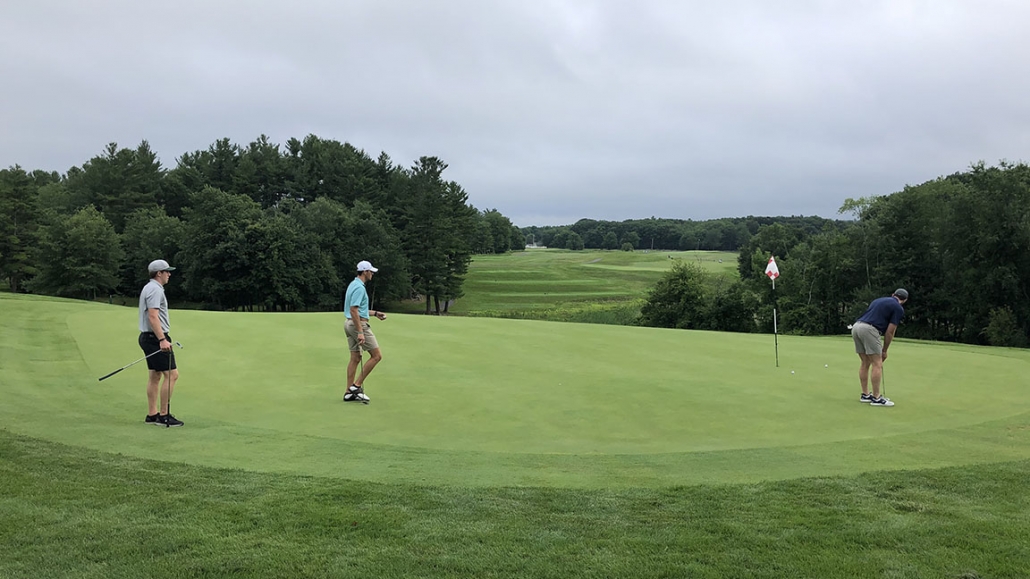 On Friday afternoon it was not what I would consider ideal golf conditions but at the same time it kind of was. A cool temperature that hovered right around 70 degrees and overcast skies. However, I can tell you that I would much rather play golf in those conditions than what we are experiencing this weekend. A little sunshine would have been nice but that was not the case when I hit the links at Kettle Brook Golf Club in Paxton to team up with Connor Doherty for a friendly match vs. Drew Callin and Ross Olsson. Often times in life people say that you can learn a lot about someone on a golf course and that is certainly true after Friday afternoon. For instance, almost seeing a hole in one on a 223 yard par 3 from a guy who said he isn’t good at par 3’s (talking about you Dotes), or losing five straight holes but then crushing two hot dogs at the turn and proceeding to win the 10th hole (what’s up Olly), or being sick of listening to your partner all day not stop talking in the cart (Cal I don’t know how you can sit in a golf cart with Olly for 4 hours).

But what people really want to know is… who won the match? Continue reading and I’ll tell you.

We went into the day knowing that the teams were going to be myself and Connor Doherty vs. Drew Callin and Ross Olsson. Give credit where credit is due, and that is to Connor Doherty who came up with the game. Essentially how it worked is that your team has the possibility to win up to two points. 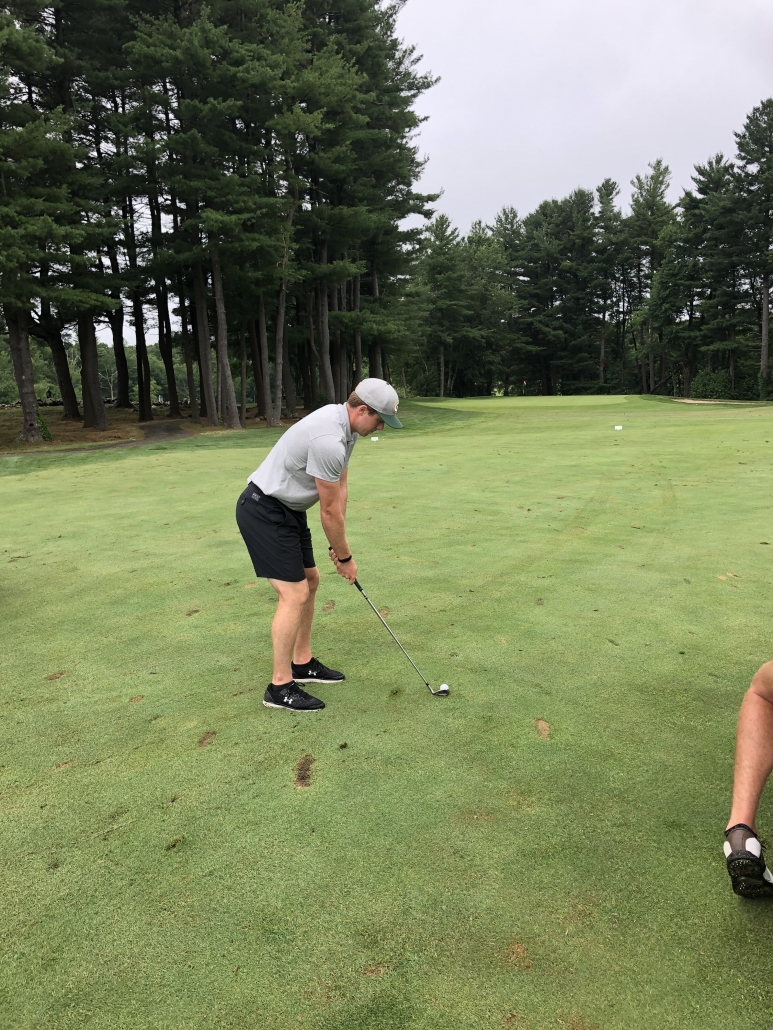 I say it every time I play golf, I said it on Friday on the first tee, and I’ll say it again, you never want to birdie the first hole. I don’t know why I think this way but there’s something about getting a birdie on the first hole that doesn’t sit well with me. Personally, I don’t make a lot of birdies (although I did make three on Friday, is that good?). So, when you birdie the first I feel like things can only get worse. After piping a drive down the middle on the first hole I left myself with a nice approach in probably right around 150yds and I stick it to about 10 feet but proceed to miss the putt. Did I miss the putt on purpose because I didn’t want to birdie? Maybe, maybe not come talk to me about it. I saved my birdie for the second hole a 572 yard par 5… driver… six iron… wedge in.. tap in 3 footer (thank you very much).

Dotes and Cam Up One Through Five Holes 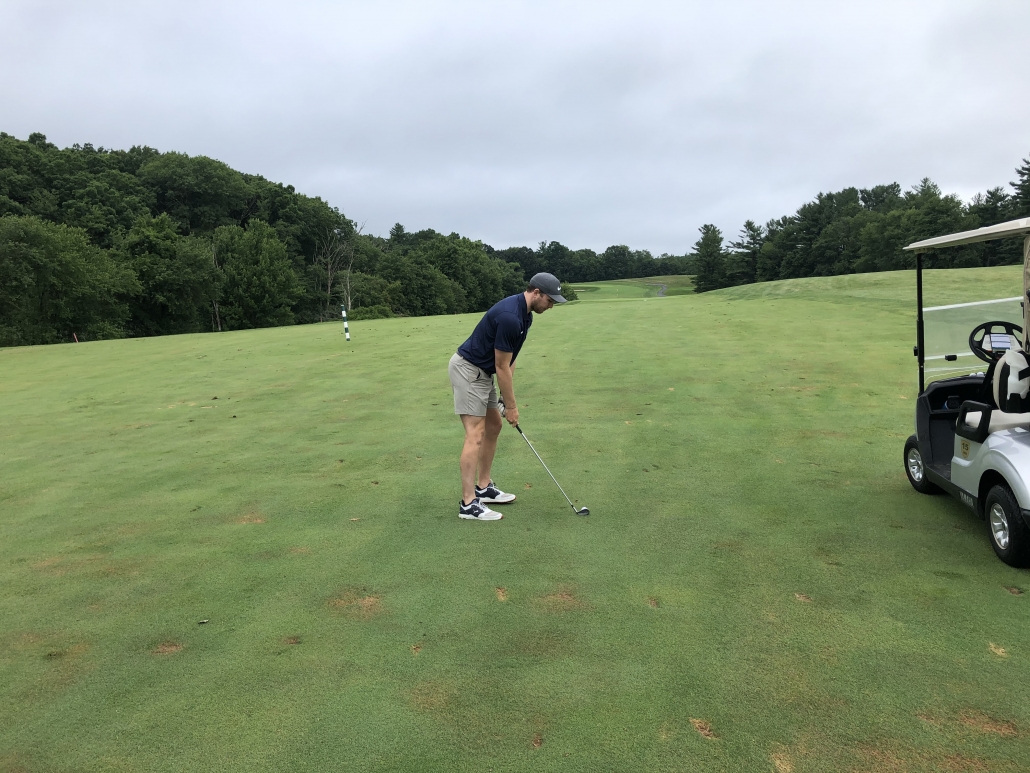 I don’t think nervous would be the right word for what I was seeing out of my partner through the first couple of holes. But +5 through the first four holes for Mr. Doherty was not what I was expecting nor what he was expecting. He did turn it around however and come up clutch in the end which we will get into later. In fact, on the 5th hole… 399yd par 4 I made an absolute terrible double bogey after muffing a chip right by the green and Dotes came up clutch with a gritty par to match the two bogeys from Olly and Cal (therefore we cam out with one point).

Off to the Races

Holes 6-9 were absolutely owned by myself and Connor Doherty. We waxed cart 14 (Olly and Cal)… we were so into their heads at this point that the match in my eyes was already in the bag for me and Dotes. Through the four holes (6-9) we collected seven points to Cal and Olly’s: 0. I would make my second birdie of the day on the 7th 511yd par 5 draining an absolute bomb. The 9th hole was easily the worst of the day for Callin and Olsson who both made double bogeys.

Scoring Through the Front 9

On to the Back 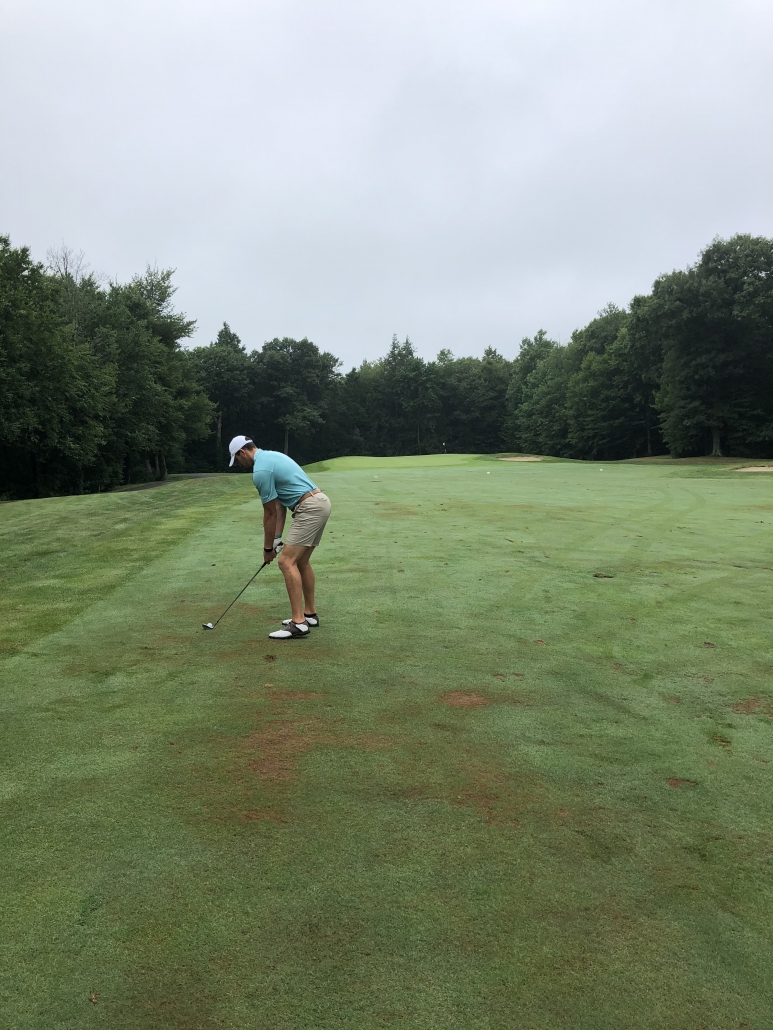 The back nine started to even out between myself/Dotes vs. Cal and Olly. We had 2 points on the back through 13 holes (so up 10 overall, match is pretty much in the bag at this point). BUT let’s not overlook the incredible birdie by Drew Callin on the par 5 506yd 14th hole after an amazing par save from Dotes draining about a 30 footer after duffing two chips in a row from about 120yd out.

Cue Up The Bus… It’s Almost Over

With only three holes to play the match is pretty much over at this point. Dotes and I had already won the front 9 and had already won the match overall. However, there still was a chance for Cal and Olly to win the back with three holes to play as Dotes and I were up two points on the back. The 16th hole we all pipe our drives down the middle on the 414yd par 4. Ross Olsson from about 150 out hits one right side of the green (he clearly pulled it) but it proceeds to hit the ridge on the right side and trickle down to about 5 feet away from the pin. Callin came up clutch with a nice little par for himself, Olly missed the birdie putt (shocker), Dotes makes a five, and I miss about a two footer for par (good bogey), they collect two points.

The Day We Almost Saw a Hole in One

17th hole… 223yd par 3.. uphill.. hand me the three wood. Drew Callin goes first (we won’t talk about his shot), Ross Olsson hits the green, I hit the green, now it’s time for Dotes. Dotes absolutely ponds one right at the pin and we are all thinking its going in. I have never seen a golf ball smack a pin so hard in my life, nearly a hole in one. Anyways, we get one back are only down 1 point on the back now.

18th hole.. 455 yd par, let’s fast forward to the green. Dotes messing around in the green side bunker long story short he chops one out, then chips it to about an inch (unreal bogey save). Drew Callin being Drew Callin collecting a GRITTY bogey. Now I smoked a four iron into this hole to about 25 feet and lag one up there leave it about 3 feet short (was not given the putt.. didn’t get one all day). Olly with a par putt from about 6-8feet a little knee knocker slider down the hill and HE MISSES!! I tap in for four (thank you very much) take your bogey Olly and not only do we get one point WE GET TWO and we win the front, back, and total. 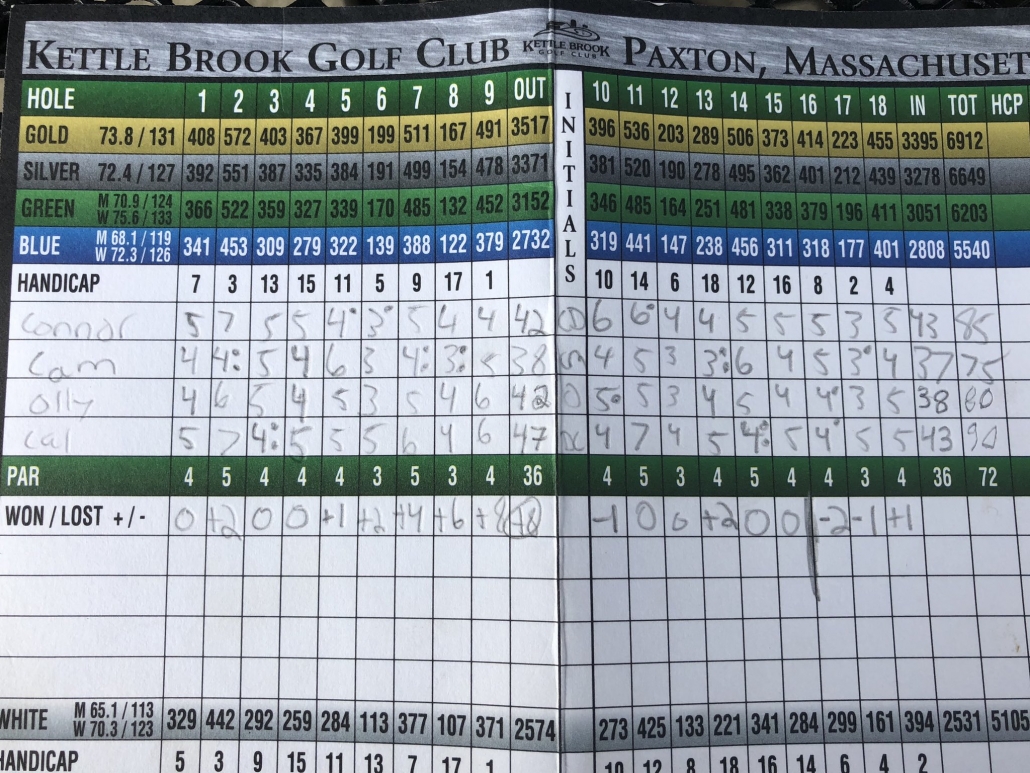 What a day out on the links first off all. Can we not overlook the +3 (75) safe to say I brought my A game and was ready to take down Olly and Cal with Dotes from start to finish. I’m sure this will not be the last match so stay tuned the rest of the summer.