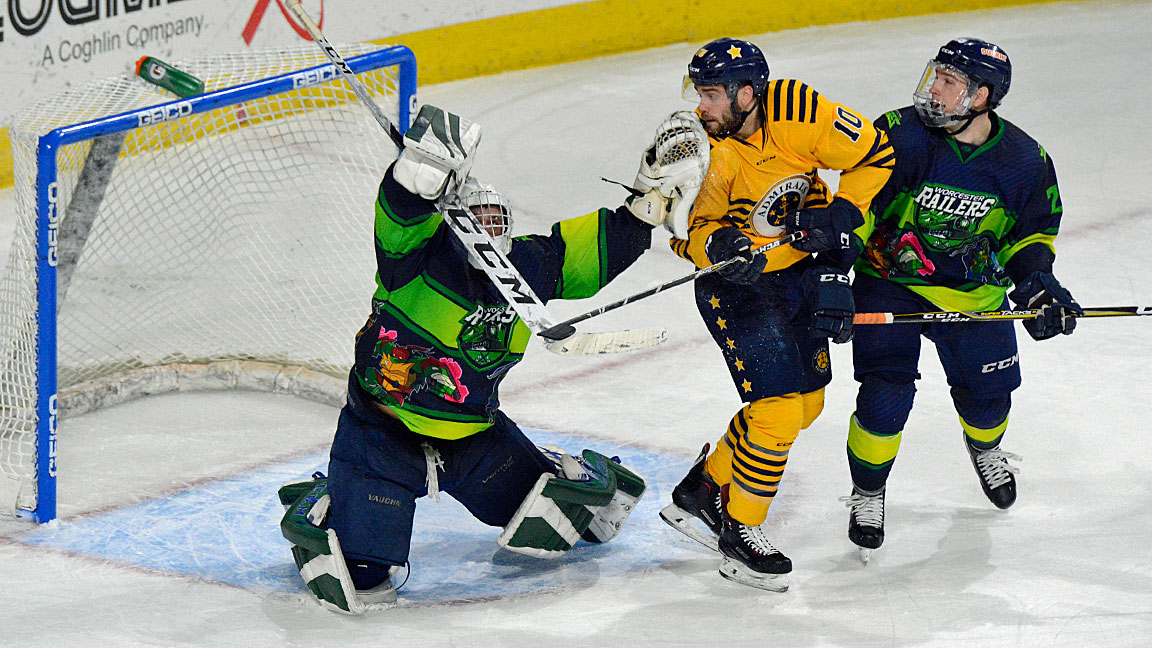 Meeting 1 of 1 vs. Norfolk this season

Worcester, MA – The Worcester Railers HC (28-22-5-4, 65pts)extended their point streak to six games (5-0-1-0) with their season high fifth straight win after an exciting 6-1 victory over the visiting Norfolk Admirals (23-30-4-3, 53pts) in front of 6,166 fans at the DCU Center on Saturday evening. With the win, the Railers remain one point behind the Manchester Monarchs and Brampton Beast for the 4th spot in the North Division. The Railers 4-in-5 stretch will conclude on Sunday with a 3pm start on STAR WARS DAY vs. the South Carolina Stingrays.

Tommy Kelley (1-1-2), Bo Brauer, Ryan Hitchcock (2-1-3), Barry Almeida (1-2-3), and Ross Olsson all scored for Worcester while Blake Wojtala made 26 saves in net in his professional debut for the win. Ty Reichenbach made 20 saves in net for the Admirals as the Railers improved to six games over .500 for the first time this season. The game featured several fights and a wild brawl with just 11.5 seconds left which included both goaltenders and all 10 skaters on the ice for a total of 111 penalty minutes in the game.

Worcester scored two goals in a 43 second span early in the first period to take a 2-0 lead.  Tommy Kelley (4th) snapped a shot from 48 feet through the pads of Ty Reichenbach at 5:36 and Bo Brauer (7th) was the trailer on an odd man rush at 6:17.  Yanick Turcotte (14th FM) dropped the mitts on the ensuing faceoff and knocked down Ludlow Harris Jr after a few quick right hands.  Goaltender Evan Buitenhuis left the game with an injury just after the three-minute mark and was replaced by Blake Wojtala who entered the game for his professional debut.  Shots were 9-6 in favor of Worcester through 20 minutes.

Ryan Hitchcock (14th) finished off a nice 2-on-1 rush with Tyler Barnes at 3:43 to give Worcester a 3-0 lead early in the second period.  Norfolk would get on the board with a shorthanded tally at 14:07 as Domenic Alberga (13th) deflected a centering feed to cut the Railers lead to 3-1.  Shots were 19-17 in favor of Worcester through 40 minutes as Worcester took a 3-1 lead into the second intermission.

Barry Almeida (19th) gave Worcester a 4-1 lead at 6:41 of the third period after another great feed by Tyler Barnes.  After David Quenneville and Ross Olsson picked up their first professional fighting majors for Worcester, Ryan Hitchcock (15th) scored on a beautiful end to end rush at  16:15 to put Worcester ahead 5-1.  Ross Olsson (1st) would score his first professional goal at 17:49 before a wild brawl broke out with just 11.5 seconds remaining.  Daniel Maggio jumped Ross Olsson which led to a wild scrum and several fights which included an altercation between both goaltenders as the Railers wrapped up with an impressive 6-1 home victory.

Notes: Three Stars: 3rd star: Tyler Barnes (0-2-2) 2nd star: Ryan Hitchcock (2-1-3) 1st star: Blake Wojtala (26 saves, Win) …. final shots were29-26 in favor of Norfolk…Ty Reichenbach (18-18-5) made 20 saves on 26 shots for Norfolk…Evan Buitenhuis made 2 saves on 2 shots for Worcester through 3:01 before he left the game injured….Blake Wojtala (1-0-0) made 26 saves on 27 shots in his professional debut…. Worcester went 0-for-3 on the power play while Norfolk went 0-for-2…. Kyle McKenzie (inj), Matt Schmalz (inj), Tommy Panico (inj), and Alex Vanier (inj) did not dress for Worcester…. Before the game, Mike Cornell and Ryan MacKinnon were recalled to the Bridgeport Sound Tigers joining Mitch Gillam and Jeff Kubiak – in addition, Nick Sorkin was recalled by the Binghamton Devils….Ross Olsson (Endicott College) and Charlie Michalowski (Dartmouth College) each made their professional debuts at the forward position for Worcester…. Bo Brauer played defense for the Railers….. the Railers are now 15-8-4-1 at home this season…Ryan Hitchcock now has 30 points (14-16-30) in his last 22 games and is on a six-game point streak (5-5-10)….Barry Almeida now has a five-game streak (4-5-9)….Tyler Barnes has points in four straight (1-4-5)…. the Railers have 13 games remaining (8 home, 5 road)… it is the first time the Railers have been six games over .500 this season….Matty Gaudreau, Ryan Hitchcock, Tyler Barnes (2), Barry Almeida (2), Tyler Mueller, Connor Doherty, and Rob Powers also added assists for the Railers….Hitchcock finished +4….Norfolk had 63 penalty minutes, Worcester had 43….Bo Brauer picked up his first fighting major with the Railers….the game featured nine fighting majors and five misconducts…it was the first time this season the Railers scored six goals on home ice….Worcester now have 45 fighting majors this season – tying their total from last season…the DCU Center was at the game for fans to view courtesy of Mercantile Center.

On Sunday, March 10 the Railers host the South Carolina Stingrays at 3pm on STAR WARS DAY on a KIDS GIVEAWAY SUNDAY!  Meet Star Wars characters and the first 1,000 kids 12-and-under will receive a light sword keychain courtesy of Advantage Truck Group! Score a SUNDAY FUNDAY ticket pack every Sunday which includes 4 ticket and 4 beers or 4 tickets and 4 sodas/popcorns starting at just $60!

Individual tickets to the Railers game start as low as $15 by calling 508-365-1750or visit RailersHC.com.  Save $$$ with a RAILERS 6 PACK which includes six flex tickets and a Railers winter hat starting at $99.