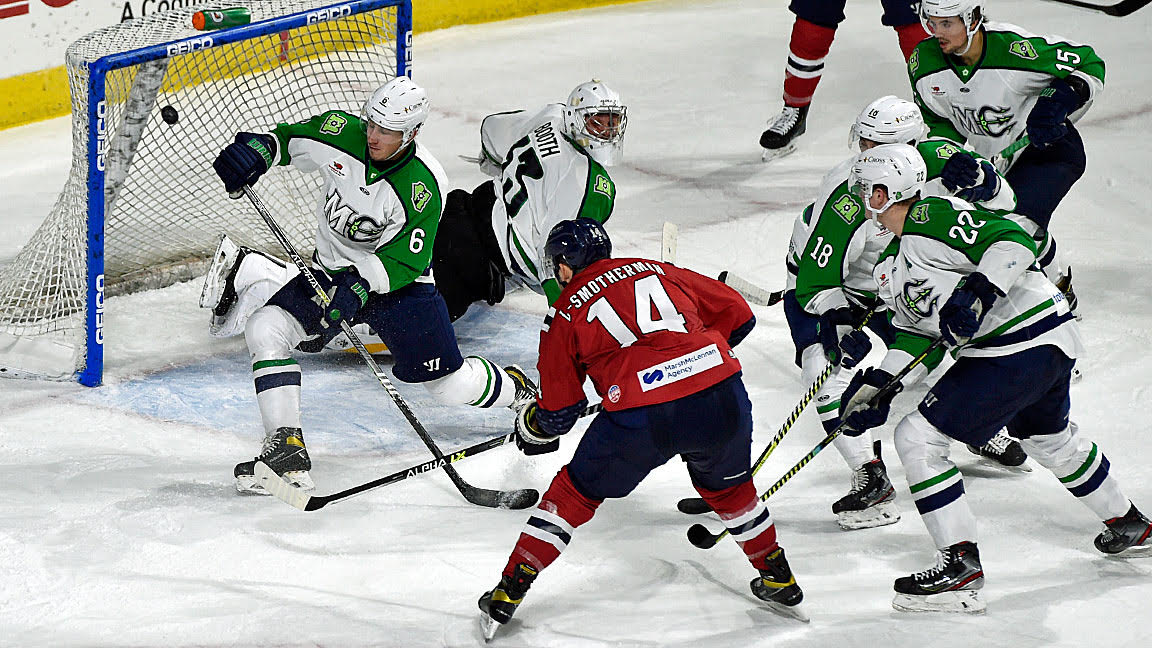 These Railers-Mariners games are so intense that fans leave the rink as tired as the players.

Saturday night was another case in point. Worcester beat Maine, 4-2, as Worcester captain Jordan Lavallee-Smotherman registered a hat trick, the final goal into an empty net, The teams have played seven times this season and there have combined for four hat tricks, three by the Mariners.

“We’ve given up three in three games in their building,” Lavallee-Smotherman said. “I feel like we owed them one.”

While not credited with an assist, the captain did help pick up the contributions to the Teddy Bear Toss after Brent Beaudoin scored the game’s first goal at 8:17 of the first period.

That first period was one of the best the Railers have played all season, the very best at the DCU Center. They outscored Maine, 3-0, and outshot the visitors, 20-1, the Mariners’ first shot coming with 13 seconds left in the first period. Lavallee-Smotherman had the two goals after Beaudoin’s.

The rest of the game was entirely different as Maine scored twice in the second period — Jake Bricknell and Andrew Romano — and the Railers played hang-on hockey for much of the final 40 minutes.

Beyond the score, Saturday’s game was an historic one, both for the Railers and the league. Laura Schmidlein made her debut as an ECHL linesperson, the first female on-official in league history.

She was recognized during the second period and got a warm ovation from the crowd, then finally gave everybody a wave after some urging from the players.

“I didn’t expect that. It was cool,” she said, “if you’re an official you don’t want to be in the limelight. The players told me to give the crowd a wave. I didn’t even know it was happening.

The ECHL’s head of officials, Stephen Thomson, watched the game from the press box and gave Schmidlein high marks.

“The first impression is courageous, to be honest,” he said. “All of the weight on her shoulders, the pressure she felt. It’s not often that officials get into the media and she handled all professionally and with courage.”

Lavalle-Smotherman’s hat trick was just the fifth in Railers history including playoffs, the second in the DCU Center. Most of the crowd of 5,060 breathed sighs of relief because Maine had been applying pressure to Worcester’s rookie goalie Jim Poreda.

“I think we thought it was going to be an easy game and they took advantage of it,” Lavallee-Smotherman said.

The game was the first one of the season’s second quarter. The Railers were 7-10-1 for 15 points. Although it wasn’t good, it was the second-best opening quarter in the four seasons Worcester has played. The best was in its inaugural season, 2017-18, when it was 8-7-3 for 19 points.

The roster-go-round continued unabated. The Railers released Ryan Cloonan after one game; the Islanders returned veteran Paul Thompson from Bridgeport; goalie Corbin Kaczperski, signed to replace Colten Ellis when he went to Springfield, came back from a quick loan to Utica; defenseman Charlie Spetz was signed by Springfield; and 20-year-old rookie forward Reece Newkirk was loaned by Bridgeport.

Worcester’s starting goalie was Poreda, signed before Friday night’s game in Springfield as Ken Appleby remains on the Covid list.

Both teams were understaffed. The Railers went with 11 forwards and five defensemen while Maine had only 15 players in uniform including five defensemen. Worcester was without forward Grant Jozefek and defensman Myles McGurty.

It was a set of circumstances that led to what has to be pro hockey first — Holden versus Holden on defense.  The Mariners had Connor Doherty, of course, and just-signed Holden native Robert Roche dressed for his second game for the Railers, first at the DCU Center.

The Railers do not play again until Dec. 17 when they open a three-in-three weekend in Reading. That’s the start of a stretch during which Worcester is scheduled to play the Royals 11 times in 14 games, seven of them on the road.

Worcester’s next home game is Dec. 26 versus Maine.

MAKING TRACKS_The special occasion jerseys, auctioned off for the Shine Initiative, had a Patriots theme and were arguably the best jerseys in Worcester pro hockey history. …The referee was Sam Heidemann for the third straight game. Such is life in the Covid world. … Poreda donned Number 30, the first-ever Railers player with that number. … The Railers had just four right-handed shots among their 16 skaters. … Newkirk, who had two assists, is from Moose Jaw, Saskatchewan, merely the third native of that province to play for the Railers. … The one shot on goal allowed in the first tied a Railers record for fewest shots allowed in a period. … Callum Booth started in the Maine net and left the game due to injury in the second period, Jeremy Brodeur taking over.