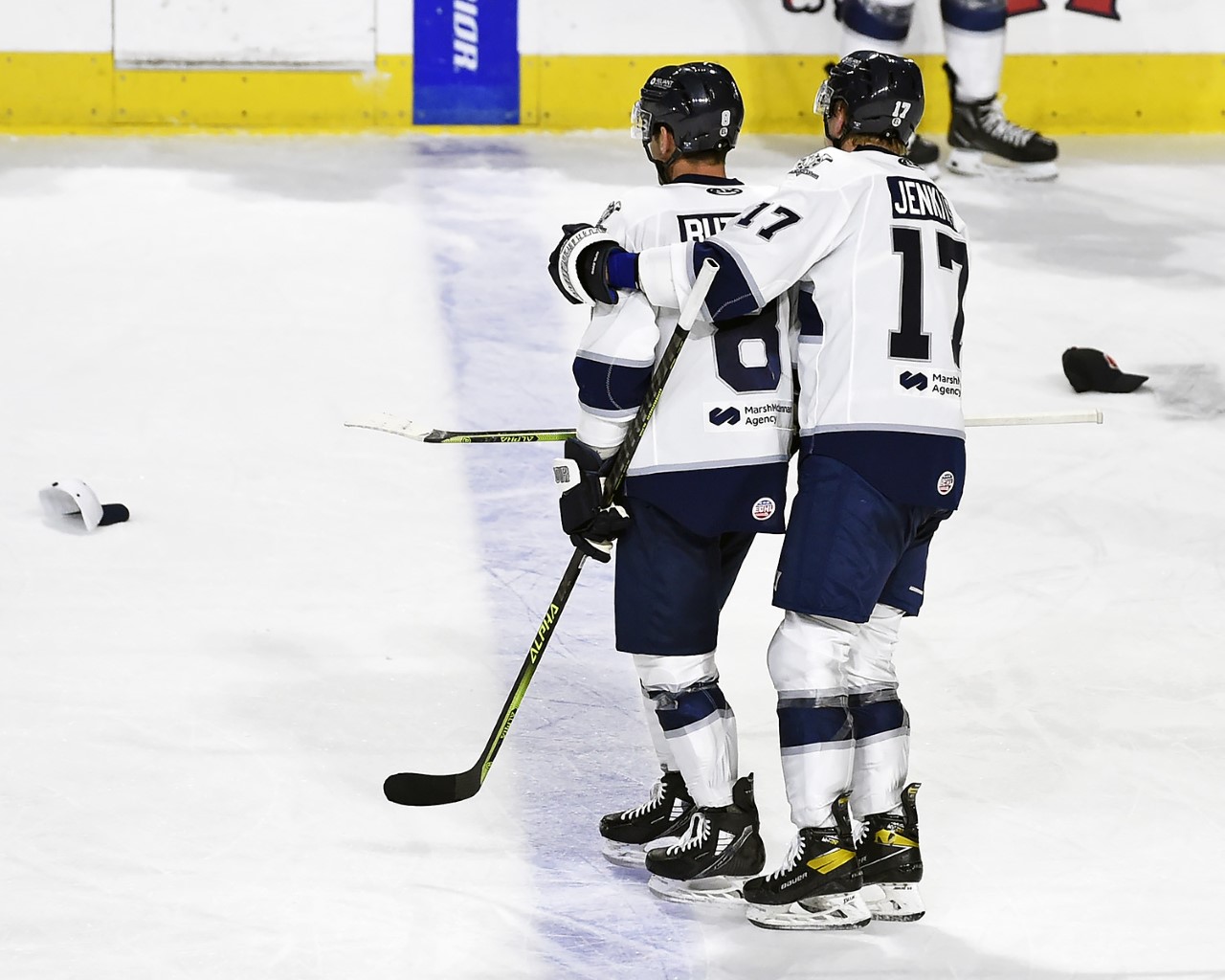 WORCESTER – The Newfoundland Growlers were just about the last team the Railers wanted to play Saturday night as they tried to dig out from under an ugly five-game losing streak.

The Growlers arrived in town in their usual spot in the standings, first place in the North Division and riding a five-game streak as well — five straight victories.

Both streaks ended via an 8-3 Railers triumph, the home team paced by captain Bobby Butler’s hat trick and Reece Newkirk’s conversion of Worcester’s first penalty shot of the season.

Butler could not remember his last hat trick. It was his first as a Railer but definitely not his first as a professional. Some quick research shows that he had one for the AHL Albany Devils on Dec. 13, 2012.

Butler had endured the losing streak that started in Newfoundland and had a succinct appraisal of what ended it Saturday night.

“We got a couple of guys back,” he said, “and we went back to playing Railers hockey.”

Both of the returnees, Collin Adams and Jimmy Lambert, scored for Worcester. Adams added two assists and is 9-13-22 in 18 games.

Newkirk missed a Gordie Howe Hat Trick by an assist. His penalty shot was at 18:35 of the second period, then he fought former teammate Matt Sredl 10 minutes into the third period. On the goal, Newkirk stuffed the puck between goalie Keith Petruzzelli’s pads after a leisurely skate in from center ice.

“Not in pro, not in junior,” was Newkirk’s recollection of his last penalty shot, “maybe when I was a little kid. I was a little spaced out when I got it because my mom and dad were watching and they give it to me for missing breakaways all the time.

Newkirk’s original plan was to go to the backhand but, he added, “I got lucky and it went through his legs.”

Liam Coughlin and Blade Jenkins had the other Worcester goals. Jenkins also had a pair of assists.

Keenan Suthers, Pavel Gogolev and Todd Skirving scored for Newfoundland which had an early lead on Suthers’ goal at 3:51 of the first period.

During its losing streak Worcester had a short roster, some tough travel and a lot of games in not a lot of days.

“Obviously, we got a couple of bodies back,” coach Jordan Smotherman said of the turnaround, “but for me, the biggest thing was rest and commitment. The guys were committed to playing the game the right way.”

The Growlers are 18-6-1 overall but the Railers are 4-1 against them so far this season with another game here Sunday afternoon. Saturday’s victory moved Worcester to within two points of first place.

Other highlights from one of the season’s most crowd-pleasing games:

Butler’s hat trick was the first of the year by a Worcester player and the first by a Railer since Smotherman’s last March 19, also versus Newfoundland. Since joining the team midway through last season, Butler has scored a goal in 13 different games and Worcester is 12-0-1 in those games.

Newkirk’s penalty shot goal made the Railers 5-for-11 in that department all-time. Worcester’s last home penalty shot was Cole Coskey’s conversion versus Reading last Jan. 14. The Railers have had just three penalty shots at the DCU Center through the years and scored on all three, Jordan Samuels-Thomas converting the other one.

Railers Sweep Newfoundland out of Worcester, 4-1
Scroll to top