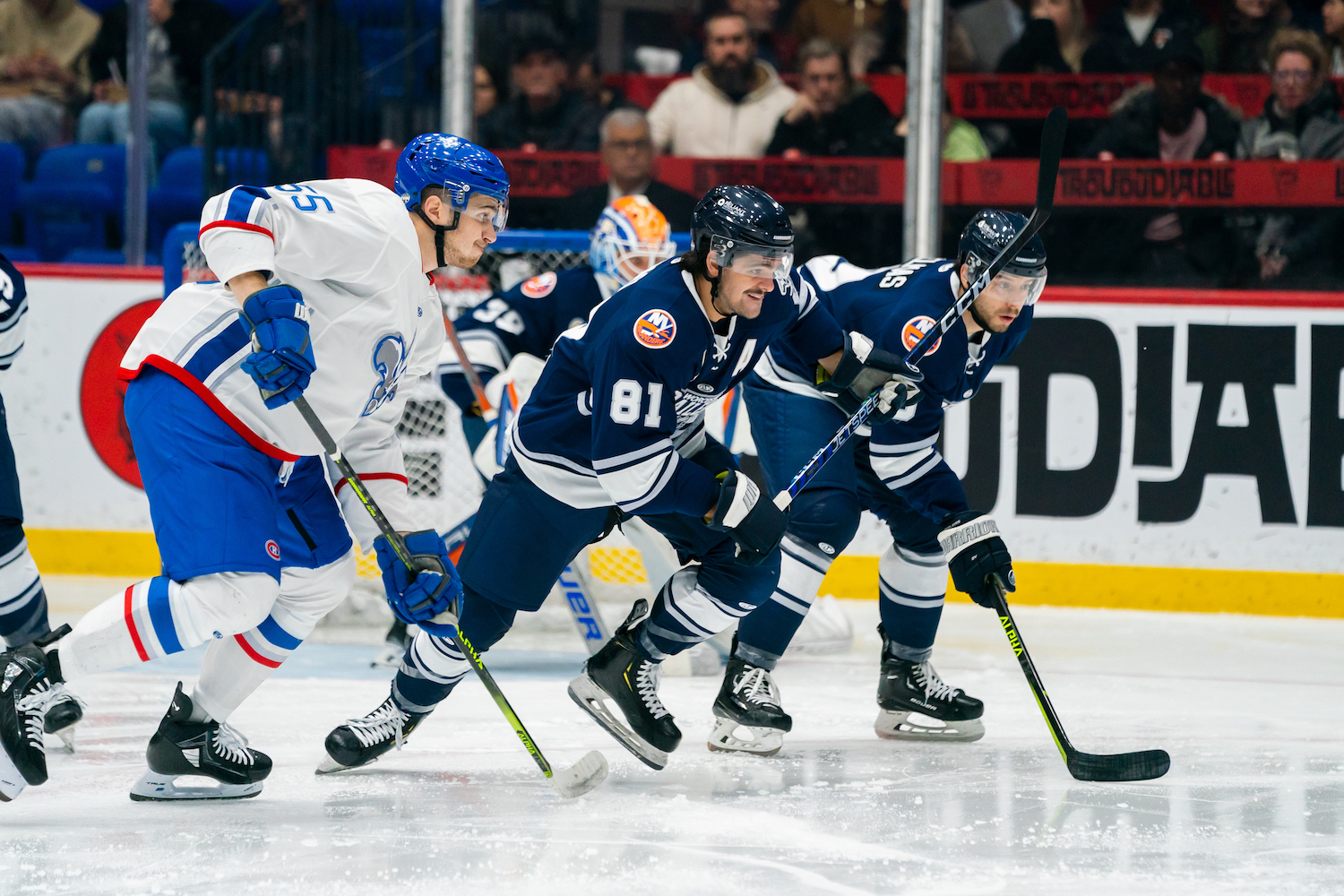 Meeting 2 of 5 vs. Trois-Rivières this season

Railers are 1-1-0-0 against the Lions this season

Quin Ryan tied for team lead in goals with eight

Trois-Rivières, QC – The Worcester Railers HC (16-4-1-0 33 points) fell 4-1 to the Trois-Rivières Lions (10-8-1-0 21 points) Wednesday night at the Colisée Vidéotron arena in front of a crowd of 2,021. The Railers ultimately went 4-2-1-0 on their season-long seven-game road trip. Worcester is back home at the DCU Friday, December 9th to face off against the Idaho Steelheads.

Anthony Beauregard (1-0-1) scored the first goal of the game for the Lions off of an assist from teammate Nicolas Guay (0-1-1). Defensemen Phillipe Bureau-Blais (1-0-1) followed up with the second goal for the Lions with three minutes left to go in the first. Oliver Galipeau (1-0-1) opened the scoring in the second period after his shot soared through traffic and past Tikkanen. Quin Ryan (1-0-1) scored the first goal for the Railers in the third period to make it 3-1 with 8:25 to go. William Leblanc (1-0-1) made it 4-1 Trois-Rivières and iced the game with his empty net goal at the end of the third.

It was a quiet start to the game with both teams trading opportunities. The Lions capitalized first, as they found themselves on a two-on-two break. They sent the puck around the boards and Nicolas Guay picked it up on the near side. He sent a pass to Anthony Beauregard (9th) in the slot, who scored the first goal of the game and made it 1-0 Lions. With about three minutes left in the first, the Lions went on a three-on-three break. Defensemen Phillipe Bureau-Blais (1st) found himself pushing the break with his teammates Pierrick Dubé and Brett Stapley. He got the puck in front of the goal and put it past Tikkanen to put Trois-Rivières up 2-0. Worcester was outshot in the first 14-11.

The first goal of the second period went to the Lions three minutes into the frame. The Lions won a faceoff in Worcester’s end of the ice. Oliver Galipeau (5th) received the puck and sent a shot through traffic past Tikkanen to make it 3-0 Lions. The Railers had plenty of opportunities to score in the second period, with a good set of shots coming toward the end of the second period on the powerplay. Phillipe Desrosiers stood tall in net for the Lions all night long, as he ultimately made 28 saves on 29 shots. The Lions ended up on the powerplay with four minutes remaining in the period and fired off a set of slap shots, none of which would find their way into the back of the net. The Railers ended the second period down 3-0. Worcester got outshot 10-16 in the second, and 30-21 through two periods.

The Lions opened the third peppering Tikkanen, who stopped every shot he faced early in the period. The highlight save of the sequence was a sliding glove save from one post to the other. Halfway through the third period, Connor McCarthy was sent to the penalty box for Worcester’s second penalty of the night. A subsequent Trois-Rivières penalty evened up play at four-on-four. While playing with some open ice, Quinn Ryan (8th) stole the puck in the neutral zone and took it across the blue line. He wristed one through two Lion defenders and past the glove of Trois-Rivières goalie Phillippe Desrosiers to give Worcester life, down 3-1. With 2:36 left to go in the game and Tikkanen pulled for Worcester, William Leblanc (4th) iced the game with an empty net goal to beat Worcester 4-1. Worcester outshot the Lions 8-7 in the third, but got outshot 37-29 on the game.