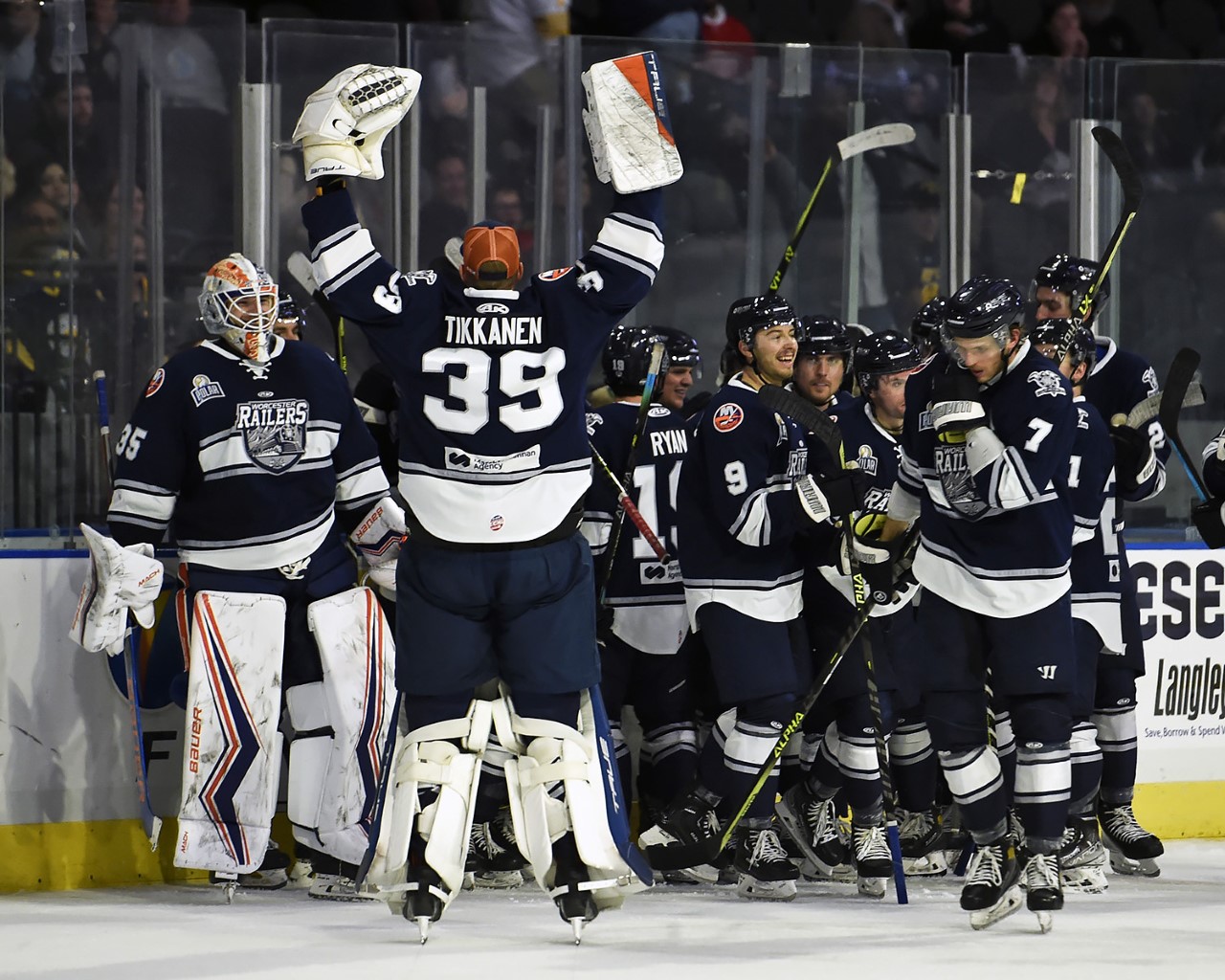 Meeting 6 of 8 vs Norfolk this season

Norfolk, VA – The Worcester Railers HC (14-2-1-0, 29 points) outlasted the Norfolk Admirals (2-15-1-0 5pts) in overtime on Saturday night by the final score of 4-3 in front of a 2,586 at the Norfolk Scope Arena in Norfolk, VA. This wrapped up the Railers’ trip to Norfolk with the team going 2-0-1-0 on the trip, with the final two games of the series going into overtime. The Railers are still on the road at the Mary Brown’s Center in St. John’s Newfoundland take on the Newfoundland Growlers on December 2nd.

The Admirals’ Liam MacDougall (1-0-1) scored the quickest goal against the Railers this season at just 42 seconds into the first period to make it 1-0 Norfolk. Jimmy Lambert (1-0-1) tied the game just six minutes later at 1-1 going into the second. There was over an hour delay after a pipe was drilled into beneath the post of the net of Ken Appleby just two minutes into the second. Once play resumed, Tag Bertuzzi (1-0-1) put the Admirals back out in front 2-1 midway through the second. Worcester tied things up again thanks to Nolan Vesey (1-0-1) scoring on the power play three minutes later, while Blake Christensen (1-0-1) put Worcester in front entering the third with his goal that came with just two seconds remaining in the second. Danny Katic (1-0-1) came back and tied things up in the third to send the two teams into overtime for the second straight game. After a goal that was waved off against Norfolk, Reece Newkirk (1-0-1) batted home a loose puck out in front to seal the victory for Worcester.

Liam MacDougall scored just forty-two seconds into the game off a deflection out in front to give the Admirals a 1-0 lead early on. He redirected Carson Musser’s shot through traffic right under the crossbar. This is the fastest anyone has scored on the Railers so far this season. Six minutes later Jimmy Lambert tied the game up with four seconds left on the power play, beating Michael Bullion glove side for the score. The game would remain tied 1-1 to end the first period. Shots in the first were in favor of the Admirals 12-10.

Two minutes into the second period, Ken Appleby made a save which knocked the net off its mooring. This drew the ice crew onto the ice to drill a hole to fix the post. The crew had drilled too far into the ice and penetrated the glycol line which ran coolant under the entire ice surface. Coolant began flooding the ice while the arena had to shut off the ice refrigeration to remedy the issue, as the teams went back to their locker rooms. There was an hour of delay before the two teams re-emerged for an eight-minute warmup to determine the playability of the ice. They played on. The net coming off its mooring became a recurring theme for the rest of the night, as the ice crew could not properly re-fasten the net. There would be a second five-minute delay midway through the second while the arena had to try and fix the post once again. Play resumed shortly thereafter. With 8:16 left in the second, the Admirals’ Tag Bertuzzi (5th) scored, giving them the lead again. Three minutes later Collin Adams would find Nolan Vesey (4th) on the two-on-one to tie the game back up. The period would end with Blake Christensen (4th) scoring on the power play to give the Railers a 3-2 lead with just two seconds left in the second. Norfolk again outshot Worcester 11-7 in the second and outshot them 23-17 on the game.     Worcester held onto their one-goal lead for just the first six minutes of the third. With fourteen minutes left to play in the third period, Ryan Foss found Danny Katic (1-0-1) on the backside of Ken Appleby to tie the game 3-3. Neither team would be able to break the tie for the remainder of the frame, sending the game into overtime. Worcester outshot Norfolk 10-8 in the stanza while they got outshot 31-27 through regulation.

In overtime, the Admirals put the puck in the back of the net past a sprawled-out Appleby, but the moorings would strike once again. The same post that had been troublesome all night long became dislodged just before the puck went into the net. The goal did not count, as overtime marched on. Michael Bullion made seven saves in the overtime period, but it wasn’t enough to stop a flurry of chances from Reece Newkirk (6th) in front, as the Railers won the four-hour-long game in overtime by a final of 4-3.