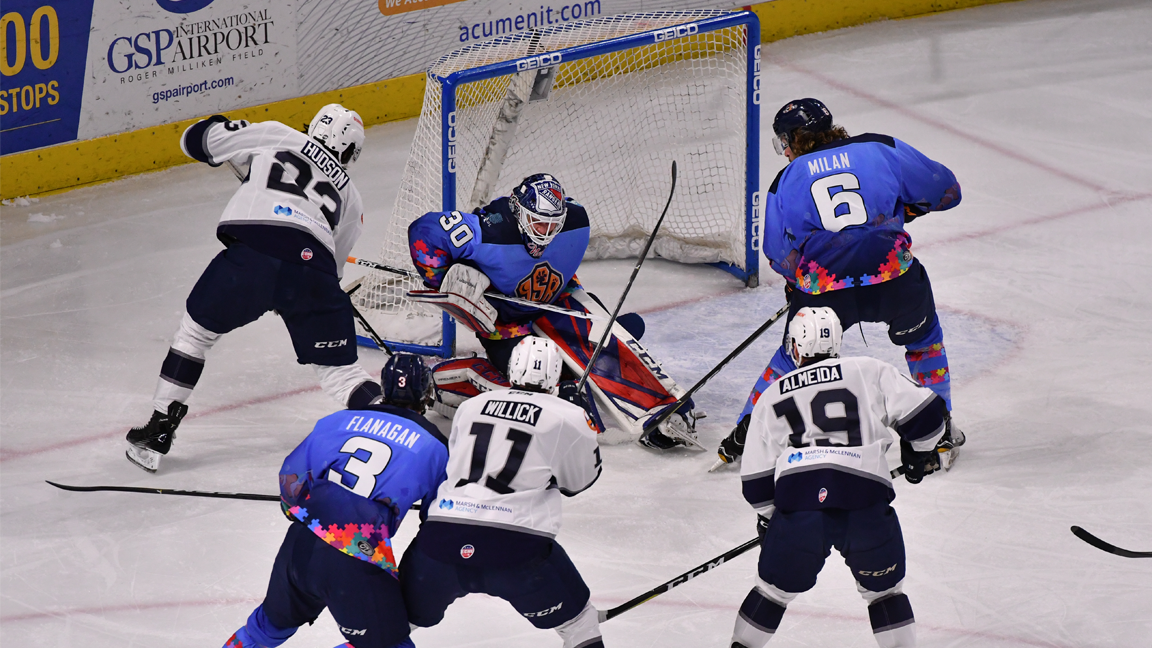 Meeting 2 of 3 vs. Greenville this season

GREENVILLE, SC – The Worcester Railers HC (14-16-3-2, 33pts) wrapped up their three game South Carolina road trip with a 3-2 win over the hostGreenville Swamp Rabbits (14-19-3-2, 33pts) in front of 2,975 fans at the Bon Secours Wellness Arena on Sunday afternoon. The Railers return home for a GILLY GILLY bobble giveaway on a BIG GAME Saturday with a 7pm puck drop on Jan 12 vs. the Reading Royals.

Tyler Barnes, Bo Brauer, and Barry Almeida scored for Worcester while Mitch Gillam made 28 saves in net for Worcester for his 9th win of the season.  The Railers had a 3-0 lead through two periods of play before Greenville made the game interesting with a pair of third period goals but Worcester was able to hold on for the 3-2 win.

Worcester had an excellent road first period outshooting Greenville 14-7 and took a 1-0 lead into the first intermission.  Tyler Barnes (11th) stationed on top of the crease, deflected a Mike Cornell point shot that got through netminder Chris Nell at 2:27 on the power play for the only score of the period.  Mitch Gillam was sharp with seven saves through 20 minutes.

Bo Brauer (1st) scored his first professional goal as Tommy Kelly threw the puck in front of the net and Brauer was able to sweep the puck and chip it over the shoulder of Chris Nell at 12:48.  Veteran Barry Almeida (10th) snapped a shot from the right circle with Woody Hudson providing a screen which found the back of the net at 19:11 to give Worcester a 3-0 lead through 40 minutes.  Worcester held a 32-13 shot advantage through two periods of play.

Brendan Harms (6th) scored on a wrap-around opportunity just 52 seconds into the third period to get the Swamp Rabbits on the board.  Garret Milan (2nd) snapped a quick shot from 40 feet through a screen at 7:35 to cut the Railers lead to 3-2.  Goaltender Mitch Gillam missed an empty net goal by a foot with just over a minute left and the Railers held off a late charge for their first win on the calendar year.

Notes: Three Stars: 3rd star: Andrew Larkin (0-2-2) 2nd star: Garrett Milan (1-0-1) 1st star: Barry Almeida (GWG) …. final shots were 41-30 in favor of Worcester…. Chris Nell (9-10-2) made 38 saves on 41 shots for Greenville…. Mitch Gillam (9-9-1) made 28 saves on 30 shots for Worcester…. while Mitch Gillam served as the backup…. Worcester went 1-for-3 on the power play while Greenville went 0-for-3…. Kyle McKenzie (inj), David Quenneville (inj), Alex Vanier (susp), Yanick Turcotte (susp), and Malcolm Gould (inj) did not dress for Worcester…. Jeff Kubiak, Ryan Hitchcock, and Matty Gaudreau are currently on recall with the Bridgeport Sound Tigers… Alex Vanier (1 game) and Yanick Turcotte (review from ECHL) were each suspended by the ECHL for their parts in the third period brawl vs. the Swamp Rabbits on Saturday…. Worcester improves to 6-10-0-1 on the road this season…. with the assist, defenseman Ryan MacKinnon now has points in six of his last seven games…. Matt Schmalz and Dylan Willick also picked up assists for the Railers…. Josh Holmstrom led Worcester with five shots on goal.

On Saturday, January 12 the Railers host the Reading Royals at 7pm on a BIG GAME SATURDAY!  The first 3,000 fans will receive a GILLY GILLY bobbleheadcourtesy of BLUEROCK ENERGY!  Score the first bobblehead of the season and yell GILLY GILLY!  Tickets are as low as $15.