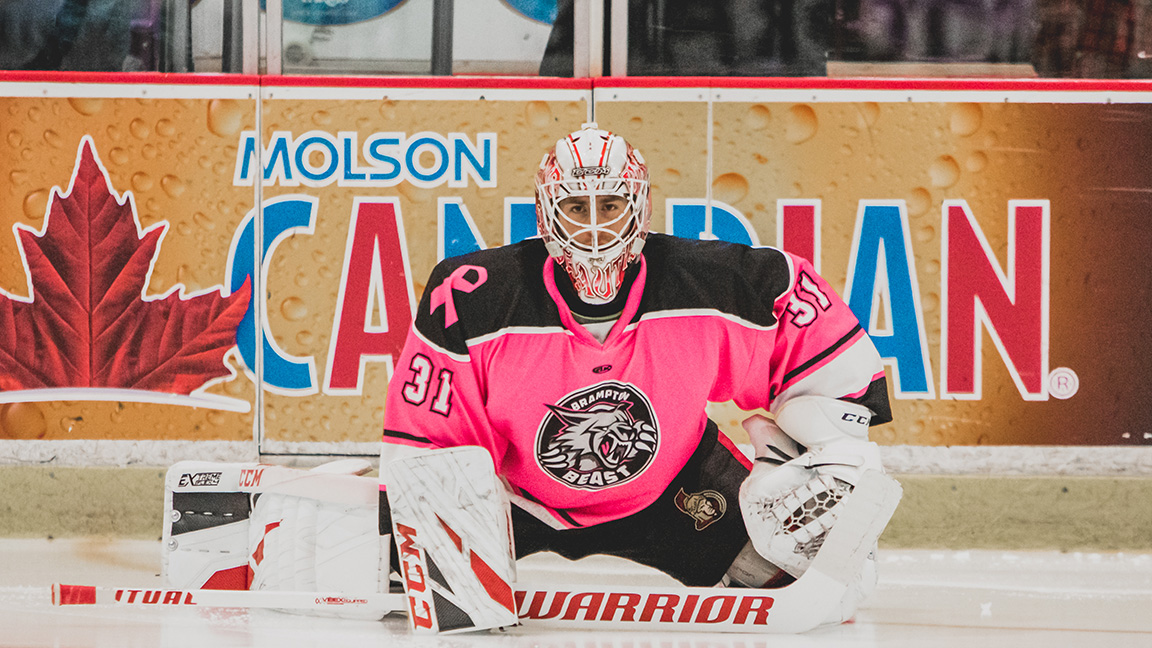 Meeting 2 of 8 vs. Brampton this season

Worcester Railers stumble 6-0 in Brampton to the Beast

Brampton, ON– The Worcester Railers HC (3-3-0-0, 6pts) finished their four game road stretch with a 6-0 loss to the host the Brampton Beast (4-2-0-0, 8pts) on Sunday afternoon in front of 2,029 fans at the CAA Centre. The Railers are back in action on Friday, November 1 at the DCU Center for Hockey Fights Cancer Night hosting the defending Kelly Cup Champions the Newfoundland Growlers at 7pm.

The Railers were shutout for the first time this season as the Brampton Beast prevailed 6-0 with six different goal scorers. Worcester was unable to score on the power play despite having seven opportunities. Evan Buitenhuis came in relief for Linus Soderstrom with just 5:28 left in the second period and made 13 saves on 14 shots in a game that featured 66 PIMS.

It was a fast and physical first period with 12 total penalties assessed and the Beast would score the only goal of the frame after Linus Soderstrom stopped Chris Clapperton on a breakaway, Matt Mcleod (1st) was able to slam home the rebound shorthanded giving the Beast a 1-0 lead at 18:05. Worcester was able to kill off all five shorthanded chances and outshot Brampton 10-5 through 20 minutes of play.

Things did not go the Railers way in the second period as Nathan Todd (4th) and Jackson Leef (1st) each struck on the power play giving Brampton a 3-0 lead just 4:05 into the frame. The Beast would add onto their lead as Francois Beauchemin (3rd) beat Linus Soderstrom glove side from the left circle at 11:20. Just 3:12 later Lindsay Sparks (2nd) tapped home a rebound as Linus Soderstrom’s night came to an end allowing five goals on 16 shots at 14:32. Despite being down 5-0 the Railers outshot the Beast 19-17 through 40 minutes of play.

The power play answered once again for Brampton in the third period as the Beast scored their third power play goal of the game courtesy of TJ Melancon (2nd) who received a feed at the bottom of the left circle and jammed it home making it a 6-0 lead at 16:10. Seven more penalties were called in the third period as Worcester was shutout for the first time this season.

Notes: Three Stars: 3rd star: TJ Melancon (1-2-3) 2nd star: Michael Mcleod (1-1-2) 1st star: Alex Dubeau (27 saves, win, shutout) final shots were 30-27 in favor of Brampton…Alex Dubeau (2-0-0) made 27 saves on 27 shots for Brampton … Linus Soderstrom (1-1-0) made 11 saves on 16 shots for Worcester while Evan Buitenhuis served as the backup and came in relief in the second period and finished the game with 13 saves on 14 shots…. Worcester went 0-for-7 on the power play while Brampton went 3-for-9…. Henrik Samuelsson (inj), Ivan Chukarov (inj), Cody Payne (inj), Anthony Florentino (inj), and Chris Rygus, did not dress for Worcester…. Barry Almeida and Nic Pierog tied for a team high with four shots on goal….Worcester allowed their first short handed goal of the season…. Justin Murray tied for a game high 10 PIMS…. Worcester is now 7-7-1-2 all-time vs. the Beast and 2-4-0-2 at the CAA Centre.

Worcester Railers fall 5-2 in Brampton to the Beast