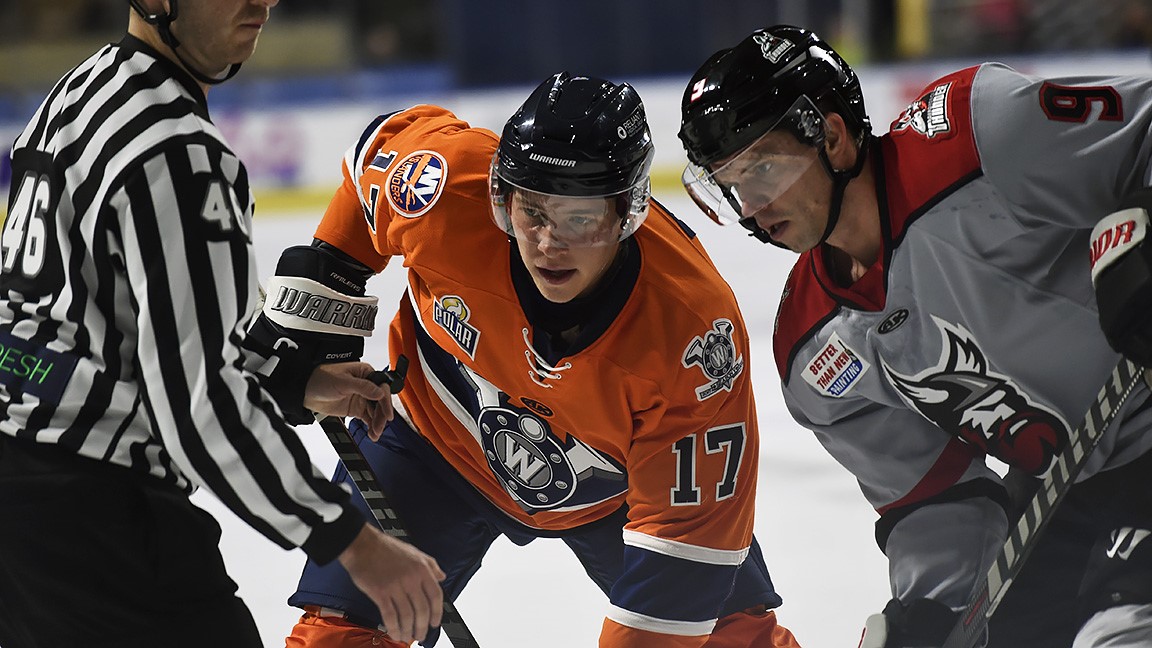 WORCESTER – It was not a perfect game, but it was a perfect start to the Railers’ fifth season in town.

Worcester beat the Adirondack Thunder, 5-4, Saturday night before a crowd of 7,116 to improve their record in home openers to 5-0-0, and its record in opening games overall to 4-1-0. It was also a perfect start to Jordan Lavallee-Smotherman’s coaching career.

The Westborian debuted as the eighth coach in Worcester hockey history and is the fifth one to win his first game. The debut came just a few months after his playing career ended.

What about the adjustment?

“I was absolutely more nervous as a coach than as a player,” Smotherman said. “As a player, I know I could at least try to take over the game. As a coach it’s in the players hands.”

Railers players completely took over the game for its first 12 minutes.

They got goals from Brent Beaudoin, Blade Jenkins and Noah Delmas to burst out to a 3-0 lead. At that point in time it looked like the Railers might not only go undefeated for 2022-23, but never even allow a goal.

Predictably, those dreams ended. However, they ended faster than expected.

Xavier Parent scored for the Thunder at 14:00, just 2:02 after Delmas.Noah Corson made it 3-2 at 14:49 as Adirondack converted a power play chance just 15 seconds after a penalty to Collin Adams. Worcester protected that 3-2 lead into the second period, but Vladislav Mikhalchuk tied the game for the Thunder at 3:51.

“We stopped managing the puck,” was Smotherman’s diagnosis of the Railers’ skid.

However, Worcester bounced back nicely as Reece Newkirk scored at 8:15 to put the Railers back in the lead, 4-3. Jenkins got his second of the night at 7:30 of the third period to make it 5-3 and the Railers survived a shorthanded goal by Sebastian Vidmar to hold on for the victory.

Jenkins, by the way, is just the second Railers player with two goals in his Worcester debut. Devon Paliani did it on Dec. 29, 2021 in Maine.

Newkirk also had an assist for a two-point game and Jacob Hayhurst had a pair of assists to help goaltender Ken Appleby record the victory.

Beaudoin fired a wrist from the slot along the ice and past Thunder goaltender Mark Mitens to make it 1-0 lead at 1:24 of the first period. It was the earliest goal to start a season in team history. Beaudoin joined Wade Murphy, Barry Almeida, Jordan Samuels-Thomas and Nick Albano on the list of first-goal scorers.

About five minutes later Worcester made it 2-0 on Jenkins’ goal from about 15 feet out, the Railers taking advantage of a turnover. Jenkins was set up by a pass from Newkirk. Delmas finished off what became a 4 on 2 at 11:58, Hayhurst putting the play in motion.

The nature of the game turned quickly, though, as Parent made it 3-1 at 12:51 from between the circles and Corson converted a power play at 14:49 after some tic-tac-toe passing.

Adirondack completed its comeback early in the second period as Mikhalchuk snuck one past Appleby from  just outside the right post. The Railers were still creating chances, but not converting, at least until Newkirk beat Mitens from the left side at 8:15, being set up perfectly by Hayhurst.

Jenkins’ second goal was hard wrist shot from the right circle and Vidmar’s goal was on a breakaway.

Smotherman resisted any urges to just jump over the boards and get into the play, although it was hard as his team protected its narrow lead in the final minute.

“The first moment I missed being a player,” he added, “was when I was out there watching warmups.”

Smotherman will get used to that, for sure. He’s hoping he also gets used to watching his team warm up, then win.

MAKING TRACKS_The Railers honored the late Eric Lindquist, who was part of the Worcester hockey scene for some 15 years as a broadcaster and liason with the public. Before the game, the video board featured some highlights from his time in Worcester. Also, the DCU Center press room has been renamed in honor of him including a plaque with his picture on it. … This was a double debut for the coaches. Adirondack’s Pete MacArthur was also working his first game as a pro head coach. … ECHL commissioner Ryan Crelin was in the building and headed north to Portland after the game. … The respective lineups featured three ex-Railers. They were, namely, fan favorite Yanick Turcotte, Ivan Chukarov and Ryan MacKinnon. One catch — MacKinnon played for Worcester. He is back with the Railers on loan from their AHL partner in Bridgeport and was a team-high plus-3. … The teams meet again at 3:05 Sunday at the DCU Center. … Trevor Cosgrove and Jimmy Lambert made their professional debuts for the Railers. … It may have been opening night jitters for the ice surface since there a lot of players who were falling down sober. … The Railers have won six straight against Adirondack at the DCU Center dating back to last December. They are 6-3-0 all-time versus Mitens.