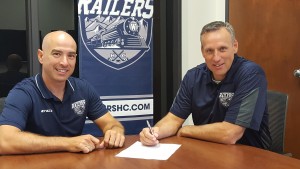 Worcester, MA – The Worcester Railers Hockey Club (@RailersHC), proud member of the ECHL (@ECHL), and Railers President Michael G. Myers officially announced today that JAMIE RUSSELL has been named the team’s General Manager and Head Coach.  Per club policy, terms of the deal were not disclosed.

Russell, 50, spent two seasons (2014-16) with the Elmira Jackets (ECHL) as their head coach and director of hockey operations and compiled a record of 69-66-12.  Prior to his time in Elmira, Russell spent three seasons from 2011-14 at Providence College (Hockey East) as an assistant coach and helped guide the Friars to their first NCAA tournament in 13 seasons in 2014.

“After an extensive search we are pleased to have someone with Jamie’s background and unique skill set on board for our inaugural season in the ECHL,” said Myers.  “I am confident that Jamie will put a winning product on the ice year one and look forward to him getting entrenched in the central Massachusetts community.”

“I would like to thank Mike Myers and Cliff Rucker for this tremendous opportunity in Worcester,” said Russell.  I can’t wait to hit the ground running to make sure that the Railers are ready to compete and win come October 2017.  My family and I are excited to become a part of the Worcester community for the seasons to come.”

Prior to his coaching career, Jamie played collegiate hockey at Michigan Tech from 1987-89 before turning pro and playing two seasons in Winston Salem (ECHL) in 1989-91.  Russell also played defense for the Binghamton Senators during the 1989-90 season. Jamie has a Master of Business Administration from Lake Superior State University and a Bachelor’s degree from Michigan Technology University.

Russell and his wife, Linda, have three sons (Ben 18, Charlie 13, Graeme 11) and are expected to move to central Massachusetts before the start of the 2017-18 season.

Railers members and fans will have the opportunity to meet Jamie Russell at a special event on October 14.  More information will be provided at a later date.

The Worcester Railers, a proud member of the ECHL, will hit the ice in October 2017 at the DCU Center.  To become a Railers Hockey Club member or for more information please visit www.RailersHC.com or call 508-365-1750.