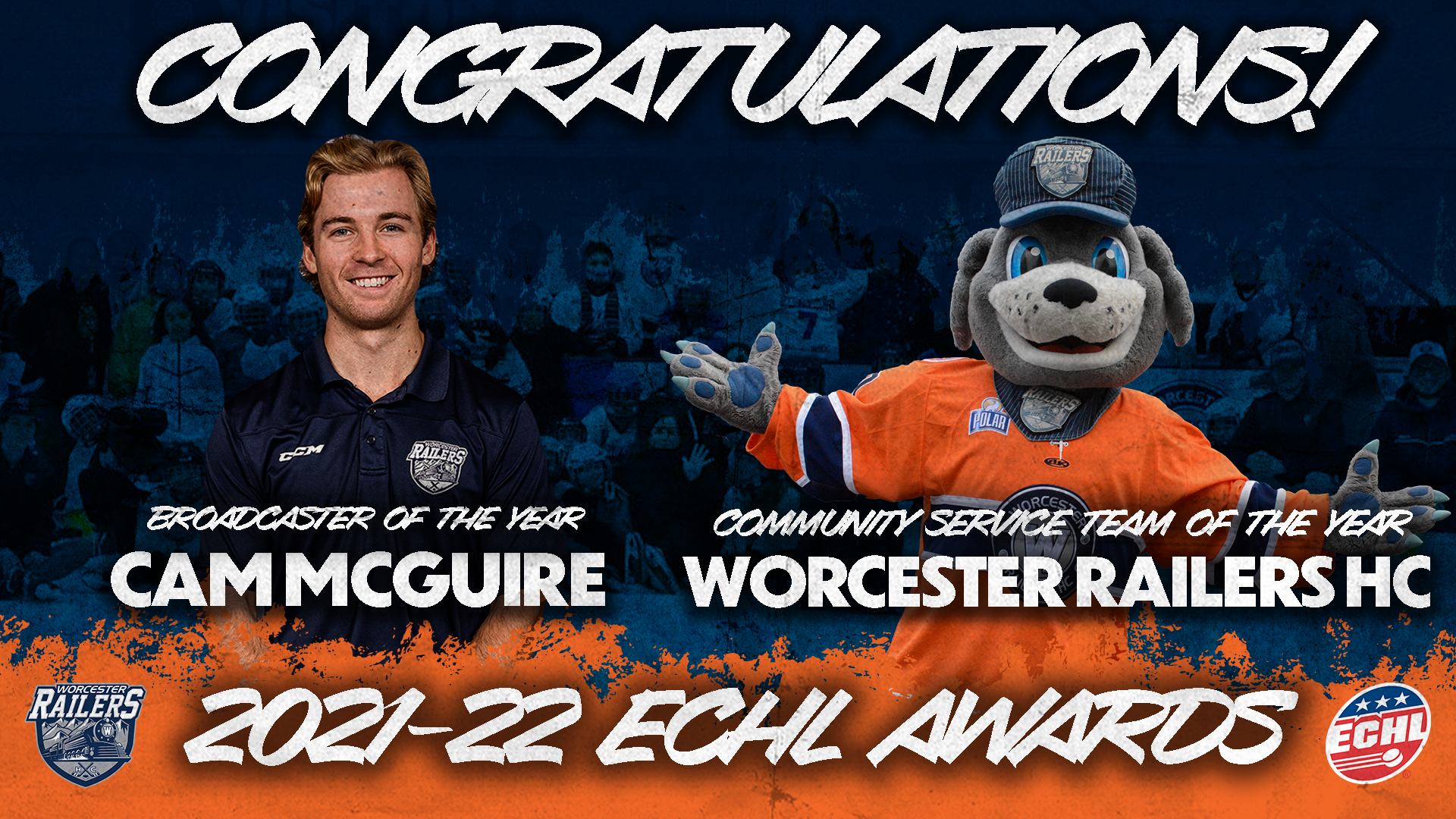 WORCESTER, Mass. – The Worcester Railers Hockey Club (@RailersHC), proud ECHL (@ECHL) affiliate of the New York Islanders (@NYIslandrers) announced today that the ECHL has named the Railers a co-recipient of the 2021-22 ECHL Community Service Team of the Year Award. This is the fourth straight year the Railers have received the award, but it is the team’s first time sharing the title with the Rapid City Rush. Additionally, Railers Manager of Communications, Broadcasting & Hockey Operations Cam McGuire was named the 2021-22 ECHL Broadcaster of the Year. Winners were announced on Wed., June 29th at the ECHL Hockey Summer Meetings in Las Vegas.

The Railers were selected as a co-winner of the 2021-22 ECHL Community Service Team of the Year award in recognition of the team’s commitment on being a leader in the greater Worcester community. For the fourth consecutive season, the Railers set the bar high with a community-first approach, spending over 1,000 hours volunteering and impacting 514 organizations. With support from the Worcester Railers HC Booster Club, the Railers HC Foundation donated more than $200,000 to deserving charitable efforts over the course of the season.

“It is truly an honor to receive this award for the fourth consecutive year,” said Railers Chief Operating Officer Mike Myers. “It is a full team effort starting with our owners Cliff and Susan Rucker, our front office staff, community relations department led by Paul Harris, our interns, hockey staff and players, corporate partners and members, the Booster Club, and our mascot TRAX. We are honored to receive this award and will work to make it five-in-a-row next year as we continue our community first mentality.”

“The Worcester Railers are community first,” said Community Relations Manager Paul Harris. “Our goal every season is to make the largest impact we can and we are thrilled to receive this award for the fourth straight year. We are fortunate to be able to give back to the community in a really big way.”

The other finalists for Community Service Team of the Year were the Kalamazoo Wings, Rapid City Rush (co-recipient), South Carolina Stingrays, and Utah Grizzlies.

Railers Manager of Communications, Broadcasting & Hockey Operations Cam McGuire was named the 2021-22 ECHL Broadcaster of the Year for exemplifying unwavering on-air professionalism and creating interesting and engaging content that showcased excellence and storytelling. McGuire joined the Railers in June of 2019 after graduating from Lake Forest College with a degree in communications and business. During the 2019-20 season, he joined Eric Lindquist on the airwaves for all Railers games on ECHL TV and 98.9 Nash Icon. This past season, McGuire served as the lone voice for all Worcester Railers games. On air, he combined a deep knowledge of the game with a lighthearted personality to engage listeners. He also filled in for AHL broadcasters multiple times this past season.

“I am extremely excited for Cam to be recognized with this award,” Myers said. “Cam has been a tremendous asset to our organization since his first day on the job and is a true professional. His broadcasts are informative and his great sense of humor shines through on and off the air. We are thrilled that Cam is being recognized by the league for all of his hard work.”

Over the course of three years with the team, McGuire has served in a variety of capacities including broadcasting, media/public relations, marketing, social media, and hockey operations.

“It is a true honor to be recognized with this award,” said McGuire. “I can confidently say that this award could have been given out to any broadcaster in the ECHL because they are all so deserving. Worcester has been an unbelievable place to begin my career and I cannot thank the organization, fans, and players enough for all of their support over the years. I would also like to thank my former boss, mentor, but most importantly, dear friend Eric Lindquist for taking me under his wing three years ago. This award would not be possible without him.”

The Worcester Railers were a finalist for the 2021-22 Team Award of Excellence for the best aggregate compilation of total ticket and corporate sales, attendance, food and beverage purchases, merchandise sales, community involvement, and game operations. Other nominees included the Florida Everblades (winner), Fort Wayne Komets, Indy Fuel, and Idaho Steelheads.

The Worcester Railers HC 2022-23 Opening Weekend at the DCU Center is Sat., October 22nd and Sun., October 23rd vs. the Adirondack Thunder. Season memberships for the 2022-23 season and group packages are on sale now by calling the Railers front office at 508-365-1750 or by visiting RailersHC.com.