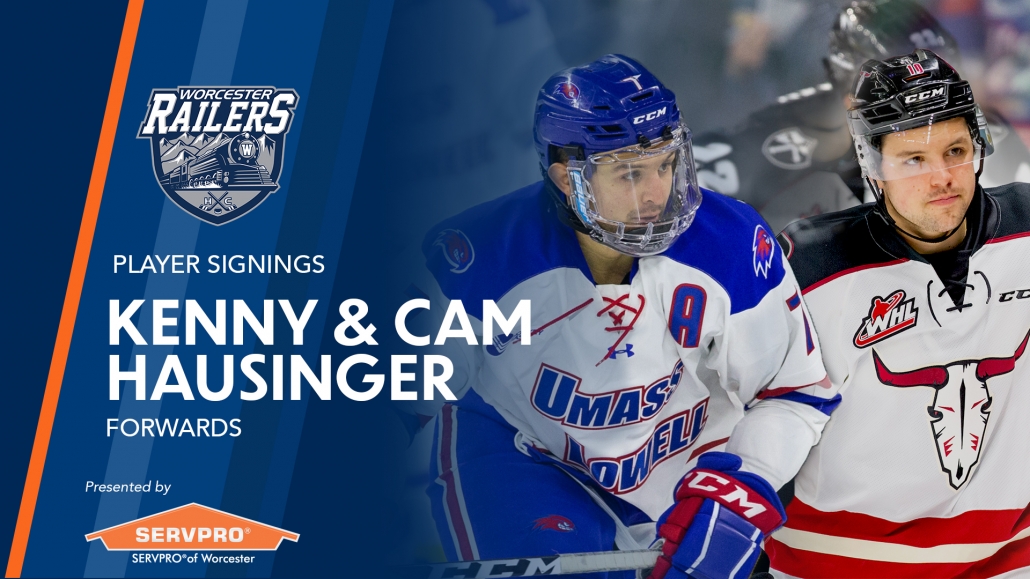 Cam Hausinger enters his first professional season after spending the last five seasons in the Western Hockey League (WHL) with the Saskatoon Blades, Kootenay Ice, and the Red Deer Rebels. Last year, the 21-year-old served as an assistant captain for the Red Deer Rebels registering 38 points (13 goals, 25 assists) in 61 games along with 84 penalty minutes and six fighting majors. From 2015-2020, the 5-foot-10 191lb forward played 317 games in the WHL amassing 161 points (68 goals, 93 assists). The scrappy Anchorage, AK native was no stranger to dropping the gloves as he registered 30 fighting major in his five WHL seasons along with 335 penalty minutes.

Kenny Hausinger enters his first professional season after wrapping up a four-year career at UMass Lowell (2016-2020) accumulating 79 points (39 goals, 40 assists) in 134 games. The 5-foot-9 195lb forward finished in the top four on the Riverhawks in scoring during his last three seasons and won a Hockey East Championship in 2016-17. Prior to college hockey, the 24-year-old spent the 2015-16 season in the United States Hockey League (USHL) leading the Des Moines Buccaneers in scoring notching 48 points (16 goals, 32 assists) in 60 games. The Anchorage, AK native was also named to the North American Hockey League (NAHL) All-Rookie Team in 2014-15 leading the Odessa Jackalopes in scoring recording 68 points (25 goals, 43 assists) in 57 games.

“Cam and Kenny are going to be great new additions to our hockey club,” Cunniff said. “They are very similar in the fact that they possess offensive ability on top of being very gritty and hard to play against. Kenny put up solid numbers statistically in Hockey East and can play all ends of the ice. As for Cam, he brings five years of experience from a very tough Western Hockey League and was able to improve his numbers offensively each year.”

Cam and Kenny Hausinger will be the second set of brothers to play for the Railers joining Chris and Nick Saracino. The two will also be the first Alaskan born players to suit up for the Railers. The Railers now have six players signed for the 2020-21 season as Kenny Hausinger and Cam Hausinger join Drew Callin, Ross Olsson, Connor Doherty, and Jordan Smotherman. All player signings this offseason are brought to you by SERVPRO of Worcester, with more announcements expected over the next few weeks. Click HERE for the most up to date roster.