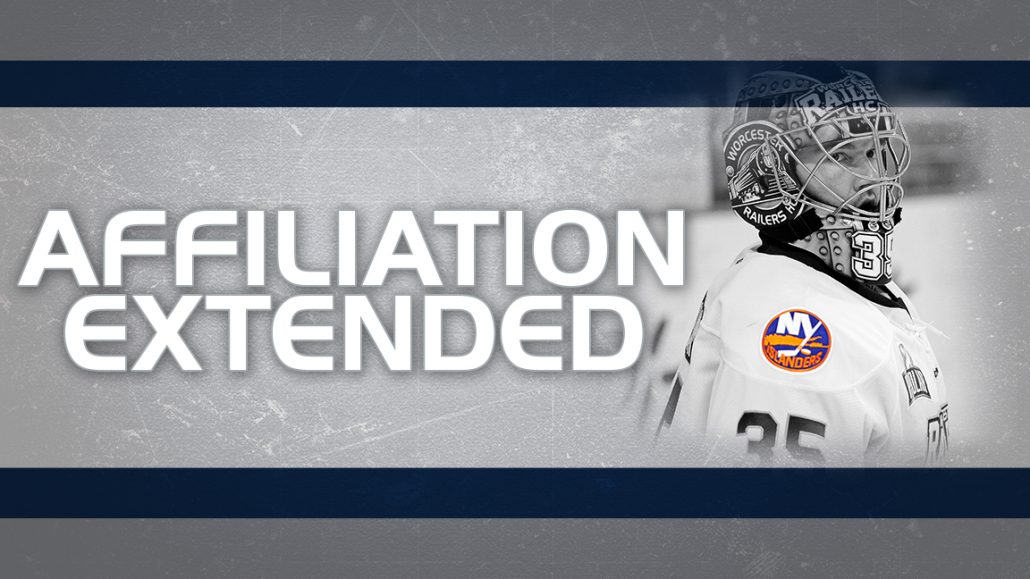 The Bridgeport Sound Tigers will continue to serve as AHL affiliate

Worcester, MA– Worcester Railers Hockey Club(@RailersHC) President Michael G. Myers announced today that the club has extended their affiliation agreement with the New York Islanders (@NYIslanders) of the National Hockey League (@NHL) through the 2019-20 season. Worcester and the Bridgeport Sound Tigers (@TheSoundTigers) of the American Hockey League (@TheAHL) will continue to serve as the minor-league affiliates for the Islanders organization.

The Railers will play 36 home games at the DCU Center during the 2018-19 season and continue to practice and train at the 110,000-square foot Fidelity Bank Worcester Ice Center, located in the heart of the Canal District in Worcester.

“The Worcester Railers are thrilled to extend our affiliation with the New York Islanders,” Railers HC General Manager and Head Coach Jamie Russell said. “We are looking forward to continuing to aide in the development of Isles prospects, while maintaining our goal to win a Kelly Cup.”

“The 2017-18 season was a successful inaugural year for the entire organization, and our affiliation with the Islanders was an instrumental piece in that success. We can’t wait to continue our partnership with the Islanders over the next two seasons,” said Myers.

Founded in 1972, the New York Islanders Hockey Club is the proud winner of four Stanley Cup Championships. Keep up with breaking Islanders news on Twitter @NYIslandersPR. For more team information, log on to newyorkislanders.com.

The Railers 2018-19 home opener at the DCU Center is Saturday, October 20 vs. the Maine Mariners. The only way to secure your spot to opening night is by purchasing a season membership starting as low as $11.25 per ticket by contacting the Railers HC front office at 508-365-1750 or by visiting www.RailersHC.com.