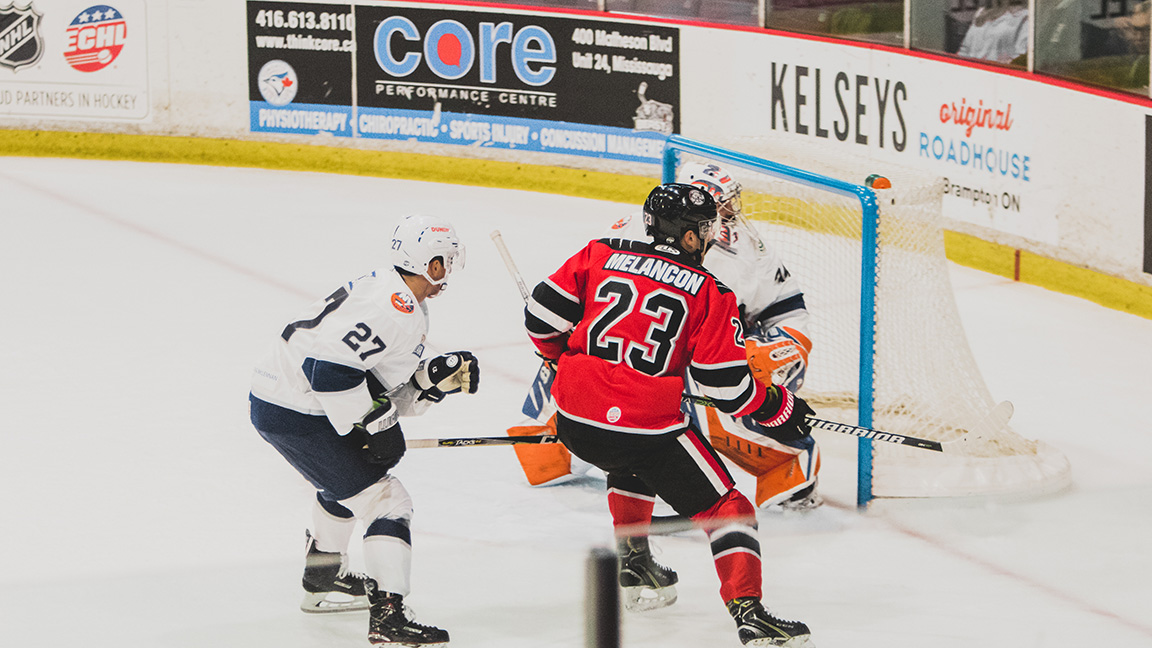 Meeting 1 of 8 vs. Brampton this season

Worcester Railers fall 5-2 in Brampton to the Beast

Jordan Samuels-Thomas (1-1-2) and Cody Payne scored power play goals for Worcester while the Railers finished the night two for six on the man advantage. Brenden Miller picked up the Gordie Howe hat trick for the Beast and Chris Clapperton finished with two goals and two assists while Joey Daccord made 27 saves in net for Brampton for the win. Evan Buitenhuis made 19 saves in the loss for Worcester while Cody Payne, Barry Almeida, and JD Dudek all extended their point streaks as Worcester fell to 1-2-0-0 on their four game road trip.

The Beast would score the only goal of the first period which came on a five on three power play courtesy of Chris Clapperton (2nd) who was able to sneak one past Evan Buitenhuis at 17:13. Worcester outshot Brampton 12-9 through the first frame as Evan Buitenhuis made eight saves on nine shots.

After a physical start to the second period Justin Murray (1stFM) recorded his first professional fight at 6:33 when he dropped the mitts with Brenden Miller (1stFM) and from there the sparks would fly as the teams combined four goals in 4:49 with Jordan Samuels-Thomas (2nd) going bar down on the power play at 14:02 tying the game at 1-1. Just 34 seconds later Chris Clapperton (3rd) notched his second goal of the gain giving Brampton a 2-1 advantage. The home team would increase their lead to 3-1 with a tally from Brenden Miller (1st) at 16:05 also making it a Gordie Howe hat trick for the Orangeville, ON native. Worcester headed back on the power play for the third time of the evening and a beautiful tic tac toe play would be finished off by Cody Payne (2nd) with Barry Almeida picking up the primary assist and Jordan Samuels-Thomas the secondary at 18:51. The Railers headed into the locker room down 3-2 after 40 minutes of play outshooting Brampton 21-18.

Brampton would score their second power play goal of the night thanks to Daniel Leavens (1st) at 12:33 of the third period making it a 4-2 Beast lead. The Railers had many good chances on their two power play chances in the third period but were unable to find the back of the net. The Beast tacked on an insurance goal from David Pacan (2nd) finding the back of the empty net with Evan Buitenhuis watching from the bench with just 22 seconds remaining in regulation.

Notes: Three Stars: 3rd star: Nic Pierog (0-0-0, 6 shots) 2nd star: Brenden Miller (1-1-2) 1st star: Colin Clapperton (2-2-4) …. final shots were 29-24 in favor of Worcester…Joey Daccord (2-2-0) made 27 saves on 29 shots for Brampton … Evan Buitenhuis (0-2-0) made 19 saves on 24 shots for Worcester while Linus Soderstrom served as the backup…. Worcester went 2-for-6 on the power play while Brampton went 2-for-6…. Cody Payne (2-2-4) extended his point streak to four games with a goal…. Barry Almeida (0-3-3) extended his point streak to two games with two assists….  JD Dudek (0-2-2) extended his point streak to two games with an assist…., Henrik Samuelsson (inj), Bo Brauer (inj), Ivan Chukarov (inj) Chris Rygus, and Matt Schmalz, did not dress for Worcester…. Mike Cornell picked up a game high 12 PIMS…. Worcester is now 7-6-1-2 all-time vs. the Beast and 2-3-0-2 at the CAA Centre. The Railers did not arrive in Brampton until 5am this morning after a seven-hour bus trip from Adirondack…. Big shout out to Equipment Manager Jeremy ‘Turtle’ Holloway and Athletic Trainer Nick Kieswether for unloading the equipment from the bus at the rink to allow the players to sleep at the hotel.

What’s on tap – Road Trip Coming to an End!