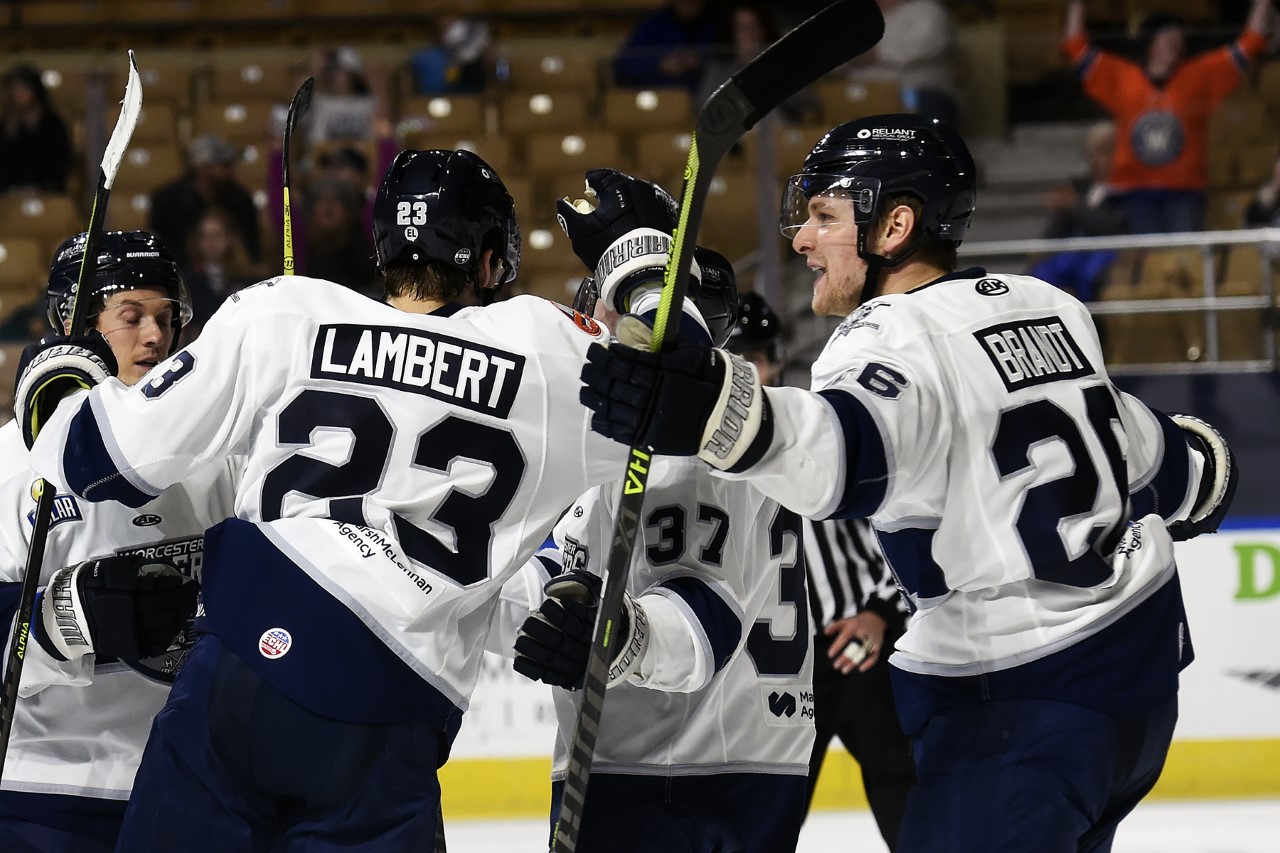 WORCESTER – They are both worth two points, but overtime victories seem a lot more satisfying than shootouts in the splendid world of professional hockey.

The Railers are 3-0 in OTs this season, one of the triumphs coming via a shootout, the other two via Collin Adams. He got his second overtime goal of the season Friday night in Worcester’s dramatic 3-2 victory over the Greenville Swamp Rabbits.

Adams also scored the winner in the Railers’ 4-3 win over Newfoundland on Nov. 2. That was on a mad rush down the left side. This time, Adams scored on a snapshot from the right circle after taking a pass from Blake Christensen. Adams put the puck over goalie Michael McNiven’s left shoulder.

“I think that the 3 on 3 should go on until somebody scores,” Worcester coach Jordan Smotherman said. “I think it’s a fun brand of hockey, it’s exciting, you hear the crowd getting into it. The shootout is one thing but the 3 on 3 is hockey.”

The overtime format works especially well for the Railers, a team built around speed. That was the key to Adams’ first OT goal, shooting the key Friday night.

“He likes to shoot,” Smotherman said. “He has a hard shot and he’s fast. We have a couple of guys we like having out there in that situation.”

The victory improved Worcester’s record to 11-2-0 and meant that the Railers have not lost consecutive games yet this season.

Jimmy Lambert and Blade Jenkins had the other Worcester goals. Adams’ came on an overtime power play, the teams skating 4 on 3, and snapped a streak of 13 straight power plays without a goal. The Railers had a huge advantage on power plays, getting five to Greenville’s one.

The Swamp Rabbits’ goals were sandwiched around Worcester’s two regulation goals. Nikita Pavlychev had one, Carter Souch the other. Souch scored on Greenville’s lone power play, beating Ken Appleby from the right circle at 14:58 of the third period.

For the second straight home game the Railers allowed the first goal, this one at 5:03 of the first period. Like Wednesday night, it was a bit ugly. Pavlychev got it, his eighth of the season, on a play that was reviewed.

Pavlychev cut in from the right side and got off a short shot that Appleby stopped initially. Pavlychev fell to the ice and his momentum carried him into Appleby and helped send the puck over the goal line.

Referee Marc-Olivier Phanuef took a long look at the video and eventually ruled the goal counted.

The Railers had chances to tie the score several times after that. They hit a post on a first period power play, then McNiven denied Zach Bross on a breakaway at 11:55 of the second period. Blake Christensen hit another post at 12:45 before Lambert finally made it 1-1 at 18:04.

He slammed a rebound past McNiven after he had stopped a shot by Jared Brandt. The goal ended a Railers scoreless drought of 54:56.

Jenkins’ goal went in off his skate at 2:18 of the third period, the puck taking a couple of zig-zags on the way past McNiven. The Swamp Rabbits pressed but the Railers protected their lead almost through the end regulation.

Then it was Adams time again.

MAKING TRACKS – Newcomer Jeff Solow got a lot of ice time on defense and played well, picking up an assist in his Worcester debut. … Adams had an assist of Jenkins goal and has 14 points in 13 games. … The goaltender matchup was unusual, although not unprecedented. Both goalies had played in the National Hockey League, Appleby for the Devils and McNiven for the Canadiens. This was McNiven’s fourth game against Worcester, first since he shut the Railers out, 2-0 on Nov. 2, 2019, while with Adirondack. … It was nice to see an original IceCat at the game, longtime former head of off-ice officials Norm Benoit. … Swamp Rabbits defenseman Justin Hamonic did not make the trip. Hamonic was a major part of the Railers success during their inagural season of 2017-18, playing in 69 of the team’s 72 games. … Coincidentally, Solow wore Number 22 for Worcester. That was Hamonic’s number for the Railers. Solow is the 11th Railer with 22 including five last season. … Conor Breen, Jack Quinlivan, Philip Beaulieu and Anthony Repaci were the Railers in street clothes.