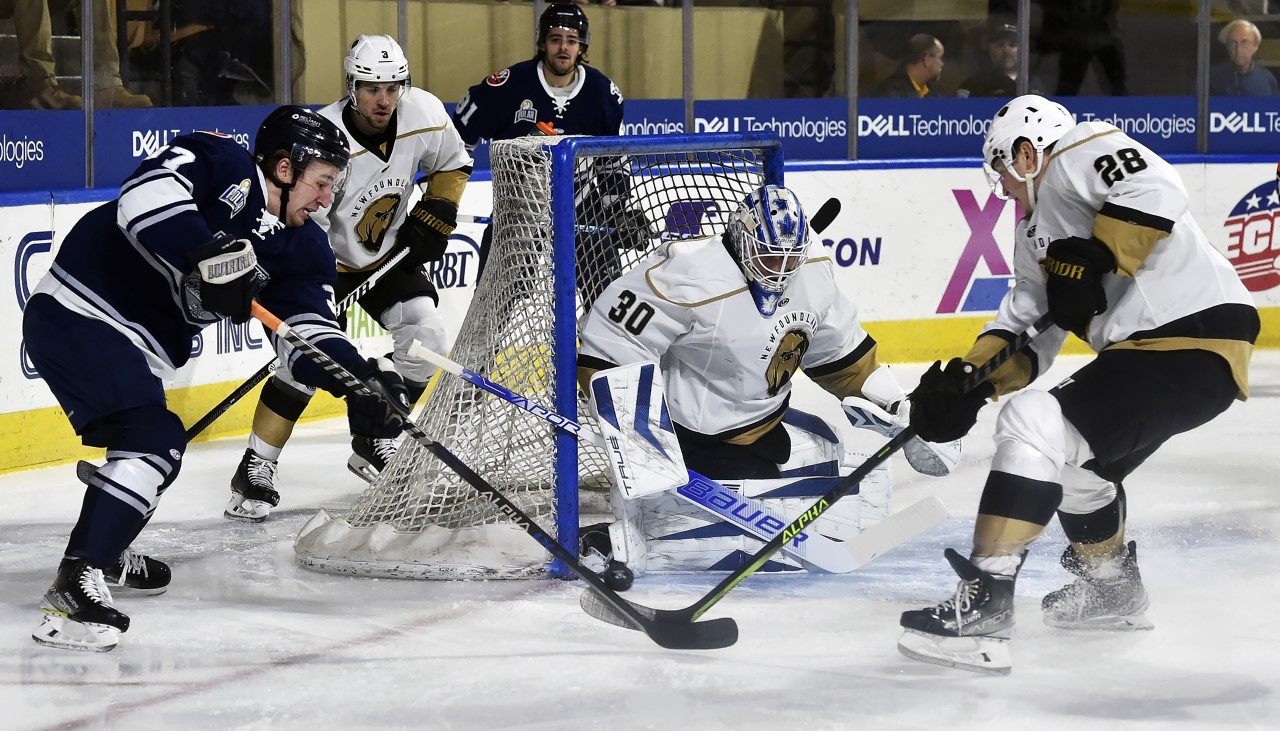 By Bill Ballou
WORCESTER – The Worcester Railers fell to the Newfoundland Growlers by a final score of 3-2 on Friday night.
Newfoundland controlled play for most of the evening, took a 3-0 lead, and kept Worcester bottled up to post a 3-2 victory. The visitors prevailed even though the Railers had gotten some roster reinforcements including goalie Ken Appleby and defenseman Trevor Cosgrove up from Bridgeport and Blake Christensen off injured reserve.
Worcester was able to close to within 3-2 on Bobby Butler’s goal with 1:21 left in the third period but the Growlers never let the Railers get a shot on goal in the closing seconds.
Brent Beaudoin had the other Railers goal. Keenan Suthers, Nolan Walker and Todd Skirving had the Newfoundland goals. Appleby played well in his first Railers appearance since Dec. 17, making 34 saves.
It was a one-goal defeat for Worcester, but all goals are not created equal. Walker scored at 19:32 of the first period, sending the Railers into the break down by two goals, not one.
“It was huge,” coach Jordan Smotherman said. “Any time you give up a goal late in a period it’s a killer, especially when it’s on the same mistakes we keep making.”
No Railers team has ever come back to earn a point after being down by three goals, let alone against a first-place team like Newfoundland. But Worcester tried mightily.
“The guys really had to battle hard to get back in the game and they did,” Smotherman added, “and I’m proud of that but at the same time we’ve got to stop shooting ourselves in the foot….all three goals were preventable.”
Suthers gave Newfoundland a 1-0 lead at 16:17 of the first period. He corralled the rebound of a shot by defenseman Brennan Kapcheck and beat Appleby from in close. The crease became the Land of the Giants with Suthers, 6-foot-8, scoring on Appleby, 6-foot-5.
Worcester then surrendered that disheartening goal late in the period. Pavel Gogolev, who tormented the Railers in Newfoundland, went behind the net and set up Walker for a shot which found the back of the net. Gogolev, a third-year pro, has 56 points in 35 ECHL career games.
The Railers had a couple of good chances in the period, both short breakaways turned aside by Dryden McKay. Zack Bross’ backhander was stopped at 13:16, then Myles McGurty tried a similar move and was denied at 15:35.
Worcester failed to capitalize on a 2-on-1 in the first minute of the second period, then Christensen just missed from in close at 1:55. The Growlers responded at 2:46 as Skirving was set up all alone between the circles and zipped home a wrist shot.
Beaudoin got the Railers on the scoreboard at 16:39 after some sustained pressure in front of McKay. He slid a 10-footer home for his 11th goal of the season. With Appleby on the bench, Butler was set up nicely by Newkirk and scored his 14th of the season.
MAKING TRACKS – Butler’s goal was his 20th in a Railers uniform. … The Railers continue their play within the division when they take on the Maine Mariners at 7:05 Saturday night. Maine has earned 19 points in its last 10 games. … Attendance was 2,623. … Butler scored Worcester’s fourth extra-attacker goal of the season. Three of them have come with two-goal deficits. … One game after McGurty played his 100th game in a Railers uniform, Beaudoin did the same. They are two of just nine players with 100-plus games for the Railers. … Worcester has two players on injured reserve. Jack Quinlivan missed his 25th game and Philip Beaulieu his 10th. … The league assigned two referees for the game, one of them a DCU Center first-timer. That was Yannick Jobin-Manseau, who was joined by John Lindner. … Cosgrove was assigned Number 10, setting a Railers record for most different numbers in a season with three. He has also had 20 and 44. … Zach O’Brien, the ECHL’s leading scorer with 56 points, was in the building but did not dress. … The Railers released Derek Osik and Jake Schultz.
#AllAboutTheW
https://railershc.com/wp-content/uploads/2023/01/Newkirk2.jpeg 731 1280 admin /_media/2021-22/logo.png admin2023-01-20 22:24:252023-01-20 22:24:25Worcester Opens Three-in-Three With 3-2 Loss to Growlers