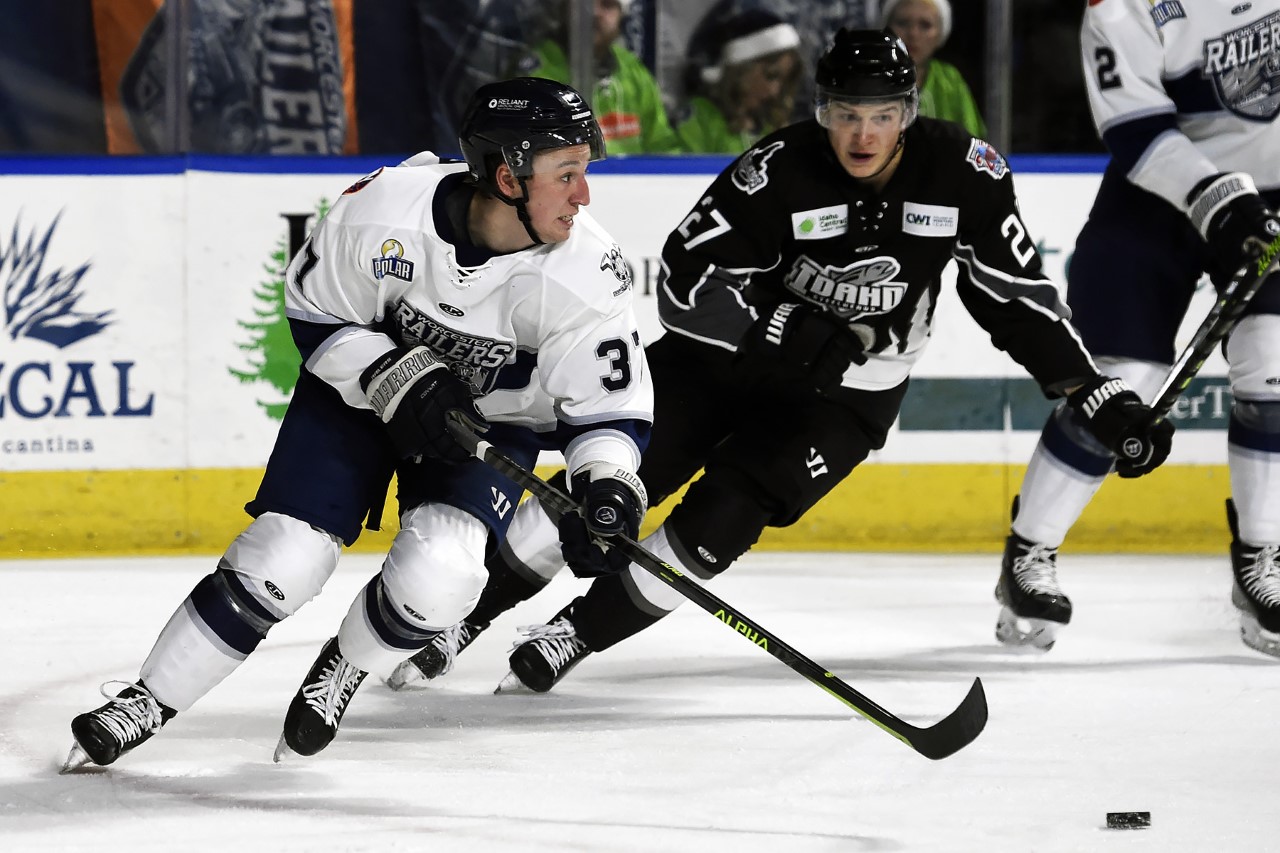 WORCESTER – The Worcester Railers fell to the Idaho Steelheads by a final score of 5-1 on Friday night at the DCU Center.

The Steelheads outshot the Railers on the night, finishing with a 48-23 edge in shots on goal. Reece Newkirk prevented the shutout by beating Idaho goaltender Adam Scheel in the second period. The Steelheads got two goals from A.J. White and single ones from Wade Murphy, Owen Headrick, and Colten Kehler.

And, yes, Murphy’s name sounds familiar. He scored the first goal in Railers history on Oct. 14, 2017, in their 4-3 Opening Night triumph over Manchester here. Friday night, Murphy had two assists as well as a goal and was a remarkable plus-5.

The Railers began the homestand with a roster bolstered by the return of Blade Jenkins, returned to Worcester by Bridgeport of the AHL. Ryan MacKinnon, Trevor Cosgrove, Jimmy Lambert, and Collins Adams remain with the Islanders while Jacob Hayhurst and Steve Jandric are with Springfield.

Jandric is eight games into a 25-game pro tryout with the Thunderbirds.

This marked Idaho’s first visit to the DCU Center. The Steelheads, based in Boise, are the 24th different ECHL team to play a game in Worcester. That number of opponents represents 15 different states and three Canadian provinces.

White arrived in town with two goals in 18 games. Friday night he had two in the first seven minutes or so. His first goal was at 1:32 and was unassisted. White carried down the left wing as part of a 2-on-1 and never relinquished the pack. White put it past Ken Appleby from the bottom of the left circle. Idaho’s next goal was at 7:02 to make it 2-0. This time White popped in a rebound from just outside the crease.

Appleby shut the door after that, though, to keep the game within reach at 2-0 after 20 minutes. The Steelheads outshot Worcester, 19-5, in that stretch.

The Railers’ best chance of the period was Anthony Repaci’s shorthanded breakaway at 19:05 which Scheel stopped. Jared Brandt was in the box to start the second period and once again Worcester made a shorthanded bid with Jenkins being denied at 1:10.

Newkirk finally got the home team on the scoreboard at 11:20, beating Scheel under the pads from the right circle. The goal, the 20th of Newkirk’s Railers career, was set up by passes from Jenkins and Quin Ryan.

It was a winnable game for the Railers heading into the final 20 minutes. It had a next-goal-wins feeling, but the Steelheads got the next goal as Murphy scored from in close at 3:19. It was all Idaho after that as Headrick made it 4-1 at 15:00 and Kehler closed out the scoring at 18:05.

MAKING TRACKS – Cam McGuire joined Murphy in a return to the DCU Center. McGuire spent almost three years with the Railers most visibly as a broadcaster and was behind the mike for Idaho Friday night. …The Steelheads are here again Saturday night and Sunday afternoon then fly back to the Gem State. … Forward Billy Jerry made his DCU debut in a Railers uniform, but not his overall DCU debut. Jerry was in the lineup for Adirondack on opening night in October. … Quin Ryan and Brent Beaudoin are among several players tied for the league lead in fewest penalty minutes with zero, not including short-timers. Beaudoin has played in 21 games, Ryan 20. Beaudoin has just 4 PIM in 84 career games and has gone 24 games since his last visit to the penalty box last April 10 in Adirondack. … The Railers and Steelheads played three times in Idaho last season. Saturday’s outcome left the all-time series tied at 2-2-0 when the visiting team having won three of the four games.