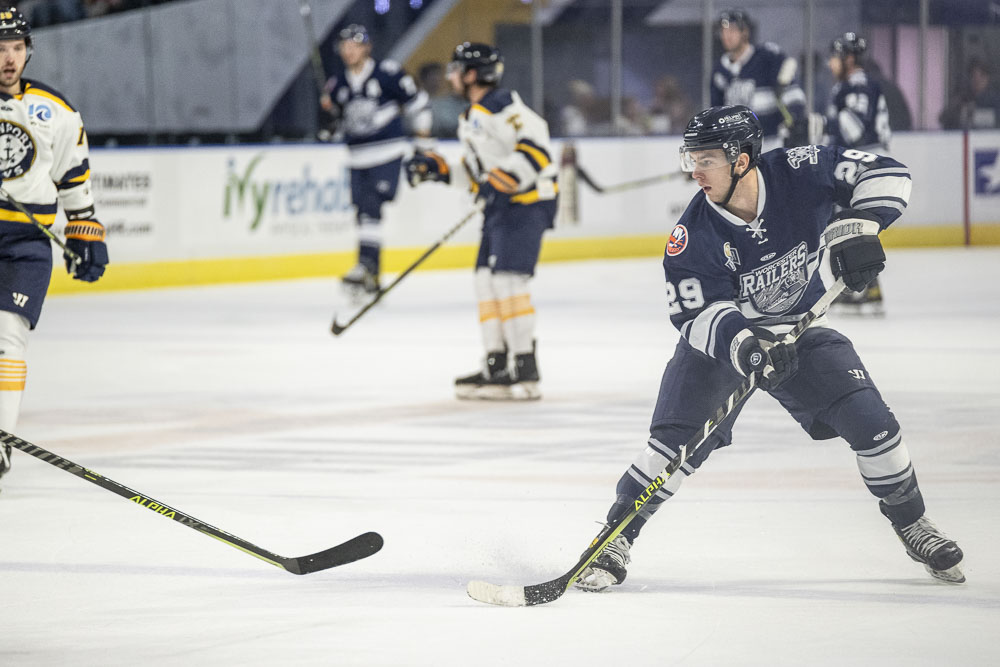 Meeting 5 of 8 vs. Norfolk this season

Quin Ryan (2-0-2) slipped one underneath the glove hand of Michael Bullion for the Railers midway through to first to put Worcester out in front 1-0. Norfolk scored the following three goals, as Tag Bertuzzi (1-0-1) in the first, and Griffin Lunn (1-0-1) and Eric Williams (1-1-2) in the second all scored to give Norfolk a 3-1 lead late in the second period. Early in the third, Ryan scored his second of the night to make it 3-2 Admirals before Danny Katic (1-1-2) gave Norfolk their two-goal lead back 7:40 into the third. Blake Christensen (1-0-1) scored in his second straight game and made it a one-goal game, followed by Jimmy Lambert (1-0-1), who deflected a puck out in front and tied the game 4-4 heading into overtime. In overtime, Cody Milan (1-1-2) was the difference maker, as he one-timed a feed from Ryan Foss and beat Ken Appleby in net for the Railers and snapped their 12-game losing streak to beat the Railers 5-4.

Quin Ryan (5th) scored the game’s first goal on a rush down the left side where he perfectly placed a puck underneath the glove side of Miachel Bullion and opened the scoring at 1-0 Worcester. Worcester was all set to take a 1-0 lead into the intermission before Tag Bertuzzi (4th) was left alone out in front with 32 seconds left in the frame. Brett Ouderkirk placed a puck right onto the tape of Bertuzzi who was the only player in front of Ken Appleby. Bertuzzi tapped it five-hole past a sprawling Appleby to make it 1-1 going into the first intermission. Worcester outshot Norfolk 11-7 in the first.

Norfolk scored the next two goals unanswered, as Garrett Lunn (2nd) and Eric Williams (2nd) found the back of the net and made it 3-1 Norfolk. First, it was Lunn from Liam MacDougall who was able to beat Appleby and put Norfolk ahead for the first time on the night, 2-1. Williams then unleashed a drive from the point through traffic that found its way top shelf and extended the Norfolk lead to 3-1 entering the third. Shots in the second period were even 9-9, while the Railers were still outshooting the Admirals 20-16.

It didn’t take long for Quin Ryan (6th) to score his second of the game early in the third period. Ryan was left out alone in the neutral zone and was found by Christian Evers all the way down the ice. The pass left Ryan in on Boullion alone, who he then beat to put Worcester back within one at 3-2. Norfolk’s Danny Katic (2nd) got it right back just six minutes later to put Worcester back at a two-goal deficit. Worcester had life yet, as both Blake Christensen (3rd) & Jimmy Lambert (6th) scored to give Worcester a chance in OT. Christensen raced down the left side and cut into the slot, drawing Boullion to the far post. Christensen then shot the puck top-shelf glove-side on Boullion and made it 4-3 Admirals. Jimmy Lambert with just 1:38 remaining in the third period then deflected a shot from Phil Beaulieu at the point and beat Boullion to tie the game at 4-4 at the end of regulation. Worcester outshot Norfolk 12-9 in the third, and 32-25 through regulation.

Worcester started the overtime period maintaining most of the offensive zone time and managed to record one shot on Boullion. The Admirals then came back down ice and set up in the attacking end. Ryan Foss found Cody Milan (3rd) alone in the slot for a one-timer, giving Norfolk their first win since October 28th. Shots in overtime were tied 1-1, as Worcester outshot Norfolk for the game 33-26.