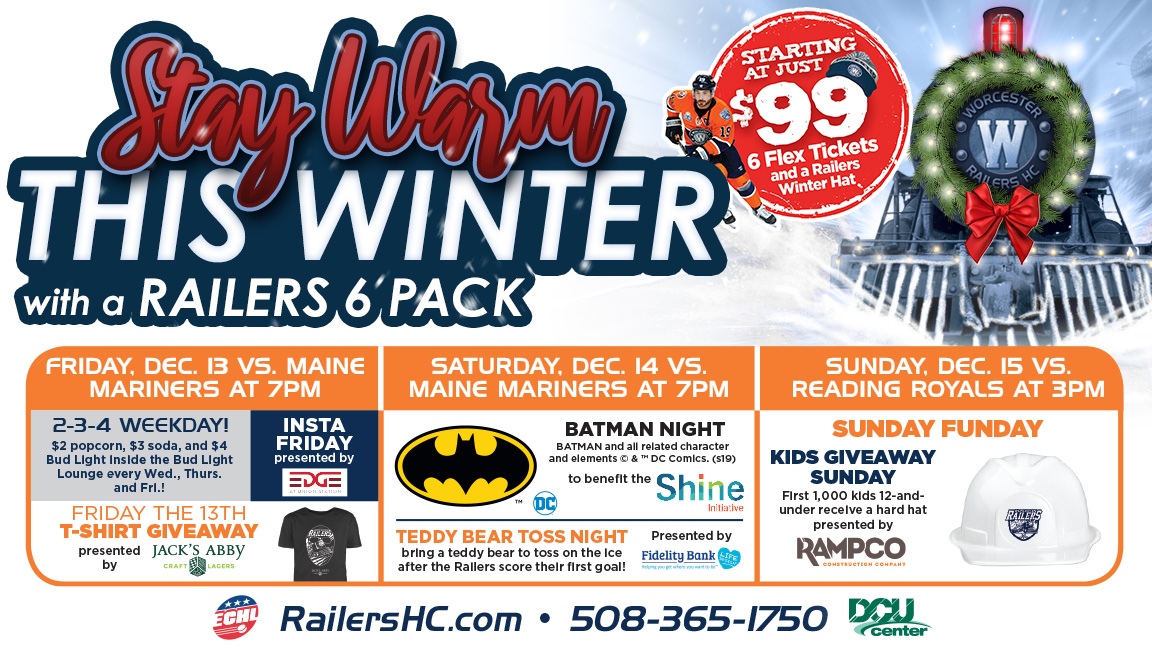 The Railers return home on Friday, Dec 13 to kick-off a four-game pre-holiday homestand!

6 ticket vouchers and a Railers winter hat starting at just $99!

On Friday, Dec 13 the Railers host the Maine Mariners at 7pm on a 2-3-4 Friday!  Score $2 popcorn, $3 soda, and $4 Bud Light in the Bud Light Lounge!  The first 1,000 fans will receive a Worcester Railers Friday the 13tht-shirt courtesy of Jack’s Abby! It is also another Instagram Friday presented by the EDGE at Union Station where one lucky fan will win $100 in Railers merchandise!

On Saturday, Dec 14 the Railers host the Maine Mariners at 7pm on a BIG GAME SATURDAY on BATMAN Night to benefit the Shine Initiative with a Teddy Bear Toss presented by Fidelity Bank!  The Railers will wear a special BATMAN themed jersey which will be auctioned off throughout the game to benefit the Shine Initiative. Fans are encouraged to bring a new teddy bear to the game which can then be thrown onto the ice after the Railers score their first goal.  The teddy bears will be collected and donated to local charities just in time for the holiday season. Saturday Night Signings will feature a Railers player(s) signing autographs during the first intermission in the Fallon Health Pavilion.

On Wednesday, Dec 18 the Railers host the Allen Americans at 7pm on a 2-3-4 Weekday.  Score $2 popcorn, $3 soda, and $4 Bud Light in the Bud Light Lounge! Show your Price Chopper Market 32 Advantedge Card at the Box Office for a $5 discount on all tickets purchased.

Listen to all Railers games live on 98.9 Nash ICONwith coverage beginning 30 minutes before puck drop withEric Lindquist and Cam McGuire.  Watch all games online for a small fee at www.ECHLTV.com.  Full season memberships, mini plans, and group tickets are on sale now by calling the Railers front office at 508-365-1750 or by visiting www.RailersHC.com.

Railers Lose 4-2 in First Ever Meeting With Indy Fuel