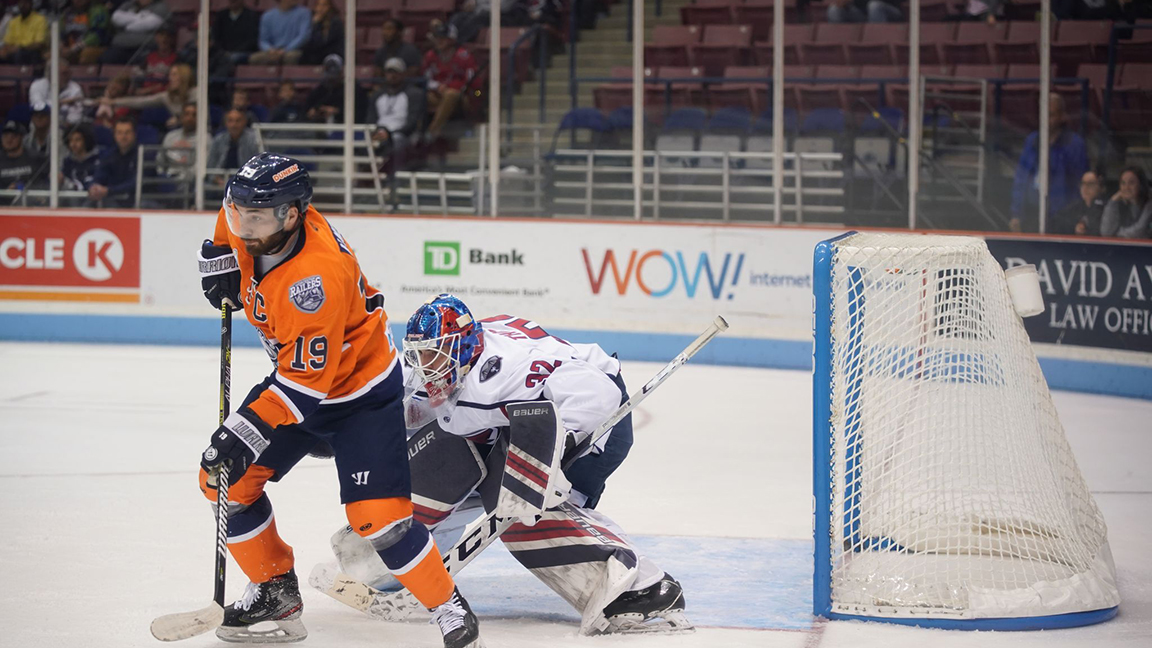 Meeting 1 of 2 vs. South Carolina this season

Charleston, SC – The Worcester Railers HC (18-33-4-0, 40pts) wrapped up their five game road trip with a heartbreaking 6-5 overtime loss to the South Carolina Stingrays (41-10-3-1, 86pts) in front of 3,580 fans at the North Charleston Coliseum on Sunday afternoon.The Railers return home for a three in three weekend at the DCU Center which begins on Friday, February 28 at 7pm.

The first period was nothing short of exciting as Ian Milosz made a handful of big saves before Barry Almeida (15th) gave Worcester a 1-0 lead at 6:54. The lead did not last long as fellow Boston College Eagle Steven Whitney (1st) tied the score at 1-1 at 7:32. Eight seconds later Tyler Poulsen (11th) notched his first as a Railer on a fluky bounce as the Railers took a 2-1 advantage. The 2-1 lead held for Worcester through 20 minutes of play with the Railers outshooting the Stingrays 12-9.

It took just 91 seconds into the second period for Steven Whitney (2nd) to notch his second goal of the game after he banked one off of Ian Milosz from behind the net to tie the score at 2-2. Former Railer Alec March (3rd) sent a blast off from the high slot that rose over the right shoulder of Milosz at 8:35 to give South Carolina a 3-2 lead, their first of the game. The Railers leading goal scorer Nic Pierog (22nd) would deflect a puck past Logan Thompson in front of the cage at 9:55 off an initial shot point shot from Justin Murray to even the game up at 3-3. On the Railers first power-play of the afternoon Ross Olsson (11th) would corral the puck behind the net and on the top of the post was able to fire it by Thompson to make it a 4-3 Railers lead. Worcester led 4-3 after 40 minutes of play and led in shots 25-23 through the first two stanzas.

Cameron Askew (9th) tied things up at 4-4 for South Carolina at 15:09 and then the Stingrays would take a 5-4 lead when Steven Whitney (3rd) capped off his hat trick with just 2:11. In the dying moments of regulation Cody Payne (6th) would slam home a lose rebound to tie the game at 5-5.

The two teams headed to overtime and the hero of the day would be Jesse Lees (1st) was able to end the game at 5:30 of the extra frame to give South Carolina a 5-4 victory.

Notes: Three Stars: 3rd star: Cameron Askew (1-1-2) 2nd star: Jesse Lees (1-0-1) 1st star: Steven Whitney (3-0-3)…. final shots were 46-37 in favor of Worcester …. Logan Thompson (21-7-1) made 41 saves on 46 shots for South Carolina…. Ian Milosz (3-5-0) made 30 saves on 36 shots for Worcester while Jakub Skarek served as the backup…. Worcester went 1-for-4 on the power play while South Carolina went 0-for-2…., JD Dudek (IR), Kyle Thomas (IR), Yanick Turcotte (IR), Tanner Pond (IR), Dylan Sadowy (IR), Arnaud Durandeau (INJ), Ben Thomson (INJ), Evan Buitenhuis (INJ), Jack Macnee, and Ivan Chukarov, did not dress for Worcester…. Mike Cornell and Linus Soderstrom are all with the Bridgeport Sound Tigers…. Justin Murray has now played in 45 straight games Worcester has 17 games left on the regular season…. Nic Pierog led all skaters with 11 shots and now has 203 on the season which is second in the league…. Ross Olsson had a goal and a personal high 11 shots…. Cody Payne snapped a 23 game goalless drought dating all the way back to November 26th…. Barry Almeida now leads all Railers players with five first goals…. Worcester snapped a 0-for-42 streak on the power-play which lasted twelve games without a man advantage tally…. The Railers are now 0-4-0-0 all-time vs. the Stingrays and 0-2-0-0 at the North Charleston Coliseum.