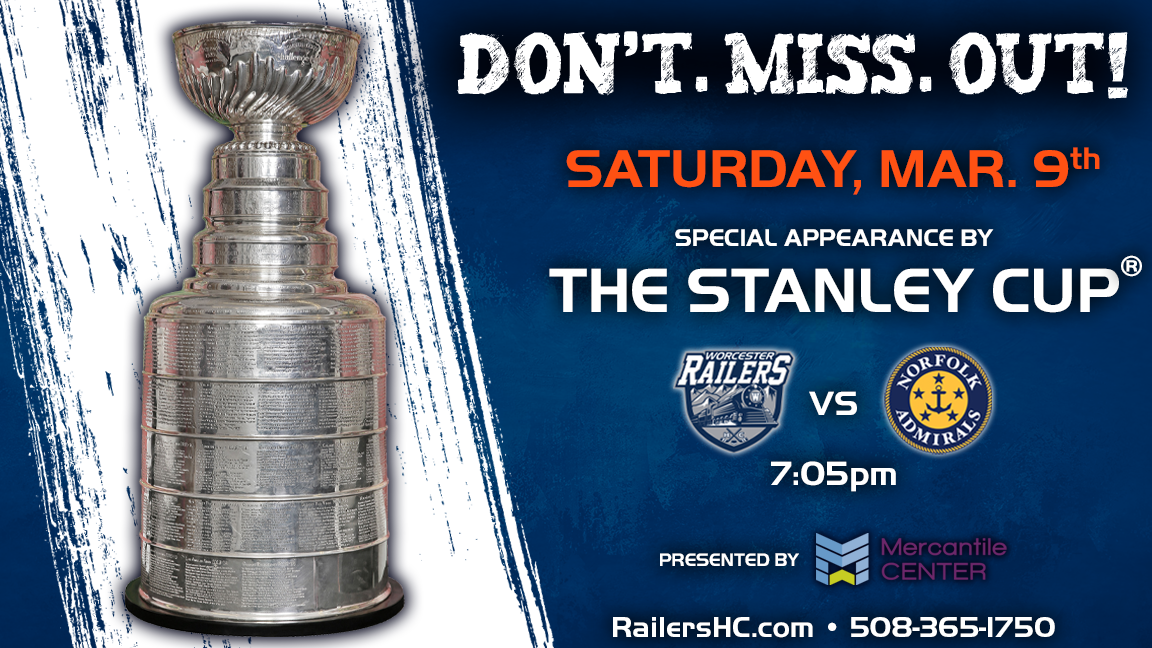 Railers fans can take their picture with the Stanley Cup from 6-8:30pm on the DCU Center concourse

Worcester, MA– The Worcester Railers Hockey Club (@RailersHC), proud ECHL (@ECHL) affiliate of the New York Islanders® (@NYIslanders), announced today that the Stanley Cup® will appear at the Worcester Railers game at the DCU Center on March 9 at 7pm presented by Mercantile Center.

On Saturday, March 9 the Railers host the Norfolk Admirals at 7pm on a BIG GAME SATURDAY! The Stanley Cup® will appear from 6-8:30pm in the DCU Center concourse presented by Mercantile Center.   Fans will have an opportunity to take their photo with the Stanley Cup during the game.  The Railers will be wearing a special Nickelodeon themed jersey presented by the Workers Credit Union. Every Saturday night home game is SATURDAY NIGHT SIGNINGS presented by MidState Auto Group with a Railers player signing autographs during the first intermission.

Individual tickets to the Railers game start as low as $15 by calling 508-365-1750 or visit RailersHC.com.  Save $$$ with a RAILERS 6 PACK which includes six flex tickets and a Railers winter hat starting at $99.

The Railers Tavernlocated behind the DCU Center provides hockey fans with a great pregame and postgame atmosphere all season long. Watch all road games broadcast live at Nonna’s (FRI, SAT, SUN) or Railers Tavern (MON-THU) or watch on ECHLTV.com for a small fee. Listen to all Railers games live on 98.9 Nash ICON with coverage beginning 30 minutes before puck drop with Eric Lindquist and Tom Matthews. Full season memberships, mini plans, and group tickets are on sale now by calling the Railers front office at 508-365-1750 or by visiting www.RailersHC.com.  For information on the 1stAnnual Worcester WinterFest, please call 617-439-7700.

Railers go PINK in a 3-in-3 home weekend in February!

Railers kick-off second half of season with gritty 4-2 road win in Adironda...
Scroll to top