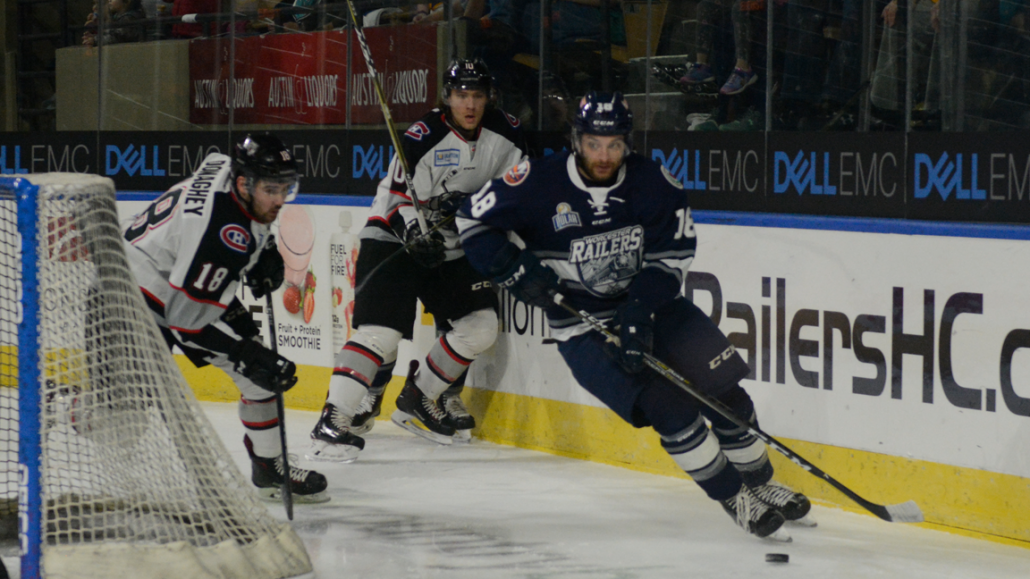 Meeting 6 of 7 vs. the Beast this season

Worcester, MA – The Worcester Railers HC (33-26-4-4, 74pts) picked up their sixth straight win on home ice after a 3-2 victory over the visiting Brampton Beast (26-32-6-4, 62pts) in front of 4,727 fans at the DCU Center on Friday evening.   The Railers close out their three game homestand on a BIG GAME SATURDAY at 7pm vs. the Brampton Beast on Youth Hockey Night with a special appearance by Rene Rancourt.

TJ Syner, Mike Cornell, and Frankie DiChiara found the back of the net for Worcester while Mitch Gillam made 30 saves in his 10th straight start in net for his 20th win of the season as the Railers are now one point behind the Wheeling Nailers for the final playoff spot in the North Division – the Railers have two games in hand with five games left.   The Railers charged out to a 3-0 lead before holding on in the final minutes for the one goal victory.

Despite being shorthanded three times in the opening period, Worcester would score the only goal on their first shot as TJ Syner (8th) fired a shot from 40 feet that broke through goaltender Chris Driedger at 3:03.  Worcester was outshot 8-5 in the opening 20 minutes but held a 1-0 lead.

Frankie DiChiara (7th) banged home a Dylan Willick rebound at 2:05 of the third period to put Worcester ahead 3-0.  Brampton would then pour on the pressure and get within a goal after Jordan Henry (9th) struck at 7:52 and Alex Foster (14th) at 11:49 managed the score to 3-2.  Mitch Gillam would then have to make some big saves and the Railers penalty kill made a big stop in the final two minutes as Worcester held on for the 3-2 home victory.

Notes: Three Stars: 3rd star: TJ Syner (Goal) 2nd star: Ben Masella (0-2-2) 1st star: Frankie DiChiara (GWG) …Final shots were 28-32 in favor of Brampton…Chris Driedger (7-5-1) made 25 saves on 28 shots for Brampton… Andrew D’Agostini was the backup for the Beast…. Mitch Gillam (20-14-2) made 30 saves on 32 shots in his 18th start in the last 19 games for Worcester and his 10th straight start overall… Will King was the backup goaltender for the Railers…. Worcester went 1-for-5 on the power play while Brampton went 0-for-5…Josh Monk (inj), Chris Langkow (inj), Tommy Kelley (inj), Connor Doherty, Josh McArdle, and Maurizio Colella did not dress for Worcester…. Kellen Jones, Eamon McAdam, Yanick Turcotte, Jeff Kubiak and Kyle Schempp are currently on recall with the Bridgeport Sound Tigers…. forward Dylan Willick made his pro debut for the Railers and picked up an assist…the Railers are now 14-2-1 in their last 17 games at the DCU Center… Worcester is now 20-12-2-0 on home ice this season…. the Railers are in the middle of a stretch where they play four games in five days and seven games in 12 days to close out the season.