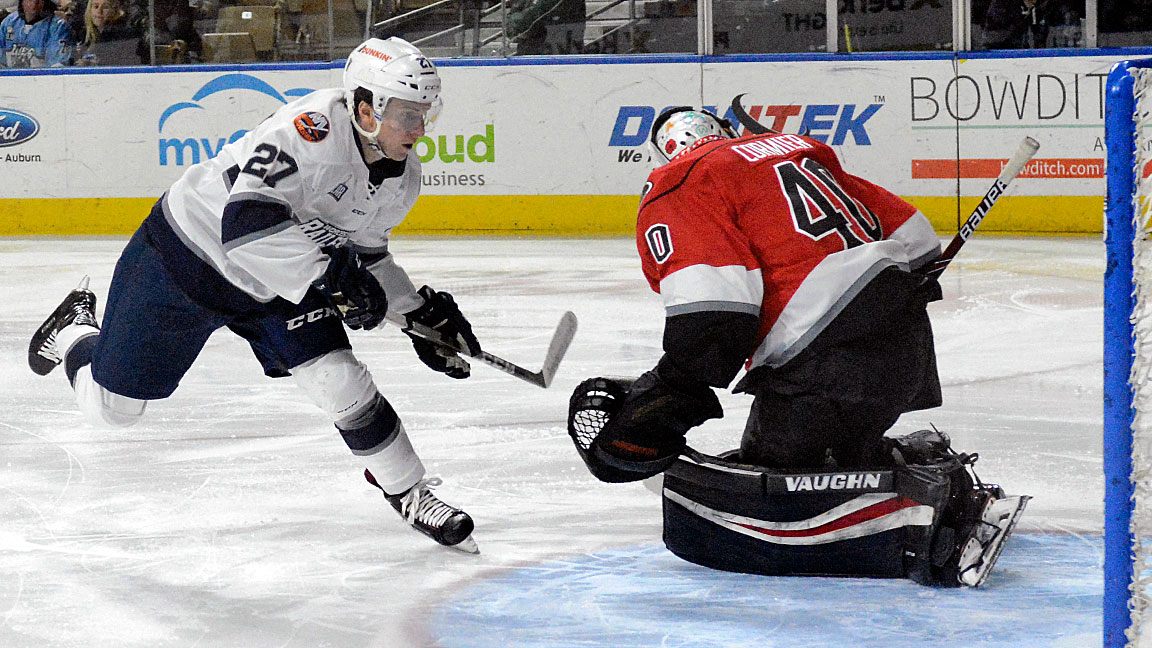 Meeting 10 of 11 vs. Adirondack this season

Glens Falls, NY – The Worcester Railers HC (27-22-5-4, 63pts)extended their point streak to five games (4-0-1-0) after an exciting 3-2 shootout win over the host Adirondack Thunder (31-21-5-3, 69pts) in front of 3,317 fans at the Cool Insuring Arena anon Friday evening. With the win, the Railers are now one point behind the Manchester Monarchs and Brampton Beast for the 4th spot in the North Division. The Railers return home to host the Norfolk Admirals at 7pm with a special appearance by the Stanley Cup presented by Mercantile Center.

Nick Sorkin and Ryan Hitchcock scored for Worcester while Evan Buitenhuis made 41 saves in net for his 10th win of the season before Bo Brauer scored in the 7th round of the shootout for the winner. Logan Thompson made 25 saves in net for the Thunder as the Railers improved to five games over .500 for the first time this season. It was the fifth straight win for Worcester over Adirondack overall and now 6-4-0-0 vs. their North Division rivals.

It was a physical first period of play that saw the two captains throw knuckles at 7:58 with Mike Cornell landing a series of right hands on James Henry to set the tone early on.  Worcester would connect on their second power play after a Barry Almeida shot from the left wall was kicked out by netminder Logan Thompson and went right to Nick Sorkin (14th) in the left slot for a rebound score at 16:48. Shots were 9-8 in favor of Adirondack through 20 minutes of play.

Ryan Hitchcock (13th) extended his point streak to five games with a wicked shot from in between the circles at 4:26 of the second period assisted by Tyler Barnes and Barry Almeida to give the Railers a 2-0 lead.  Matt Salhany (14th) got the Thunder on the board as he got around the Worcester defense and ripped a shot top shelf from in tight on Evan Buitenhuis at 14:10.  Shots were 23-20 in favor of Adirondack through 40 minutes of play.

Shane Conacher (9th) tied the score with the extra attacker at 18:37 to send the crowd into a frenzy as the Thunder outshot Worcester 17-4 in the third period.  Both teams had three shots in overtime before the game headed to the shootout.

Tommy Kelley and Barry Almeida scored for Worcester in the first six rounds before Bo Brauer won the game in the 7th round of the shootout to give Worcester the 3-2 road shootout victory.

Notes: Three Stars: 3rd star: Ryan Hitchcock (1-0-1) 2nd star: Bo Brauer (GWG in SO) 1st star: Shane Conacher (1-0-1, Shootout goal) …. final shots were 43-28 in favor of Adirondack….Logan Thompson (1-2-1) made 25 saves on 297shots for Adirondack and stopped four of seven in the shootout…. Evan Buitenhuis (10-9-4) made 41 saves on 43 shots for Worcester and stopped five of seven in the shootout….while Blake Wojtala served as the backup…. Worcester went 1-for-2 on the power play while Adirondack went 0-for-1…. Kyle McKenzie (inj), Matt Schmalz (inj), Tommy Panico (inj), Alex Vanier (inj), Ivan Chukarov, and Ross Olsson did not dress for Worcester…. Goaltender Mitch Gillam was recalled by the Bridgeport Sound Tigers on Thursday and made his AHL debut tonight in relief of Jeremy Smith in the second period in Rochester…. Barry Almeida added two assists for Worcester…. the Railers are now 13-14-1-3 on the road this season – it was the 9throad game in last 10 games overall for the Railers….Ryan Hitchcock now has 27 points (12-15-27) in his last 21 games and is on a five game point streak (3-4-7)….Nick Sorkin (4-3-7) has a six-game point streak… the Railers have 14 games remaining (9 home, 5 road)… it is the first time the Railers have been five games over .500 this season….Josh Holmstrom finished with five shots… the Railers finished a stretch where they played nine of their last 10 games on the road – finished with a 6-2-2 record….

On Saturday, March 9 the Railers host the Norfolk Admirals at 7pm on a BIG GAME SATURDAY! The Stanley Cup® will appear from 6-8:30pm in the DCU Center concourse presented by Mercantile Center.   Fans will have an opportunity to take their photo with the Stanley Cup during the game.  The Railers will be a wearing a special Nickelodeon themed Ninja Turtles jersey presented by the Worcester Credit Union. Every Saturday night home game is SATURDAY NIGHT SIGNINGS presented by MidState Auto Group with a Railers player signing autographs during the first intermission.

On Sunday, March 10 the Railers host the South Carolina Stingrays at 3pm on STAR WARS DAY on a KIDS GIVEAWAY SUNDAY!  Meet Star Wars characters and the first 1,000 kids 12-and-under will receive a light sword keychain courtesy of Advantage Truck Group! Score a SUNDAY FUNDAY ticket pack every Sunday which includes 4 ticket and 4 beers or 4 tickets and 4 sodas/popcorns starting at just $60!

Individual tickets to the Railers game start as low as $15 by calling 508-365-1750or visit RailersHC.com.  Save $$$ with a RAILERS 6 PACK which includes six flex tickets and a Railers winter hat starting at $99.