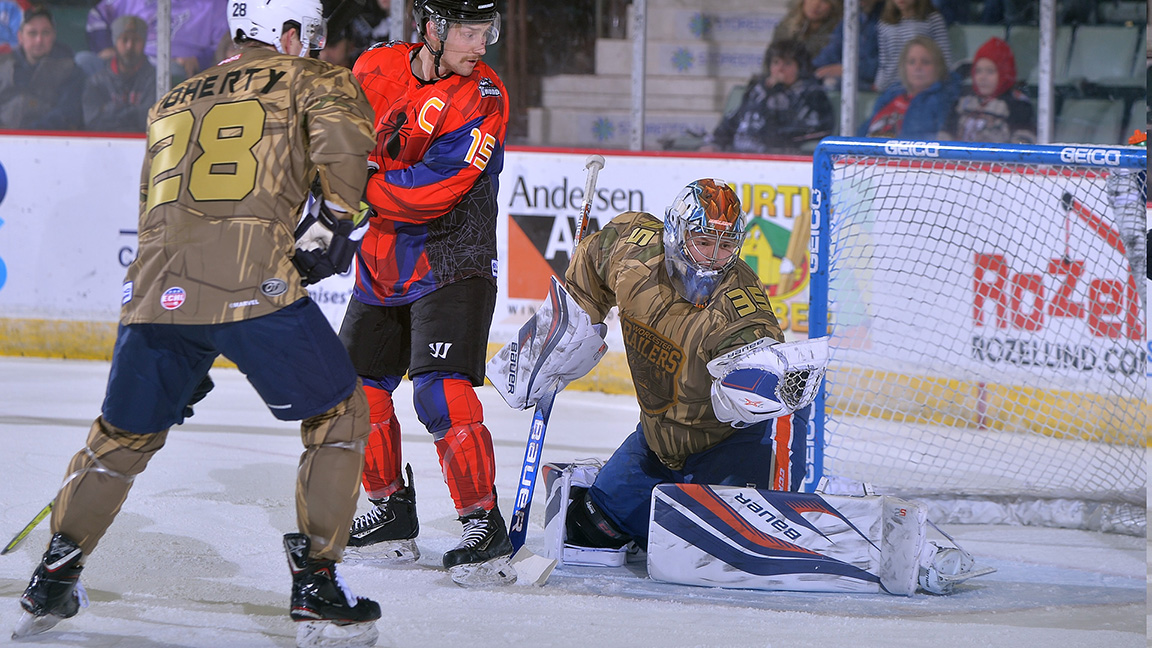 Meeting 6 of 14 vs. Adirondack this season

Railers up ended 6-2 vs. the Adirondack Thunder on Marvel Night

Cody Payne and Matt Schmalz scored goals for the Railers as Worcester was defeated by the Adirondack 6-2. Linus Soderstrom made 39 saves in the loss while Adirondack got goals from Ara Nazarian (2), Alex Carrier, Mike Szmatula, Matt Salhany, Connor Riley. Evan Cormier made 32 saves in his first win of the season for the Thunder and was named number one star.

Adirondack got on the board just 3:49 into the first period as Ara Nazarian (2nd) collected a pass in the right circle and sent a backhand shot by Linus Soderstrom to take a 1-0 lead. Alex Carrier (1st) gave the Thunder a 2-0 advantage beating Linus Soderstrom through the five-hole at 6:30. Adirondack outshot Worcester 18-8.

In the second period Cody Payne (3rd) answered for Worcester at 11:14 throwing one towards the net from behind the goal line which hit off an Adirondack players skate and past Evan Cormier cutting the deficit to 2-1. The Thunder responded with a goal of their own just 1:34 later on a rebound finished off by Mike Szmatula (3rd). The Thunder held a slight edge in shots in the middle frame 15-14, and 33-22 through the first 40 minutes of play.

Matt Salhany (2nd) redirected a shot from the point to give the Thunder a 4-1 lead at 7:28 of the third period. Just 27 seconds later Worcester was able to answer as Matt Schmalz (2nd) received a beautiful feed from Jordan Samuels-Thomas making it a two-goal game with 12:05 to play. The Thunder added two more goals, one an empty netter from Connor Riley (2nd), and an even strength score from Ara Nazarian (3rd), in the final two minutes of the third period to defeat Worcester 6-2.

Notes: Three Stars: 3rd star…. Jake Linhart (0-4-4, +5) 2nd star: Ara Nazarian (2-0-2, +2, 6 shots) 1st star: Evan Cormier (32 saves, Win) final shots were 45-34 in favor of Adirondack…. Evan Cormier (1-1-0) made 32 saves on 34 shots for Adirondack.… Linus Soderstrom (1-3-0) made 39 saves on 44 shots for Worcester while Evan Buitenhuis served as the backup…. Worcester went 0-for-3 on the power play while Adirondack went 0-for-4…. Ivan Chukarov (inj), Tanner Pond (inj), Justin Murray and Chris Rygus did not dress for Worcester…. Shane Walsh led the Railers with seven shots…. Yanick Turcotte received a misconduct in the third period and a game high 14 penalty minutes…. Jack Stander made his Railers debut finishing minus two….Mike Cornell, Nic Pierog, and Jakub Skarek are currently on recall with the Bridgeport Sound Tigers…. Worcester is now 18-9-2-0 all-time vs. the Thunder and 11-5-1-0 at the Cool Insuring Arena.

The Railers will host the Reading Royals on Wednesday, Nov 13 at 10am for the annual School Day Game in partnership with the Worcester Telegram & Gazette Newspapers in Education program. Doors open at 9am with over 4,500 children from the Worcester public school system expected to attend.

On Thursday, Nov 14 the Railers host the Brampton Beast at 7pm on College Night!  All college students can score $10 tickets at the Box Office with a college ID.  One lucky fan will take home $500 cash during the largest t-shirt toss of the season! (over 200 t-shirts will be tossed into the crowd with 1 lucky t-shirt containing $500!). Thursday will mark a 2-3-4 Weekday as fans can enjoy $2 popcorn, $3 soda, and $4 bud lights in the Bud Light Lounge.