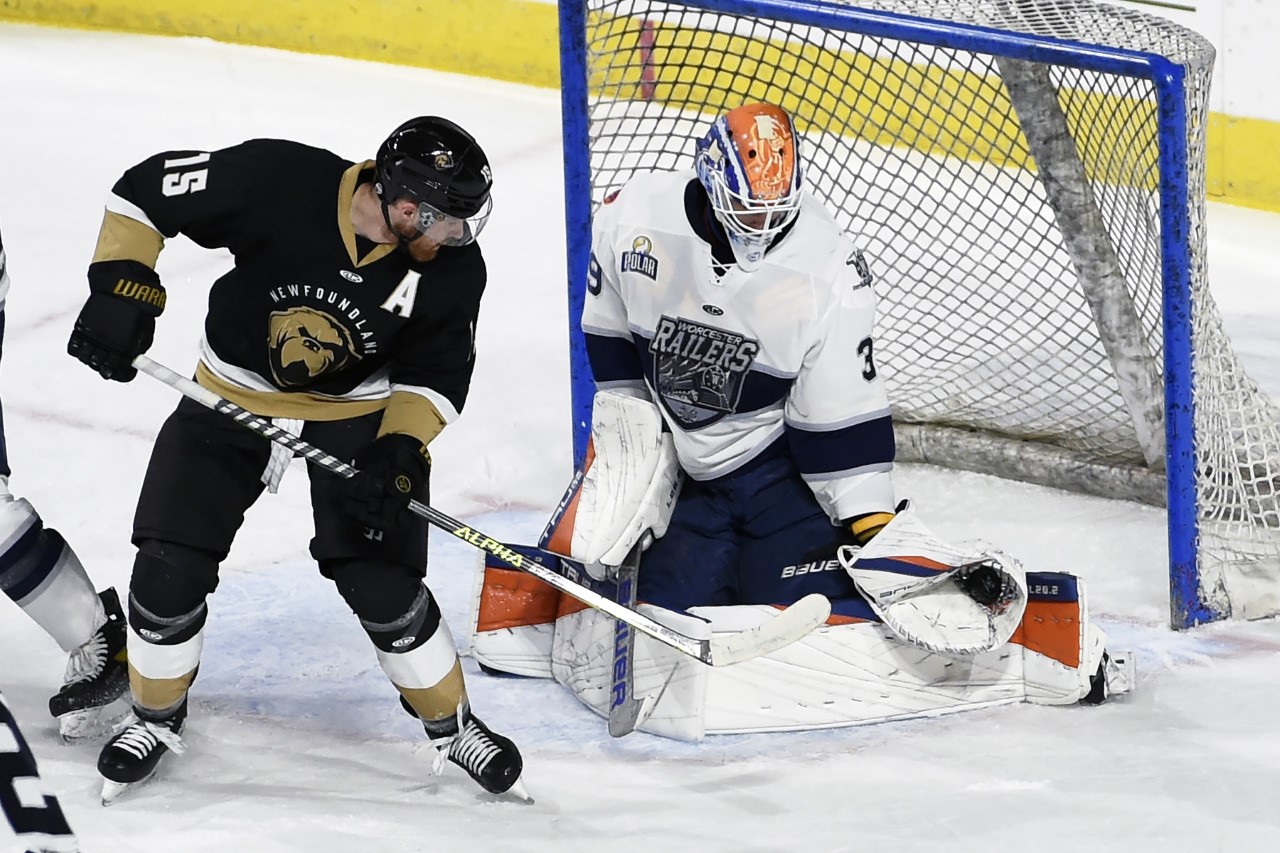 WORCESTER – There will be at least 22 more hockey games in the DCU Center — hopefully more including playoffs — but there might not be a better one than the Railers and Growlers played Sunday, Worcester winning by 4-1.

It was not a three-goal game, no matter the final score.

Worcester came back from a 1-0 deficit and had built a 3-1 lead with less than three minutes to play in the third period. However, Myles McGurty was called for interference at  17:36. Newfoundland pulled goalie Luke Cavallin and had two extra skaters but the Railers — thanks in large part to goaltender Henrik Tikkanen — held the lead until Brent Beaudoin hit an empty net with three seconds left.

It was a “Who cares what the Patriots score is, don’t leave your seat” kind of match.

Coach Jordan Smotherman said the people on the benches had that same feeling.

“Certainly, we’re right in the moment,” he said, “so it’s not as apparent to us, but as coaches and players, we feel it too. You know when a game is being played well.”

One of the reasons the outcome was in doubt until the final minutes was goaltending. Both Cavallin and Tikkanen were terrific, denying great chance after great chance. Tikkanen made 33 saves, Cavallin 30.

“It could easily have been a 6-5 game,” Smotherman said of the goalies. “Teeks has come up big for us continuously, making the big save when we need it, and we rely on him.”

The victory allowed the Railers to sweep the two-game series here and move into a tie for first place in the North Division with Newfoundland. Both teams have 37 points in 26 games.

The first period ended with the score 0-0 for just the third time in Worcester’s 26 games. Newfoundland had an edge in shots on goal at 14-9 as the Railers did  not have quite the same jump as early Saturday night. Tikkanen helped keep it scoreless with some good goaltending.

After going 0 for 14 in the first period, the Growlers scored on their first shot of the second period as Walker nicely finished a partial breakaway to put his team ahead at 1:06.

Newfoundland maintained that lead deep into the period but the quality of Worcester’s scoring chances improved as play went on. Repaci had a breakaway at 13:25 but couldn’t score. Then Vesey was sent in cleanly by Liam Coughlin at 14:32 and tied the game by beating Cavallin with a 20-foot wrist shot.

It was still 1-1 when Repaci scored at 2:17 of the third period. It was at a point where the game had a next-goal-wins feeling and snapped a little stretch where Repaci was getting chances but not scoring, like in the second period breakaway.

“That’s the thing,” he said. “You’ve just got to stay positive. If you keep getting tons of chances, eventually something’s gonna go in. You just have to stay with it. If I hadn’t been getting chances, then I would have been concerned.”

The goal was Repaci’s 28th all-time for the Railers. He is tied for fourth on that list; next up with 30 is Smotherman.

The game winner was set up when Beaudoin won a faceoff and got the puck to Blake Christensen. Cavallin stopped that shot but Repaci, in close, popped the rebound home. Adams made it 3-1 on a power play at 16:38 as he created some space for himself at the bottom of the right circle and beat Cavallin to the far side.

The four goals brought the Railers season total to 102. They are, to date, the best offensive team in Worcester pro history. It took them 26 games to hit triple figures. No other team in any other league hit 100 in fewer than 30 games.

MAKING TRACKS – The Railers have one more game at the DCU Center this year, New Year’s Eve versus Maine. Worcester embarks on a four-game road trip this week that opens at Trois-Rivieres Wednesday night. …McGurty is a changed man on defense this season. He is 1-11-12 after just 24 games this season, more points than he had last season when he was 1-9-10 in 60 games. … Tikkanen was the No. 1 Star and is the Railers leader in Three Stars points through 26 games. He has 30 points including four No. 1 picks. Blade Jenkins is second with 15 points. … Former Sharks defenseman Marc Busenburg from Shrewsbury was back on the DCU Center ice, this time as a coach for one of the ring toss teams after the first period. … Not only is Growlers’ forward Zach O’Brien the ECHL’s leading scorer, he has the best facial hair in at least the North Division. … The only change from Saturday night for the Railers was Jeff Solow in the lineup, Christian Evers in street clothes. That meant that Solow was on the ice opposite his cousin from Newfoundland, Zach Solow. Jeff won the individual battle, picking up an assist while Zach was pointless.