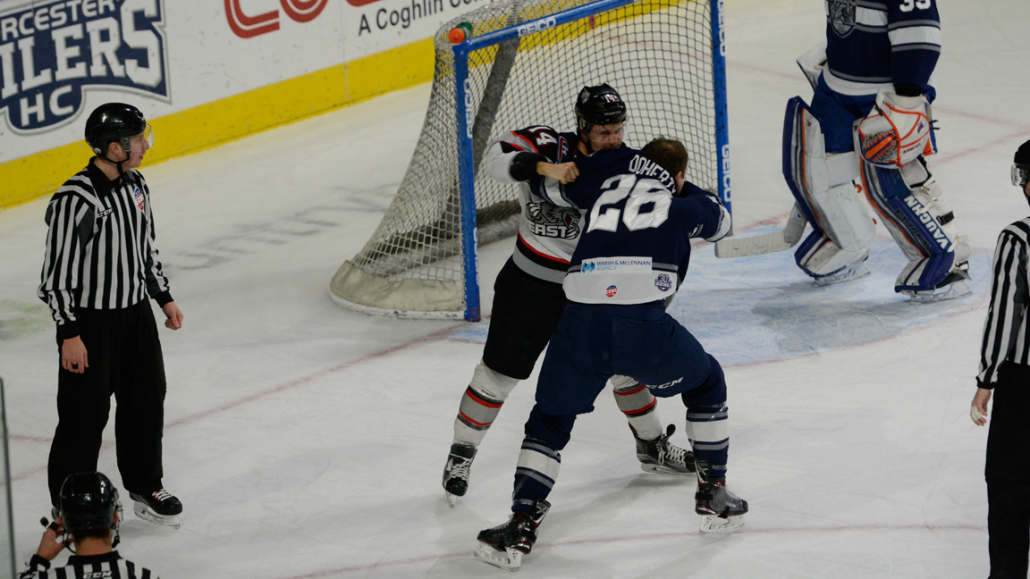 Meeting 3 of 7 vs. Brampton this season

Railers super on Saturday in 5-2 win on home ice vs. the Beast

Railers 11 game homestand continues on a Wednesday vs. the Reading Royals

Nick Saracino scored twice, Jeff Kubiak recorded a Gordie Howe hat trick, TJ Syner recorded three assists, and Eamon McAdam made 23 saves in net as the Railers extended their point streak to a season high five straight games (4-0-1).  Tommy Kelley and Matty Gaudreau also scored for the Railers in a feisty affair that saw three fights in the second period and a lot of crushing checks.

Brampton struck first as Stefan Fournier (10th) broke down the leftwing side and shuffled the puck past Eamon McAdam with a strong move through the top of the slot at 5:05 of the first period.  The Railers would tie the score at 9:22 as Nick Saracino (5th) fired home a loose puck on the power play assisted by Barry Almeida and Brock Beukeboom.  Natick, MA native Tommy Kelley (2nd) would score his first goal as a Railer as he dug the puck out of the corner and ripped a shot just inside the crossbar and past goaltender Andrew D’Agostini at 15:30 to give the Railers a 2-1 advantage. Worcester led 2-1 after 20 minutes and had an 8-7 lead in shots.

A wild second period saw three fights and three goals in a wildly entertaining second period of play. Matty Gaudreau (9th) scored from behind the goal line at 2:03 to give the Railers a 3-1 lead early in the second period. Nick Saracino (6th) struck again with an awesome shot in stride from the left side after a terrific pass by Barry Almeida at 5:49 as the Railers led 4-1.  Then the fireworks erupted as Yanick Turcotte (16th FM) dropped the mitts and the helmet vs. Stefan Fournier at 11:53. Connor Doherty (2nd FM) threw a thunderous check and then had to fight Vincent Dunn at 15:29.  Brandon MacLean (11th) got the Beast back within two goals after he slid a backhander on the rush past McAdam at 17:32.  Jeff Kubiak (2nd FM) and Mike Folkes threw knuckles at 19:08 to end a feisty middle frame.  Eamon McAdam made several great saves in the period as Worcester took a 4-2 lead into the second intermission.

Jeff Kubiak (7th) scored the only goal in the third period to complete the Gordie Howe hattrick at 13:27 as he grabbed a loose puck and fired through a screen to give Worcester a 5-2 lead.  Eamon McAdam made eight more saves in the third period for his 11th win of the season as the Railers improved back to .500.

Notes: Three Stars: 3rd star: TJ Syner (0-3-3) 2nd star: Jeff Kubiak (Gordie Howe hat trick) 1st star: Nick Saracino (2 goals) …Final shots were 28-25 in favor of Worcester… Andrew D’Agostoni (6-9-3) made 23 saves on 28 shots for Brampton…. Eamon McAdam (11-9-6) made 23 saves on 25 shots for Worcester… Joe Spagnoli was the backup goalie (on an emergency basis)…. Worcester went 1-for-4 on the power play while Brampton went 0-for-1…Josh Monk (inj), Ashton Rome (inj), Frankie DiChiara, and Brian Bowen did not dress for Worcester… Kellen Jones and Mike Cornell are currently on recall with the Bridgeport Sound Tigers while Mitch Gillam is with Utica…before the game the Railers received defenseman Anthony Calabrese from the waiver wire after he was released by the Allen Americans – Calabrese will report to Worcester on Sunday….Worcester improved to 10-10-2-0 on home ice…. Jeff Kubiak has five points (3-2-5) in his last three games….Nick Saracino now has nine points in his last eight games (3-6-9)… Barry Almeida added two assists…..Brampton came into the contest with an ECHL low 10 fighting majors but had three in second period….the Railers now have 34 fighting majors….Justin Hamonic picked up his 4th assist of the season.

On Wednesday, Feb 7 the Railers host the Reading Royals at 7:05pm.  Score $5 off any ticket at the Box Office by showing your Price Chopper advantage card!

On Saturday, Feb 10 the Railers host the Brampton Beast at 7:05pm on PINK IN THE RINK NIGHT on a BIG GAME SATURDAY!  The ice will be pink and the Railers will wear a pink jersey to benefit the Cup Crusaders!  Help raise money and awareness for breast cancer!

Railers cough up two goal lead in third period and fall in overtime to Thun...What’s on tap? – Railers wrap up eleven game homestand with three games...
Scroll to top