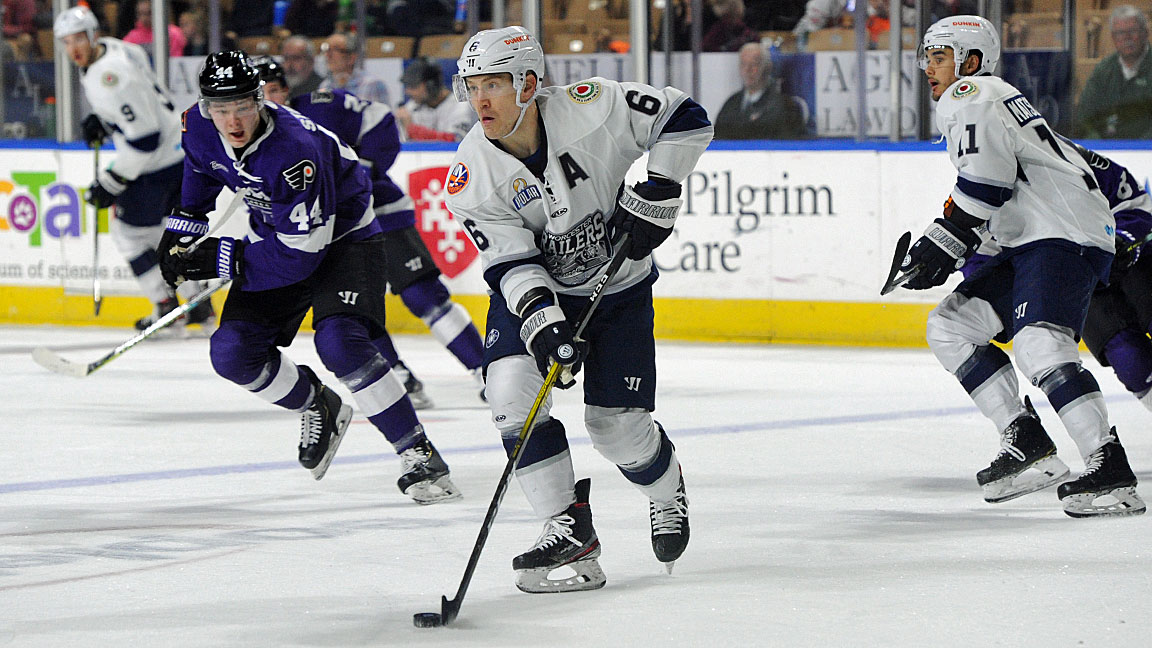 Meeting 12 of 13 vs. Reading this season

Attendance of 7,081 second biggest crowd at the DCU Center this year

The Railers surrendered three goals in the opening 7:53 of the second period, a period where they allowed four goals, two of which came on the power-play. Former Railer Frank DiChiara (1-0-1) potted another goal against his former club while Felix Sandstrom made 22 saves in net for the win. Worcester got goals from Shane Walsh (1-0-1) and Lincoln Griffin (1-0-0) while Evan Buitenhuis made 23 saves in net for the loss.

Midway through the opening period Shane Walsh (13th) scored a greasy goal tucking the puck of the left pad of Felix Sandstrom from the near side post that inched across the goal line by a couple of inches to give Worcester a 1-0 lead at 10:04. The Railers led 1-0 through 20 minutes of play and outshot Reading 6-5.

Thomas Ebbing (10th) started the scoring in the second at 2:48 to tie the game at 1-1 and then on the power-play Frank DiChiara (22nd) from his usual spot handed Reading a 2-1 advantage 4:03 into the stanza. Back to work on the power-play Brayden Low (18th) converted at 7:53 to increase the Royals lead to 3-1. Trevor Gooch (12th) sent a wrister from the left circle over the far shoulder of Evan Buitenhuis that found the back of the net. The goal was reviewed, and it stood as a good goal giving Reading a 4-1 lead at 16:39. The Royals took a 4-1 lead into the dressing room through 40 minutes of play as Worcester was held to just five shots in the middle period.

Lincoln Griffin (3rd) provided some life for Worcester after banging home a rebound on the near post after an initial point shot from Ivan Chukarov which put Worcester down just 4-2 at 9:55 of the third period. Garrett Cecere (3rd) put the icing on the cake with an empty net tally at 17:32 to hand Reading a 5-2 victory.

Notes: Three Stars: 3rd star: Eric Knodel (0-1-1) 2nd star: Lincoln Griffin (1-0-1, +1) 1st star: Thomas Ebbing (1-1-2)…. final shots were 28-24 in favor of Reading …. Felix Sandstrom (12-11-1) made 22 saves on 24 shots for Reading…. Evan Buitenhuis (12-19-1) made 23 saves on 37 shots for Worcester while Ian Milosz served as the backup…. Worcester went 0-for-3 on the power play while Reading went 2-for-4…., JD Dudek (IR), Kyle Thomas (IR), Yanick Turcotte (IR), Tanner Pond (IR), Connor Doherty, and Jack Macnee did not dress for Worcester…. Nic Pierog, Ben Thomson, Arnaud Durandeau, and Linus Soderstrom are all with the Bridgeport Sound Tigers…. Bo Brauer was traded to Rapid City on Thursday while Cody Payne was traded to Indy…. Billy Vizzo and Nick DeVito signed ECHL contracts with Worcester on Wednesday…. Billy Vizzo made his pro debut and wore number 17 and finished with three shots…. Nick DeVito made his pro debut and wore number 21 and recorded an assist…. Justin Murray has now played in 49 straight games…. Lenny DiNardo signed autographs and met with fans prior to the game…. The 2013 World Series Trophy was in the building…. Reading clinched a playoff spot with the win…. Worcester has 13 games left on the regular season seven of which are at the DCU Center…. The Railers are now 16-15-1-0 all-time vs. the Royals and 9-6-1-0 at the DCU Center.