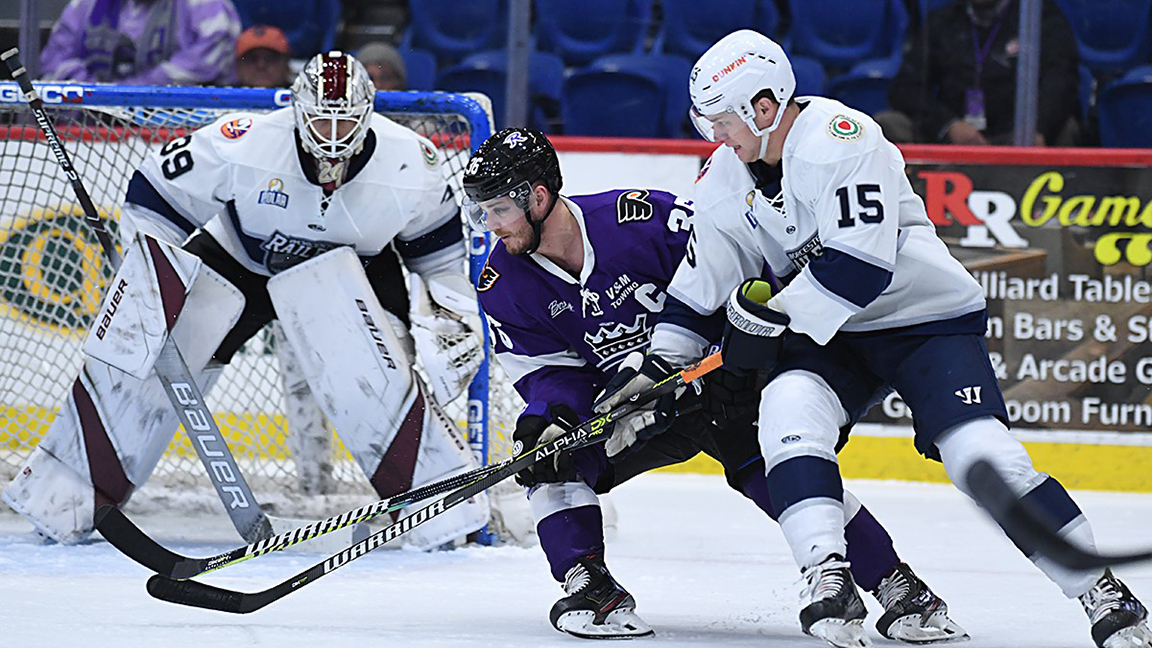 Meeting 6 of 13 vs. Reading this season

Reading, PA – The Worcester Railers HC(15-23-2-0, 32pts)allowed three power play goals and dropped their third straight game in a 5-1 road loss to the host Reading Royals (22-13-4-0,48pts) in front of 2,388 fans at the SantanderArena late Sunday afternoon.The two teams will battle again with a 1pm start in Reading for one last game before the ECHL All-Star Break.

Ross Olsson scored the only Railers goal while netminder Ian Milosz made 33 saves on 37 shots for Worcester in his first Sunday loss of the season.  Corey Mackin (1-2-3), Steven Swavely (1-1-2), and Garrett Mitchell (1-1-2) led the way offensively for the Royals while Kirill Ustimenko made 31 saves in net for his 15thwin of the season.  Worcester has now been outscored 12-1 in their last seven periods of play and now 0-3-0-0 on their five-game road trip.

Reading grabbed a 1-0 lead as Hayden Hodgson (6th) snapped a power play goal from the left slot at 8:10 of the first period. The Railers would fire four shots on their man advantage just a few minutes later but Reading netminder Kirill Ustimenko stood tall to keep Worcester at bay.  Shots were 9-8 in favor of Reading through 20 minutes with Worcester trailing 1-0.

The Royals struck again on the power play as Steven Swavely found captain Garrett Mitchell (7th) high in the right slot at 13:07 of the second period.  Corey Mackin (14th) came rushing down the middle and one-timed a rebound opportunity at 15:31 to put Worcester down 3-0.  Shots were 25-15 in favor of the Royals after 20 minutes of play and held a 3-0 advantage.

The Railers scored their first goal in 124:00 as Ross Olsson (9th) defected a Phil Johansson shot from the point that snuck through the Royals netminder at 2:12 of the third period.  Reading would net the next two as Steven Swavely (7th) put Reading ahead 4-1 at 12:07 with another power play goal while Brayden Low (10th) scored an unassisted empty netter at 19:46 to give the Royals a 5-1 home win.

Notes: Three Stars: 3rd star: Steven Swavely (1-1-2), 2nd star: Garrett Mitchell  (1-1-2) 1st star: Corey Mackin (1-2-3) …. final shots were 38-32  in favor of Reading…Kirill Ustimenko (15-4-4) made 31 saves on 32 shots for Reading… Ian Milosz (3-3-0) made 33 saves on 37 shots for Worcester while Evan Buitenhuis served as the backup…. Worcester went 0-for-5 on the power play while Reading went 3-for-5…. Cody Payne, Yanick Turcotte, Connor Doherty, Ivan Chukarov (INJ), JD Dudek (IR), and Tanner Pond (IR) did not dress for Worcester….Eric Cairns, Chris Terreri, and Bob Deraney were behind the bench for the Railers as coach Cunniff served game one of his two game ECHL suspension….Bo Brauer skated on the blue line for Worcester….before the game, the Bridgeport Sound Tigers loaned Ryan MacKinnon back to Worcester leaving Mike Cornell, David Quenneville, Linus Soderstrom, and Jakub Skarek with the Bridgeport Sound Tigers….Kyle McKenzie celebrated hist 27th birthday…Nic Pierog led all Worcester skaters with seven shots… Dante Salituro added five shots on goal….the Railers are now 11-13-1-0 under GM/coach Cunniff….Worcester is now 7-12-2-0 on the road this season….The Railers are now 15-10-1-0 all-time vs. the Royals and 6-8-0-0 at the Santander Arena.

What’s on tap – One more before ECHL All-Star Break!

The Worcester Railers tangle with the Royals again on Monday in Ready with a 1pm start before a three-day ECHL All-Star break.

ICYMI – Ricky Duran from the Voice will sing the anthem and sign autographs before the Railers game on PINK in the RINK Night on Saturday, Feb 8.  More information at www.RailersHC.com.