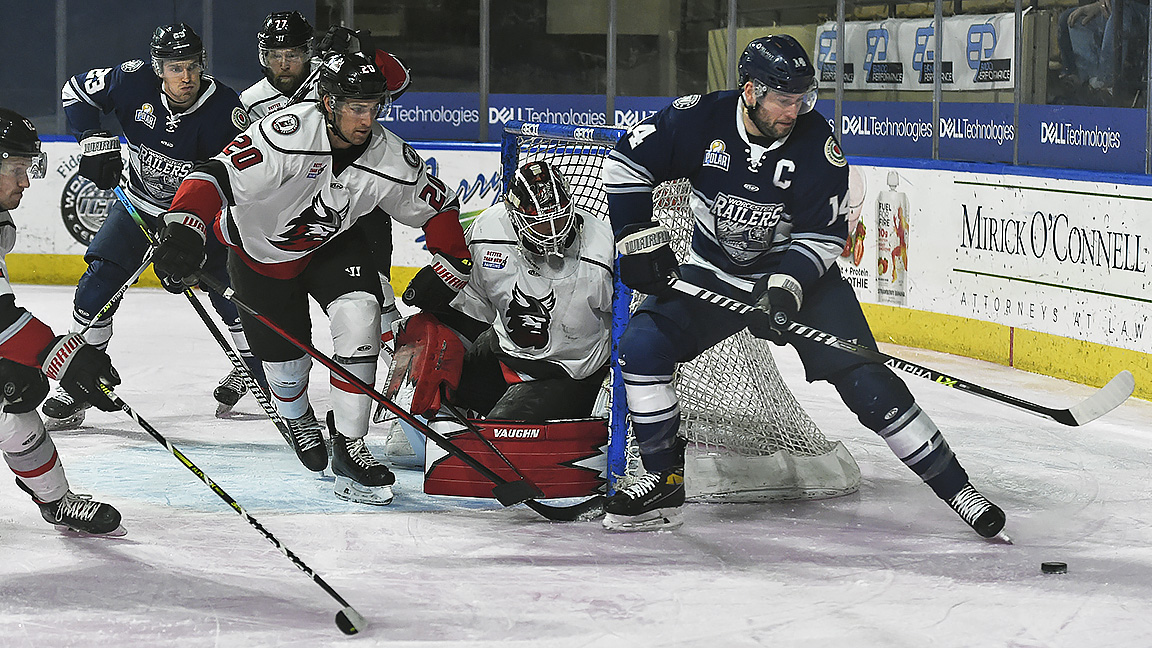 Railers Rally In The Third For 4-2 Win Over Adirondack

WORCESTER, Mass. – The Railers beat the Adirondack Thunder, 4-2, for the second time in less than 48 hours. The victory allowed the Railers to finish a successful homestand with a 4-2-1 record.

They could have had another point, probably two, without the late-game goals from Kalamazoo but they bounced back well against a divisional rival.

For the second straight game, Nolan Vesey closed things out with an empty net goal. Don’t confuse those with gifts. A one-goal game, especially versus a division rival, can be a two-point swing in the standings.

“He’s out there for a reason,” coach David Cunniff said. “He’s glue. He’s like (Jordan) Smotherman, a core guy for us. He does things the right way. He doesn’t jump out at you. He’s not flashy, but I’ll take efficiency over prettiness any day of the week.”

Anthony Repaci, Ross Olsson and Jacob Hayhurst had the other Worcester goals. Robbie Payne and Tyler Irvine scored for Adirondack.

The Railers scored first for the fourth straight time.

Repaci got the goal at 4:10 of the first period as Worcester converted a power play chance. The Railers did something that they have been a victim of several times this season — turn a great save by the goalie into a goal at the other end.

Colten Ellis stopped a shorthanded 2 on 1 bid, his pad save sending the puck the other way. Matt Sredl got it to Repaci and he fired a low wrist shot home from the left circle.

Ellis got an assist, his third of the season. That ties him with Evan Buitenhuis for the team record. He had three in 2019-20. The all-time Worcester record is four, done by the IceCats’ Brent Johnson in 1998-99.

Payne made it 1-1 at 11:02, scoring on a high wrist shot from the left corner. The score did not change for almost 40 minutes.

When it did, the Railers took the lead for good as Olsson was set up nicely in the slot for a power play goal at 10:11 of the third period. It was Olsson’s 14th goal of the season, ninth on the power play, and 28th of his career in Worcester.

He is tied for second with Tyler Barnes’ on the team’s all-time goal scoring list, well behind Barry Almeida’s 60.

Hayhurst made it 3-1 33 seconds later then Irvine popped in a power play rebound at 14:20 to tighten things up. Vesey’s empty-netter came at 19:37.

Ellis stopped 28 of 30 shots and is 6-0-2 in his last eight games. He has allowed exactly two goals in each of his last four starts which figures out to an average of — let’s do the math — 2.00. More importantly, his saves percentage in that span is .938.

The Railers are out of town for a while. They head for Utah in the darkness of Wednesday morning, a critical road trip beckoning.The Railers will play six games in a span of nine days. The games commence Friday night in Utah. The Railers will also play in Salt Lake City Saturday and Monday, then head north to Boise for games Wednesday, Friday and Saturday.

They have played in Utah twice before, the fourth and fifth games of their inaugural season in 2017-18. Worcester did well in Salt Lake City, earning three of a possible four points via a 5-4 overtime loss and 4-1 victory. The Railers have never played Idaho before.

Worcester, like many ECHL teams, has been very competitive on long road trips. The Railers have had two longer than this one, both at this time of the season. They were 3-3-1 in 2018, 3-2-2 in February of 2019.

“We’re looking forward to it,” said an upbeat Cunniff.

MAKING TRACKS_Smotherman set two Railers records with his two-goal game Saturday night. It was his sixth multi-goal game of the season and career. The previous records were five in both categories, done by Tyler Barnes in 2018-19. … Myles McGurty and Nick Albano were back in the lineup, Will Cullen and Reece Newkirk out. McGurty picked up his third point of the season, an assist on Vesey’s goal … The next ECHL game at the DCU Center is scheduled for March 4, Worcester taking on Reading.  … Referee Brett Roeland was busy as the teams combined for 11 power plays. Worcester killed 5 of 6 for one of its best games of the season in that department.

March 3 in 3 Weekend
Scroll to top