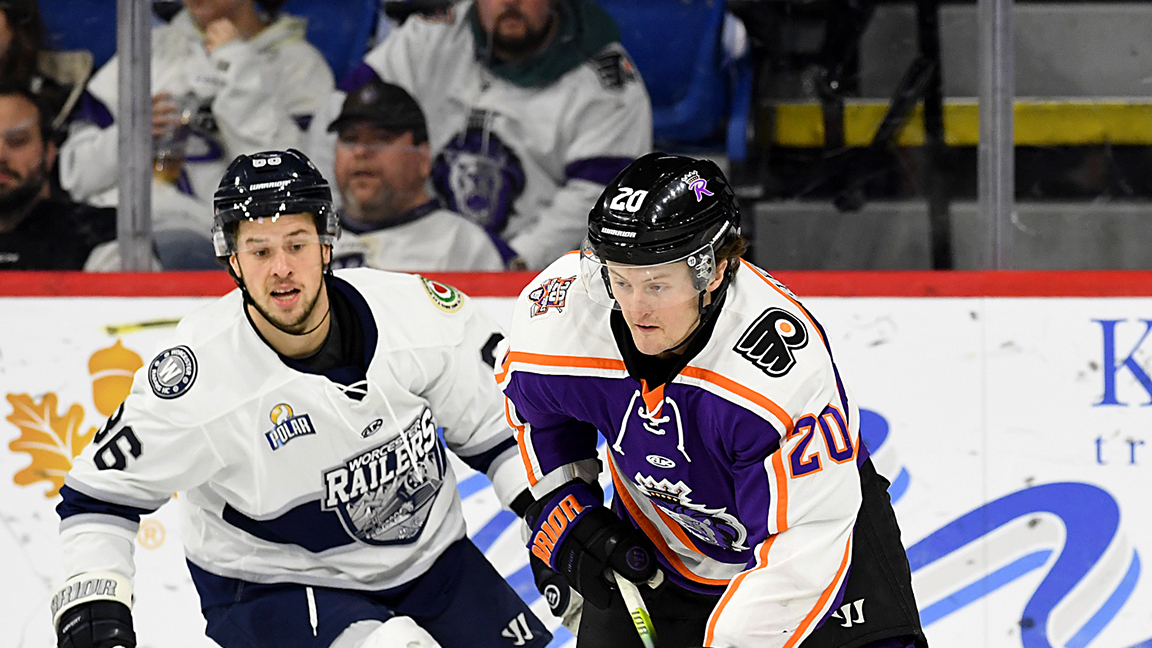 Worcester Railers HC vs. Reading Royals
January 8th, 2022
Santander Arena
Meeting 4 of 12 vs. Reading this season
Railers are 1-2-1-0 vs. the Royals this season

Railers Rally In Second Period But Fall Short In Reading

Reading scored three times in a span of 3:54 in the later stages of the third period to hold a 3-0 lead over Worcester after 20 minutes of play. After a five-minute major assessed to the Royals in the middle half of period two Anthony Repaci (1-0-1) and Cole Coskey (1-0-0) would score on the man advantage to cut the deficit down to 3-2. The game was still 3-2 with 1:55 left in regulation when Jackson Cressey (1-0-1) tacked on the insurance goal followed by an empty net tally with 62 seconds to play to make the Reading lead 5-2. Patrick Bajkov (3-0-3) would cap off the hat-trick on the power play with just 32 seconds to play to hand the Royals a 6-2 win.

The game was scoreless until 13:34 of the first period when Brayden Low (7th) deflected a shot home at the top of the crease and then Patrick Bajkov (9th) found the back of the net from the top of the crease at 15:18 to hand the Royals a 2-0 lead. Bajkov (10th) would then notch his second goal of the game which came on the power play at 17:28 as the Royals held a 3-0 lead after the first 20 minutes of play as they outshot Worcester 13-6.

After a five-minute spearing call assessed to Reading’s Brayden Low at 12:14 of the second frame, the Railers would make the Royals pay. Anthony Repaci (6th) was set up by Jordan Lavallee-Smotherman and from the right circle Repaci roofed it over the glove of Kirill Ustimenko to cut the Railers deficit down to 3-1. Then at 15:08 Cole Coskey (1st) notched his first ECHL goal on a one-time feed from Mathias Lafferiere in which Coskey lasered the puck over the blocker of a sprawling Ustimenko from the left circle. Worcester trailed 3-2 after 40 minutes of play but outshot the Royals 18-5 in the stanza.

The game remained 3-2 until 1:55 left in regulation when Jackson Cressey (4th) would tack on an insurance goal to make it 4-2. Grant Cooper would score on an empty-net with 62 seconds to go in to the contest to increase the lead to 5-2. The Royals then grabbed a late power play and Patrick Bajkov (10th) would cap off the hat-trick with just 31 seconds to play as the Royals defeated the Railers 6-2.

Royals Storm Back Late to Defeat Railers 3-2 in Overtime