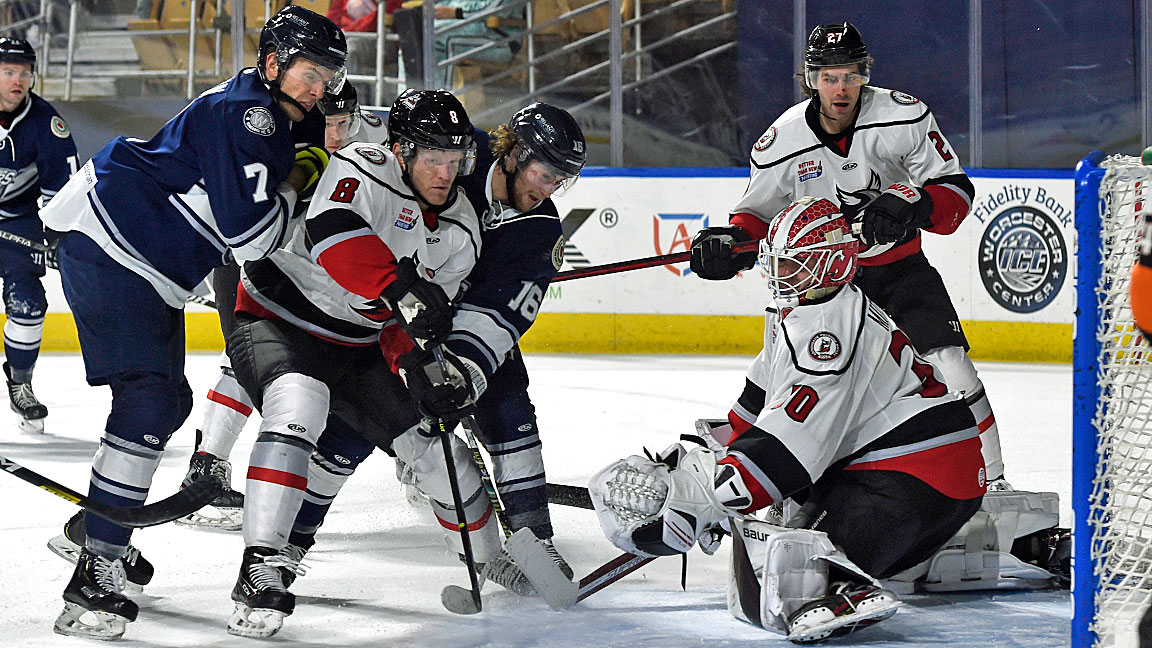 The Railers lost at the DCU Center Friday night, this time by 3-2 to the Adirondack Thunder.

Robbie Payne, Tyler Irvine and Samuel Laberge scored for the Thunder. Ross Olsson and Liam Coughlin had the Worcester goals. The Railers were stymied by Adirondack goalie Mareks Mitens, who was superb with 40 saves.

“We didn’t play well against Newfoundland,” said Olsson, “but I thought we did the last two games. Both goalies made a lot of stops and tonight, we had the 40 shots and of those, we had to have had 25 good chances.

“You hate to say this, but it’s a long season and we’ll play these guys another, like, 12 more times. We’ve just got to bear down. We got some chances tonight, some rebounds, and we’ve got to bear down more on those.”

Worcester has also been dealing with a lot of roster flux.

Most ECHL teams reach survival mode with their rosters at some point in the season but the Railers got there early. Denuded by callups to the AHL and virus issues throughout its higher affiliates, Worcester has had to scramble to put 18 players in uniform some nights.

It was 2-2 after 41 minutes, then Payne broke the tie at 1:11 of the third. He had the puck in the right circle and fell to his knees. Still, he stickhandled through a couple of Railers skates, got back on his feet in front of the Worcester net and slid a short backhander past Colten Ellis to give the Thunder the lead for good.

The teams traded goals in the first period. Laberge had one for Adirondack at 8:17; Olsson scored for the Railers at 9:35. His goal was a deflection from the slot off Zach Malatesta’s feed from the left point. It was Olsson’s fifth goal in the last eight games this season and the 20th of his Railers career.

It was also just the third goal Worcester has scored in the first period in eight home games this season.

The second period was much the same and the game was 2-2 after two even though the Railers outshot the Thunder, 20-5.

Irvine scored from between the circles at 10:30. Coughlin responded at 17:03, notching Worcester’s first 5 on 3 goal of the season, and his third in the last four games.

He converted Jacob Hayhurst’s pass at the top of the crease.

MAKING TRACKS_The homestand finishes with a game here against Maine at 10:05 Wednesday morning. The building will be noisy with a few thousand students in the house. … The Railers created some Worcester hockey history with their shootout victory over Maine here Wednesday night. Their five goals were the most ever for a Worcester team, surpassing the four scored by the Sharks in a loss at Manchester on Dec. 5, 2009. … Linesman Chris Provost seems to be, unofficially, the tallest linesman ever to work a pro game at the DCU Center. … The Thunder has two ex-Railers on the roster, goalie Alex Sakellaropoulos and defenseman Ivan Chukarov, but neither played. … Jordan Smotherman had an assist and is 1-5-6 in his last four games. … Attendance was 2,706. … The Railers have yet to win two in a row this season.

Anthony Repaci Nets Overtime Winner in a 7-6 Thriller on the Annual School Day...
Scroll to top