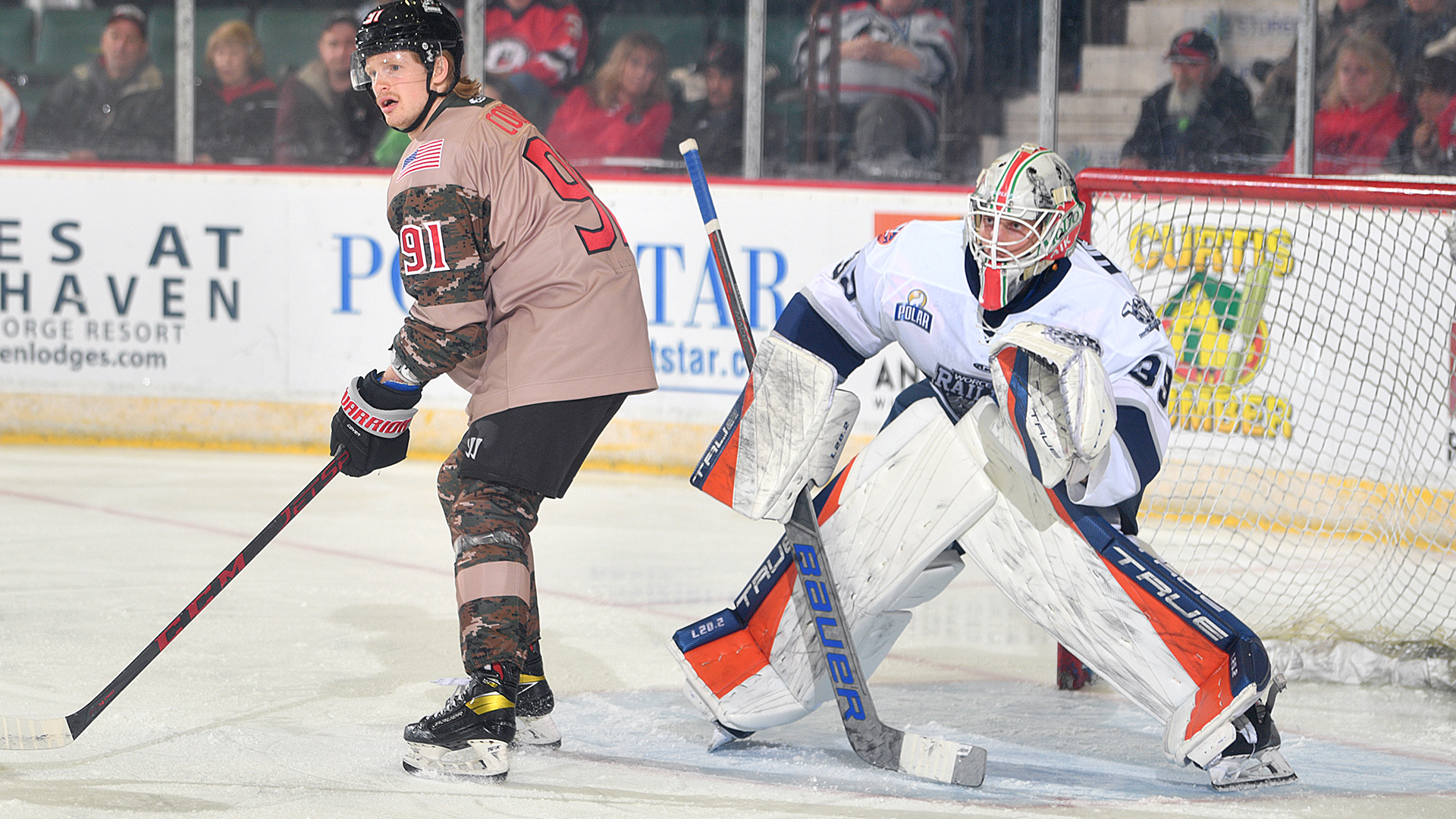 Meeting 6 of 17 vs. Adirondack this season

Worcester’s Quin Ryan (1-1-2) opened the scoring with a shorthanded goal early in the first to put Worcester up 1-0. Adirondack tied things in the third thanks to former Railer Grant Jozefek (1-0-1). Reece Newkirk (1-0-1) put Worcester back up with his fifth of the season, just for Shane Harper (1-0-1) to tie it up with just 1:48 remaining in the game. Neither team scored in the overtime period, as Bobby Butler’s dribbler through Theut’s legs and Tikkanen’s standout effort in the shootout made the difference and gave Worcester the shootout win, 3-2.

Quin Ryan (3rd) scored the first goal of the game shorthanded 4:53 into the first. He broke free down the right side and sniped the top right corner of the net past Jake Theut to make it 1-0 Worcester. The goal marked the second straight game with a goal for Ryan, and his fourth straight game with a point.  It was the second shorthanded goal of the season for the Railers. Neither team scored for the rest of the period as the Railers held onto a 1-0 lead going into the first intermission.

It was a scoreless second period, but not an uneventful one. There were seven total penalty minutes assessed against the Railers, and nine against the Thunder. Yannick Turcotte delivered a high hit on Worcester’s Bobby Butler, sending Butler to the ice and getting Turcotte ejected from the game. Turcotte was playing in just his second game coming off a five-game suspension. Liam Coughlin then jumped in and fought Turcotte for his first fighting major since November 26th, 2021, when the Railers again made a trip up to Glens Falls. Shots favored Worcester in the second 9-6, and the Railers in the game 20-16.

In the third, Grant Jozefek (2nd) scored for the second straight game this time tying it up 1-1 with 14:11 left in the game. Reece Newkirk (5th) would then put the Railers back out in front just 1:42 later thanks to Quin Ryan’s assist and second point of the night to make it 2-1 Railers. The Thunder struck back with time running out to tie the game up. Shane Harper (2nd) shot a puck on the net out in front, off a quick pass from Sebastian Vidmar, and made it 2-2 with only 1:48 remaining. The two teams skated out the remaining 108 seconds, as the game was headed to overtime. Shots in the third favored Worcester 12-11, and through regulation favored the Railers 32-27.

A high-flying overtime period heavily favored Adirondack and would have likely won them the game against any goalie other than Henrik Tikkanen, who stood tall and made seven saves in the extra frame to send the Railers to their first shootout of the season.

Shane Harper got things started by skating in and missing wide left past Tikkanen to put Adirondack down in the shootout early. Blake Christensen dangled his way out in front and faked Theut out of his net to put Worcester ahead 1-0 after the first round of the shootout. In the second round, Vladislav Mikhalchuk blazed down the left side and tucked one far side past the left leg of Tikkanen to tie the shootout 1-1 in the first half of the second round. Bobby Butler was tasked with the Railers second shot. He raced up the left side and squeaked one through the five-hole of Theut. Theut got 90% of the puck on the save attempt, but the final 10% enabled the puck to trickle past Theut and barely cross the goal line, giving Worcester the 2-1 advantage through two rounds. It was Xavier Parent’s turn to shoot with the game riding on his stick, but Henrik Tikkanen maintained the composure he held all night long and made the save, securing the 3-2 win in the shootout.