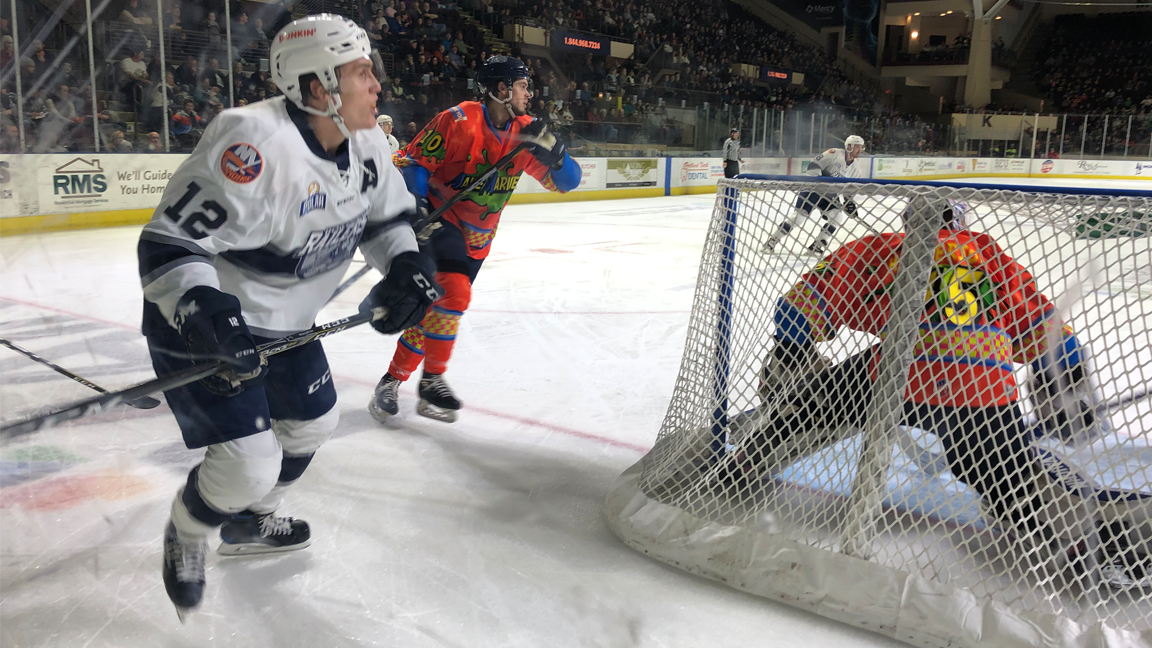 Meeting 8 of 14 vs. Maine this season

PORTLAND, ME – The Worcester Railers HC(13-13-3-2, 31pts) had a 2-0 lead through 20 minutes but the host Maine Mariners (17-11-0-1, 35pts) battled back for their 5thstraight win with a 3-2 shootout victory in front of 4,305 fansat the Cross Insurance Arena on Friday evening. The Railers close out the 2018 calendar year on a BIG GAME SATURDAY on Home for the Holidays Night with a 7pm battle vs. the Mariners at the DCU Center.

Matty Gaudreau and Woody Hudson scored first period goals for Worcester while Mitch Gillam made 39 saves in net in the win in his 4thstraight start.  The game featured 58 penalty minutes as Greg Chase and Mike McNicholas evened the score for Maine while Brandon Halverson made 30 saves in net for the win.

Worcester had a terrific first period to grab an early 2-0 lead through 20 minutes of play.  Matty Gaudreau (6th) gave Worcester a 1-0 edge after he took a nice feed into the zone by Mike Cornell and broke across the crease to beat netminder Brandon Halverson at 6:13.  Just seven seconds into Worcester’s only power play, Matty Gaudreau fired a quick shot from the left circle with Woody Hudson (4th) stationed in front and Woody shuffled in a loose rebound from the crease at 17:26.  Shots were 14-11 in favor of Worcester through 20 minutes of play.

Morgan Adams-Moisan threw a dirty hit in front of the Railers bench that went uncalled which led to Mike Cornell dropping the mitts with Adams-Moisan at 42 seconds.  Nick Sorkin picked up his first fighting major vs. Derek Pratt after a questionable hit on Matt Schmalz at 7:13. After Tyler Mueller hit the crossbar, Greg Chase (4th) slammed home a backdoor feed from Ryan Culkin at 9:37 to get the Mariners on the board.  Maine fired 20 shots on net in the middle frame, but Mitch Gillam stood tall as the Railers took a 2-1 lead into the second intermission.

The play was more even in the third period, but Maine would find the equalizer at 14:00 as Mike McNicholas (7th) just squeezed a wraparound attempt into the net to tie the score at 2-2.  Shots were 8-7 in favor of Worcester in the third period as the game headed to overtime.

A wide-open overtime saw both teams have several glorious opportunities as Maine held a 3-2 shot advantage in the extra session. Ivan Kosorenkov was the only shooter to score in the shootout while Alex Kile and Mike McNicholas found the back of the net for Portland as the Mariners came from behind for the 3-2 home victory.

Notes: Three Stars: 3rd star: Matty Gaudreau (1-1-2) 2nd star: Ryan Culkin (0-2-2) 1st star: Mike McNicholas (Goal, SO GWG) …. final shots were 42-32 in favor of Maine…. Brandon Halverson (12-6-1) made 30 saves on 32 shots for Maine…. Mitch Gillam (8-8-1) made 39 saves on 41 shots for Worcester and is now 4-0-1 vs. the Mariners this season…. while Evan Buitenhuis served as the backup…. Worcester went 1-for-4 on the power play while Maine went 0-for-5…. Yanick Turcotte (inj), Kyle McKenzie (inj), David Quenneville (inj), Austin Block, Alex Adams, and Malcolm Gould (inj) did not dress for Worcester…. Jeff Kubiak and Ryan Hitchcock are currently on recall with the Bridgeport Sound Tigers… Ryan MacKinnon now has a four-game point streak (1-4-5) with an assist… the goal by Hudson snapped a 15-game goalless drought….with his 17 penalty minutes tonight, Mike Cornell now has 79 penalty minutes this season…Matty Gaudreau also added an assist and led Worcester with five shots on goal.

On Saturday, Dec 29 the Railers host the Maine Mariners at 7pm on HOME FOR THE HOLIDAYS NIGHT ON A BIG GAME SATURDAY.  The first 2,000 fans will receive a Railers HC texting glove courtesy of UniBank. Every Saturday night home game is SATURDAY NIGHT SIGNINGSpresented by MidState Auto Group with a Railers player signing autographs during the first intermission.