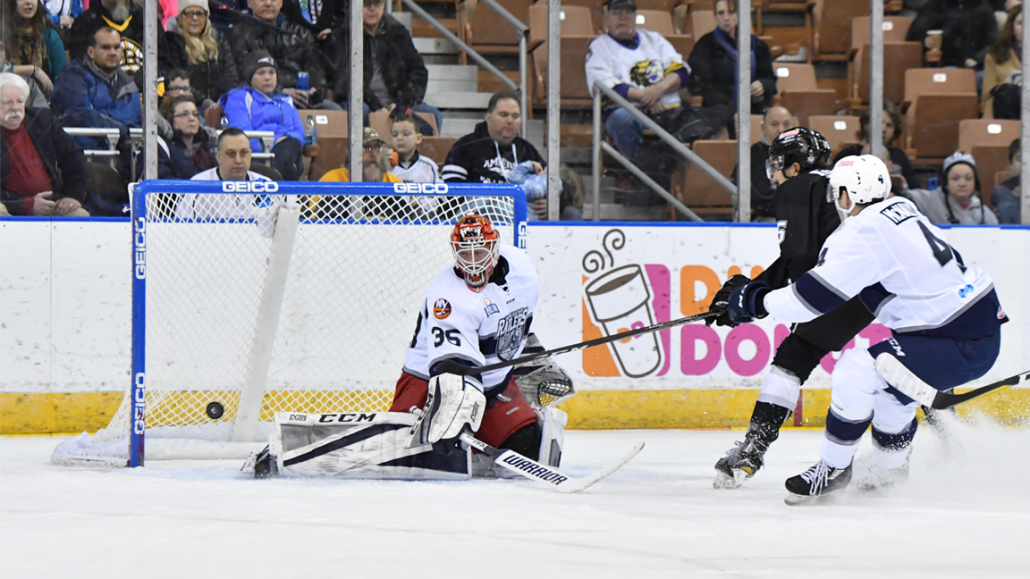 Meeting 9 of 15 vs. Manchester this season

Railers get zonked in Manchester

Nick Saracino and Patrick McNally scored for Worcester while Mitch Gillam was spectacular in net with 35 saves but Monarchs forward Matt Schmalz broke a 2-2 tie as he followed in his own rebound at 19:34 of the third period to give Manchester the victory.  Worcester did not have a single power play and Ashton Rome added two assists on his 32nd birthday as the Railers dropped their third straight game.

Neither team found the back of the net in the first period as Railers goaltender Mitch Gillam made several nice stops and had 14 saves total through 20 minutes of play.  Worcester was only able to manage seven shots on Charles Williams in a quick moving opening frame.

The Railers had good buzz to open the second frame and Nick Saracino (3rd) was able to tap home a loose puck rebound at 2:31 after the initial shot by Kellen Jones was stopped by Charles Williams.  The Monarchs would answer back with a pair of goals just 2:23 apart midway through the period.  Michael Doherty (7th) scored his 5th goal against the Railers this season at 11:00 followed by a goal mouth scramble strike by Zac Lynch (16th) at 13:23. Worcester trailed 2-1 through 40 minutes of play as shots were 20-19 Monarchs.

Mitch Gillam kept the game close with several more great saves to start the third period for the Railers.  Worcester would tie the score at 2-2 as Patrick McNally (12th) scored his team leading 12th goal of the season with a snap shot from the right circle that went off the iron and in at 12:51. After what the Railers believed to be off-sides, Matt Schmalz (9th) raced down the left wing and cut across the crease and was able to fire home his own rebound chance at 19:34 to give the Monarchs a 3-2 edge.  Michael Doherty (8th) added another into an empty net to give the Monarchs a 4-2 win over the Railers.

Notes: Three Stars: 3rd star: Zac Lynch (1-1-2) 2nd star: Michael Doherty (2-1-3) 1st star: Matt Schmalz (GWG) …Final shots were 39-25 in favor of Manchester… Charles Williams (13-5-1) made 23 saves on 25 shots for Manchester…. Mitch Gillam (5-6-0) made 35 saves on 38 shots for Worcester… Eamon McAdam was the backup goalie …. Worcester went 0-for-0 on the power play while Manchester went 0-for-2…. Barry Almeida (inj), Matty Gaudreau (inj), and Josh Monk (inj) did not dress for Worcester…. forward Chris Langkow is still with the Hartford Wolfpack (AHL) on a PTO…. Woody Hudson has scored four goals in the last three games…Wade Murphy (0-3-3) have a three-game point streak…the Railers signed defenseman Sean Gammage before the game from the Birmingham Bulls of the SPHL – Gammage will report to Worcester on Monday…. Ashton Rome (2 assists), Ben Masella and Kellen Jones picked up assists for Worcester…Patrick McNally had 12 penalty minutes and leads all ECHL defensemen with 12 goals.

The Railers host the Reading Royals on Wednesday, Jan 3 at 7:05pm.  Score $5 off any ticket at the Box Office when you show your Price Chopper Advantage Card for any Wednesday night game!