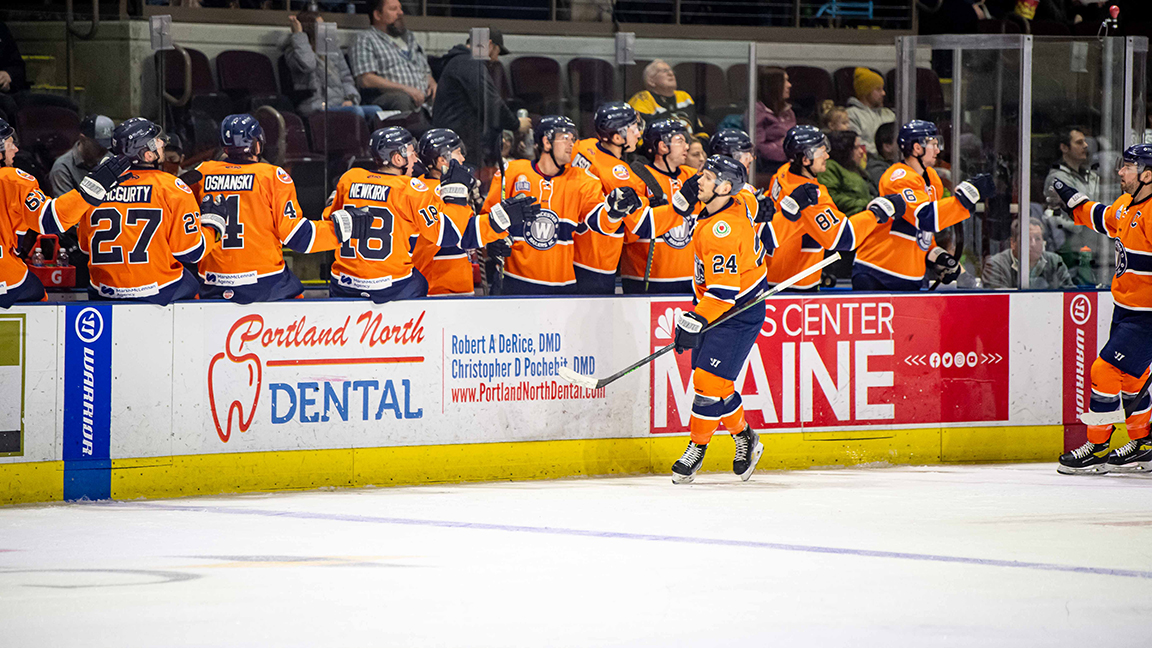 The Railers never trailed in the game leading 1-0 after the first and 4-2 after the first. Jordan Lavallee-Smotherman (2-1-3), Nolan Vesey (0-2-2), Reece Newkirk (0-2-2), and Anthony Repaci (0-2-2) all registered multi-point games while 10 different skaters registered a point. Colten Ellis was outstanding in between the pipes finishing the game with 36 saves including 15 in the final period. Maine received goals from Brendan Robbins (1-1-2), Tyler Hinam (1-1-2), and Marc-Olivier Duquette (1-0-1) while Steffanos Lekkas made 24 saves in net for the loss.

Cole Coskey (9th) would break the ice with just 4:27 to play in the first period when Jordan Lavallee-Smotherman found Coskey through the high slot who wrister one past Steffanos Lekkas to give Worcester a 1-0 lead. Colten Ellis was perfect in the opening 20 minutes of play making 12 saves as the Railers were outshot 12-7.

The Railers received their first power-play of the game 48 seconds into the second period and right as it expired Ross Olsson (18th) in the right circle received a feed from Reeece Newkirk at the far circle and Olsson wasted no time ripping it over the far shoulder of Lekkas to give Worcester a 2-0 lead at 2:48. 1:26 later Marc-Olivier Duqette (6th) would find the back of the net to cut the Railers lead down to 2-1. With 9:47 left in the frame Bobby Butler thought he gave Worcester a 3-1 lead but after a lengthy review it was rule goaltender interreference on the ice. At 13:18 Brent Beuadoin (13th) would be set up from Anthony Repaci and Nolan Vesey to make it 3-1 Worcester. Jordan Lavallee-Smotherman (23rd)  would make it 4-1 with a rebound  in front at 17:54 of the second. 51 seconds later Tyler Hinam (5th) at the top of the crease would deflect one past Colten Ellis to cut the Railers lead down to 4-2. Worcester outshot Maine 14-11 in the second and led 4-2 through 40 minutes of play.

Colten Ellis was put to the task in the first half of the third and stood tall making countless tremendous stops. At 10:43 of the third Jacob Hayhurst (12th) below the right circle received a feed from Nolan Vesey and smashed it home to give Worcester a 5-2 lead. The Railers lead would be cut back to two as Brendan Robbins found the back of the cage for Maine 65 seconds later making it a 5-3 Railers lead. With roughly three minutes remaining in regulation Maine would pull their goaltender and Jordan Lavallee-Smotherman (24th) would polish it off with an empty-netter from Cole Coskey with 2:23 to play. Ellis ended up making 15 saves in the third period en route to a 6-3 Worcester victory.