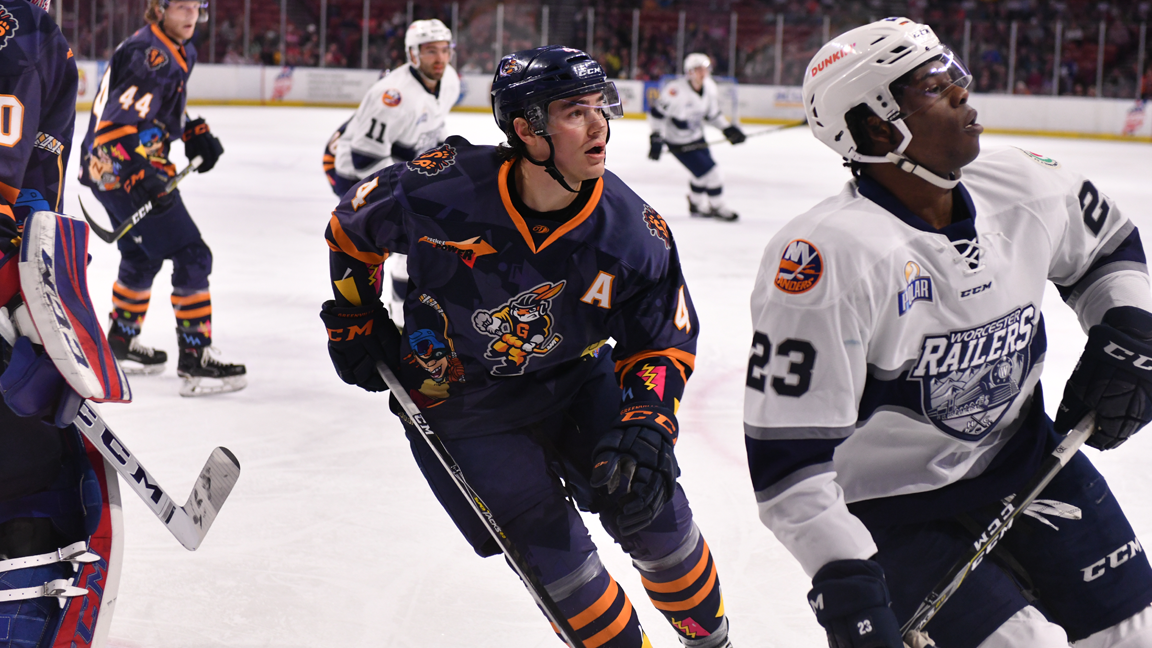 Meeting 1 of 2 vs. Greenville this season

GREENVILLE, SC – The Worcester Railers HC (13-16-3-2, 31pts) continued their three game South Carolina road trip with a 4-1 loss to the hostGreenville Swamp Rabbits (14-18-3-2, 33pts) in front of 4,656 fans at the Bon Secours Wellness Arena on Saturday evening. The Railers three game South Carolina swing concludes on Sunday at 3pm in Greenville vs. the Swamp Rabbits.

Alex Vanier scored his first goal as a member of the Railers while Evan Buitenhuis made 33 saves in net for Worcester in the loss.  Greenville scored four unanswered goals which included two within a 12 second span late in the third period while Chris Nell made 20 saves in net for the win.  A wild brawl broke out with 25 seconds left in the third period which led to several fights by the Greenville bench and led to game misconducts to Yanick Turcotte and Alex Vanier.

Worcester grabbed the lead in the first period just 18 seconds into their first power play as Alex Vanier (1st) scored his first goal as a Railer with a wicked shot from just inside the left circle at 6:18 that beat netminder Chris Nell assisted by Ryan MacKinnon and Barry Almeida.  Evan Buitenhuis made nine first period saves as the Railers took a 1-0 lead into the dressing room through 20 minutes.

Jake Bolton (7th) snuck one through with a quick release from 45 feet at 2:36 of the second period to tie the score at 1-1.  Just two minor penalties were called in the middle frame, but the physical play and the nastiness level jumped up a few gages.  Shots were 27-14 in favor of Greenville through 40 minutes of play with the score tied 1-1.

Greenville took their first lead of the game at 16:36 of the third period as Thomas Ebbing (9th) scored an unassisted goal after an icing called against the Railers. Just 12 seconds later, Chris Izmirlian (10th) scored on a breakaway to put the Swamp Rabbits ahead 3-1.  Garrett Milan (1st) added an empty netter at 18:16 to put the game away at 4-1.  A wild brawl broke out that continued into the Greenville bench and led to ejections to Yanick Turcotte and Alex Vanier at 19:35 as the Railers frustrations boiled over in the final minute.

Notes: Three Stars: 3rd star: Chris Izmirlian (1-0-1) 2nd star: Chris Nell (20 saves, Win) 1st star: Thomas Ebbing (GWG) …. final shots were 37-21 in favor of Greenville…. Chris Nell (9-9-2) made 20 saves on 21 shots for Greenville…. Evan Buitenhuis (5-7-3) made 33 saves on 36 shots for Worcester…. while Mitch Gillam served as the backup…. Worcester went 1-for-3 on the power play while Greenville went 0-for-2…. Kyle McKenzie (inj), David Quenneville (inj), Bo Brauer, Alex Adams, and Malcolm Gould (inj) did not dress for Worcester…. Jeff Kubiak, Ryan Hitchcock, and Matty Gaudreau are currently on recall with the Bridgeport Sound Tigers… Worcester falls to 5-10-0-1 on the road this season….Yanick Turcotte had 16 of the Railers 30 penalty minutes.

On Sunday, Jan 6 the Railers finish their three game South Carolina road trip in Greenville, SC for a 3pm battle vs. the Swamp Rabbits.  Coverage begins at 2:35pm on 98.9 Nash ICON.

On Saturday, January 12 the Railers host the Reading Royals at 7pm on a BIG GAME SATURDAY!  The first 3,000 fans will receive a GILLY GILLY bobbleheadcourtesy of BLUEROCK ENERGY!  Score the first bobblehead of the season and yell GILLY GILLY!  Tickets are as low as $15.