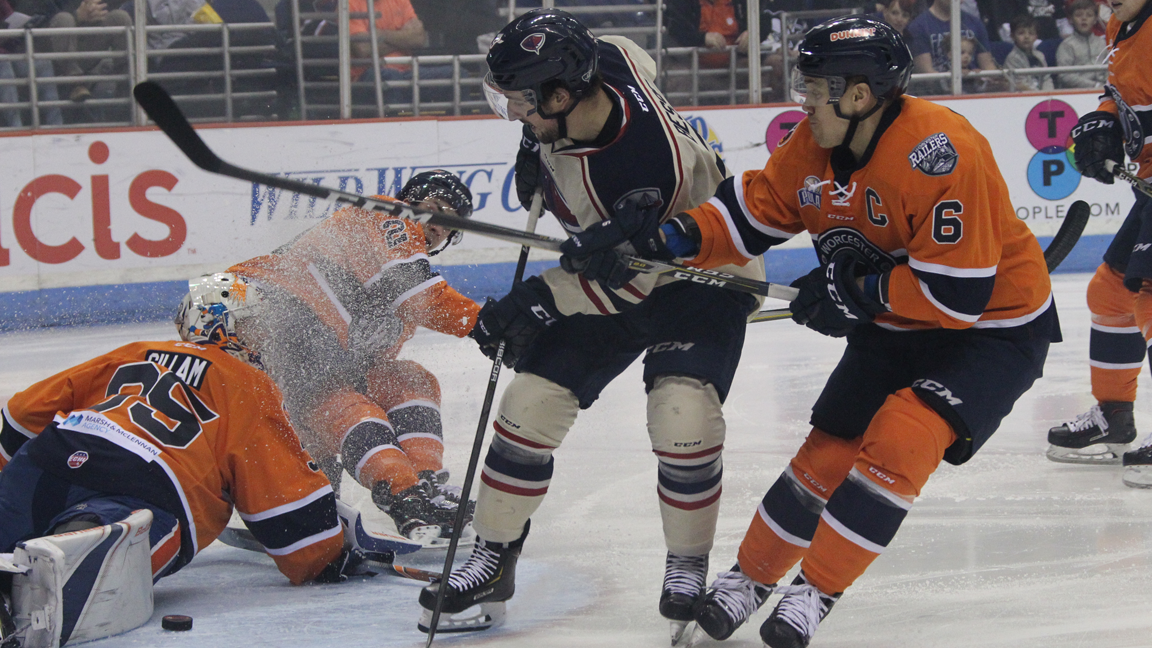 Meeting 1 of 2 vs. South Carolina this season

CHARLESTON, SC – The Worcester Railers HC (13-15-3-2, 31pts) rang in the New Year with a 4-1 loss to the host South Carolina Stingrays (19-13-1-0, 39pts) in front of 4,058 fans at the North Charleston Coliseum on Friday evening. The Railers three game South Carolina swing continues on Saturday at 7pm in Greenville vs. the Swamp Rabbits.

Mike Cornell scored the first goal of the calendar year 2019 for the Railers while Mitch Gillam made 27 saves in net for Worcester as the Railers outshot South Carolina 50-31.  Gordon Defeil made 49 saves in net for the Stingrays while Grant Besse and Andrew Cherniwchan each had a goal and an assist to lead South Carolina offensively in the home win.

Grant Besse (13th) scored on a quick back door bang-bang play at 8:08 of the first period to give South Carolina a 1-0 lead.  Mitch Gillam made several nice stops in the opening frame and made 10 total saves while Gordon Defiel made 12 first period saves for the Stingrays through 20 minutes of play.

Mike Cornell (3rd) got Worcester on the board at 8:51 of the second period after Worcester’s 5-on-3 power play came to an end and Tyler Barnes from behind the net found Cornell alone at the left circle for the quick strike by the Railers’ captain.  South Carolina couldn’t capitalize on a 5-on-3 of their own but did strike again with just 90 seconds left in the period as Andrew Cherniwchan (16th) chipped a quick shot from on top of the crease just inside the crossbar to give South Carolina a 2-1 lead.  Shots were 30-23 through 40 minutes of play in favor of Worcester but the Railers trailed 2-1.

Former Railer Vinny Muto (2nd) scored an insurance goal after a snap shot from 35 feet broke through Gillam at 16:50 to give South Carolina a 3-1 lead.  Worcester outshot South Carolina 20-3 in the third period but couldn’t score and Kevin McKernan (5th) added an empty netter at 17:54 to give the Stingrays a 4-1 home win.

Notes: Three Stars: 3rd star: Grant Besse (1-1-2) 2nd star: Andrew Cherniwchan (1-1-2) 1st star: Gordon Defiel (49 saves, Win) …. final shots were 50-31 in favor of Worcester…. Gordon Defiel (6-3-0) made 49 saves on 50 shots for South Carolina…. Mitch Gillam (8-9-1) made 27 saves on 30 shots for Worcester…. while Evan Buitenhuis served as the backup…. Worcester went 0-for-7 on the power play while South Carolina went 0-for-5…. Kyle McKenzie (inj), David Quenneville (inj), Bo Brauer, Alex Adams, and Malcolm Gould (inj) did not dress for Worcester…. Jeff Kubiak, Ryan Hitchcock, and Matty Gaudreau are currently on recall with the Bridgeport Sound Tigers…forward Bo Brauer (Notre Dame) was traded from Atlanta and met the Railers in Charleston – but did not dress…. Worcester falls to 5-9-0-1 on the road this season….Barry Almeida had a game high 10 shots on goal while Mike Cornell had eight shots… Tyler Barnes and Josh Holmstrom added assists for Worcester…. The Railers ended the Stingrays streak of 10 straight games with a power play goal….it was the first ever game played by the Railers in the state of South Carolina.

On Saturday, Jan 5 the Railers travel to Greenville, SC for a 7pm battle vs. the Swamp Rabbits.  Coverage begins at 6:35pm on 98.9 Nash ICON.

The Worcester Railers and Worcester Jr. Railers to donate $16,500 to the Ava...