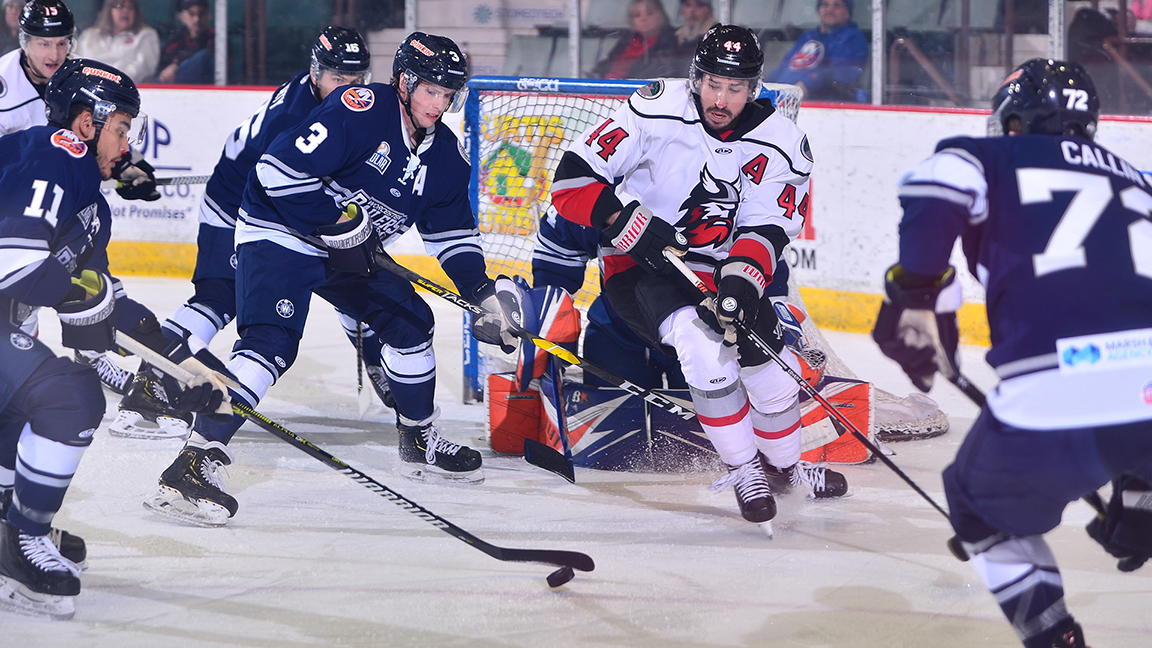 Meeting 12 of 14 vs. Adirondack this season

Midway through the first period James Phelan (3rd) split the Railers defensemen and in all alone wristed one low blocker by Evan Buitenhuis to give Adirondack a 1-0 lead at 9:56. Tyler Poulsen carried the puck into the Thunder end and sent a pass inside the right circle to Brent Beaudoin who found Brennan Feasey (1st) on the far side for his first professional goal to tie the game at 1-1 with 3:27 left in the frame. With just 1:54 left in the stanza Kelly Summers (9th) was able to hand back the lead to Adirondack this time 2-1. The Thunder took a 2-1 lead into the dressing room through 20 minutes of play as they outshot Worcester 10-7.

Barreling down the left side Shane Walsh (14th) in his usual spot was able to fire one far side past the glove of Eamon McAdam to tie the score at 2-2 just 3:32 into the second period. Adirondack had two power-plays in the stanza but Worcester was perfect on the penalty kill and took their first lead of the game when Ross Olsson (12th) received a feed from behind the cage from Billy Vizzo and Olsson wasted no time snapping it off popping the water bottle off with 2:27 to play in the frame making it a 3-2 Worcester lead. The Railers led 3-2 through 40 minutes of play with shots even at 17-17.

The Railers received goals fifteen seconds apart from one another in the opening minutes of the third period. First it was Tyler Poulsen (14th) on the power-play just 57 seconds in with a wrist shot from the top of the left circle to increase the Worcester lead to 4-2. Brent Beaudoin (1st) potted his first professional score finishing off a nice two on one with the pass coming from Shane Walsh at 1:12 to hand the Railers a 5-2 advantage. Worcester went on the powerplay at 3:53 and with just two seconds left in the power-play it would be the Thunder striking on short-handed coming courtesy of Casey Pierro Zabotel (24th) off a two on one rush cutting the Adirondack deficit down to 5-3 at 5:51. With 5:25 to play Nick Hutchinson (1st) swatted a puck out of midair to cut the Railers lead down to 5-4. The goal was reviewed for high sticking, but it would stand. Adirondack pulled McAdam with 1:47 to play in regulation but strong defense from the Railers allowed them to pull through for a 5-4 victory.

Notes: Three Stars: 3rd star: Tyler Poulsen (1-1-2) 2nd star: Kelly Summers (1-1-2) 1st star: Brent Beaudoin (1-1-2, +2, 4 shots)…. final shots were 26-23 in favor of Adirondack …. Eamon McAdam (15-19-4) made 18 saves on 23 shots for Adirondack…. Evan Buitenhuis (14-19-1) made 22 saves on 26 shots for Worcester while Ian Milosz served as the backup…. Worcester went 1-for-2 on the power play while Adirondack went 0-for-3…., JD Dudek (IR), Kyle Thomas (IR), Yanick Turcotte (IR), Tanner Pond (IR), Barry Almeida (INJ), Ryan MacKinnon (Ill) and Mike Cornell (Personal) did not dress for Worcester…. Nic Pierog, Ben Thomson, Arnaud Durandeau, and Linus Soderstrom are all with the Bridgeport Sound Tigers…. Mike Cornell and his wife Kelli had their second child Monday night a baby boy named Levi…. Justin Murray has played in 51 straight games…. Ross Olsson and Justin Murray wore “A”s…. Brennan Feasey scored his first professional goal…. Brent Beaudoin signed with Worcester earlier in the day and made his professional debut wearing number 15 while scoring a goal and adding in assist in route to being named number one star…. Billy Vizzo registered an assist for his first professional point…. Shane Walsh recorded his seventh multi-point game of the year and his fourth three-point game…. Ross Olsson and Brent Beaudoin tied for a game high with four shots on goal…. Worcester has 11 games left on the regular season seven of which are at the DCU Center…. The Railers are now 21-12-2-0 all-time vs. the Thunder and 13-6-1-0 at the Cool Insuring Arena

The Railers travel back to Portland to play the Mariners on Saturday, March 14 at 7pm before returning home on Sunday, March 15 to host the Norfolk Admirals at 3pm.  The first 2,500 fans will receive a team photo presented by Jimmy John’s. Score a SUNDAY FUNDAY ticket pack which include four tickets and four beverages (beer/soda) for just $60!