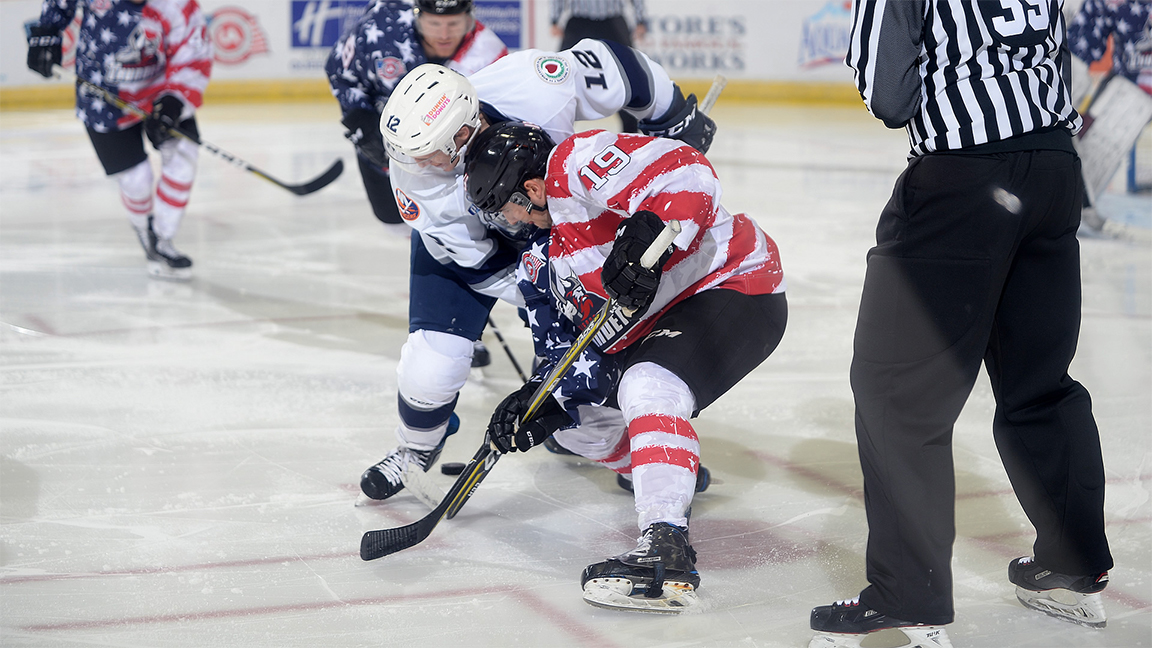 Meeting 2 of 11 vs. Adirondack this season

Railers fall late 2-1 in Glens Falls vs. the Thunder

Glens Falls, NY – The Worcester Railers HC(3-3-0-0, 6pts) ended their three-game road trip with a 2-1 loss to the Adirondack Thunder (6-2-0-0, 12pts) in front of 4,108 fansat the Cool Insuring Arena on Saturday evening. The Railers return home to the DCU Center on Friday at 7pm for a 2-3-4 Friday vs. the Thunder followed by GUNS N HOSES Night on Saturday at 7pm with a special appearance by Ray Bourque presented by Berkshire Bank.

Josh Holmstrom was the only goal scorer for Worcester while Mitch Gillam made 23 saves in net in the loss.  James Henry had a goal and an assist for the Thunder while former Railers netminder Alex Sakellaropoulos made 33 saves in net for the win as the Railers fell to 2-3-0-0 on the road this season.

Neither team scored in the first period as each team fired six shots on goal, unable to score on the power play, and each team dropped the mitts twice in the opening frame. Tommy Tsicos and Josh Holmstrom each picked up their first fighting majors of the season as the two clubs headed into first intermission scoreless.

Peter MacArthur (3rd) extended his point streak to five games with a shot from behind the goal line that banked off Mitch Gillam and into the net at 11:29 of the second period.  Worcester outshot Adirondack 16-9 in the middle frame but were unable to find the back of the net on Alex Sakellaropoulos.  Worcester trailed 1-0 after 40 minutes of play.

Josh Holmstrom (4th) tied the score at 1-1 with a loose puck battle at the side of the net and shuffled past the Thunder netminder at 10:21 of the third period assisted by Austin Block.  After a turnover in the neutral zone, James Henry (2nd) broke in down the left wing and fired a shot from on top of the left circle top shelf for the game winner at 18:46.

The Railers return home on Friday, Nov 2 vs. the Adirondack Thunder on a 2-3-4 Friday! Enjoy $2 popcorn, $3 sodas, and $4 Bud Lights in the Bud Light Lounge.  The Railers will host GUNS N HOSES NIGHT on Saturday, Nov 3 with a special appearance by Ray Bourque presented by Berkshire Bank!  Tickets as low as $15!  Doors open at 4pm for the Worcester Police vs Fire game followed by the Railers and Growlers at 7pm.