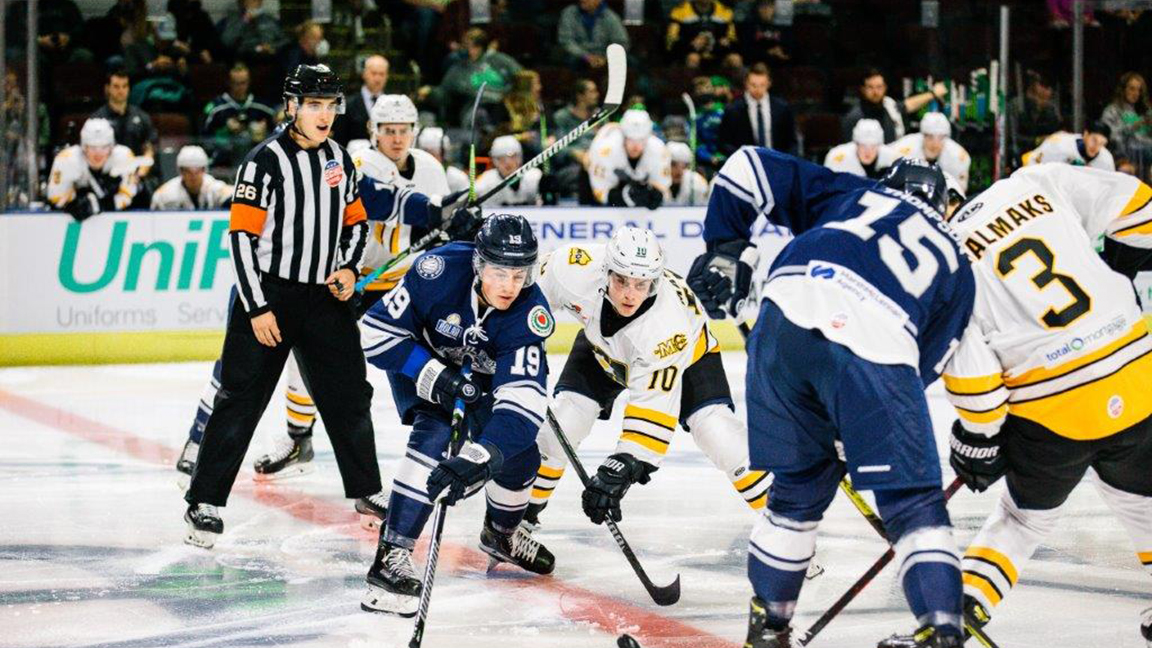 Railers Fall in Season Opener 6-3 vs. Maine Mariners
Railers fire franchise-record 54 shots in loss
By Bill Ballou
PORTLAND, Maine – The Railers did two things here Friday night they had never done before, and another thing they do all the time.
Worcester fired a franchise record 54 shots on goal, and lost for the first time ever on opening night. They fell to the Maine Mariners for the 12th time in 14 games at Cross Insurance Arena, this time by 6-3.
“I’m not at all discouraged,” coach David Cunniff said. “We’re not going to be anybody’s whipping boy this season.”
The teams meet again at 7:35 Saturday night at the DCU Center. Friday night was the first of 14 meetings this season.
Eduards Tralmaks, a Latvian from the University of Maine, paced the Mariners with a three-goal effort. Pascal Laberge, Lewis Zerter-Gossage and Mathew Santos had the other Maine goals.
Nick Albano, Jacob Hayhurst and Mike Cornell scored for the Railers.
Jeremy Brodeur stopped 51 of Worcester’s 54 shots while Justin Kapelmastermade 28 saves for the Railers.
“I think we let their goalie see the pucks,” Cunniff said. “They have good goaltending and we allowed him to see the first shot so he was able to control all the rebounds. We went to the net consistently and got second and third chances but the percentages just weren’t there for us, unfortunately, so we didn’t get the breaks.
“That said, I thought our guys competed, and I thought they went to the net after the puck arrived. Our habits are just not there yet and (the Mariners) were opportunistic.”
Worcester should have had something like a 5-1 lead after one period but trailed, 2-1, even though it outshot the Mariners by 26-11. Maine scored before and after Albano got the Railers’ first goal of the year at 16.18.
Tralmaks popped a rebound past Kapelmaster at 13:50 to make it 1-0, then Albano responded with a 40-foot wrist shot at 16:18. Worcester was on a power play, a 4 on 3, and it was merely the second 4 on 3 goal in franchise history.
It looked like the Railers would take a tie into the dressing room but Pascal Laberge made Worcester pay for a turnover behind the net and scored for Maine at 19:18.
Zerter-Gossage scored from the right circle with Maine on a power play at 14:49 of the second period to give the Mariners a 3-1 lead, which is the way the third period started.
It did not take long for that to change as Hayhurst finished a long rush down the middle by snapping a high 30-footer home at 0:51, followed by Cornell from in close at 1:16, Anthony Repaci picking up his second assist of the night.
“I thought the game was ours then,” Cunniff said.
But it was not. Tralmaks scored at 7:34 and 12:35 as Maine regained the lead and Santos finished it off with a goal at 17:50.
MAKING TRACKS -Albano is the 13th player to score in his Worcester debut, the fifth to score in his pro debut. … Connor Doherty was not on the scoresheet but finished at plus-1 for Maine … Attendance was 4,541. … Worcester has had 50 or more shots in two games, both on the road, and lost both by three goals.
The Worcester Railers look forward to welcoming fans back to the DCU Center for the Home Opener on Saturday, Oct. 23 at 7:35 p.m. presented by Table Talk Pies. The general public is invited to celebrate the return of Worcester Railers hockey with a complimentary Block Party presented by Off The Rails from 5-7:30 p.m. on Commercial Street behind the DCU Center. The world’s top professional eater, Joey Chestnut, will compete against fans and local celebrities in a pie-eating contest on the ice during the first intermission.
#RailersHC
https://railershc.com/wp-content/uploads/2021/10/ZRP_0298.jpg 648 1152 admin /_media/2021-22/logo.png admin2021-10-22 22:52:132021-10-22 22:52:14Railers Fall in Season Opener 6-3 vs. Maine Mariners