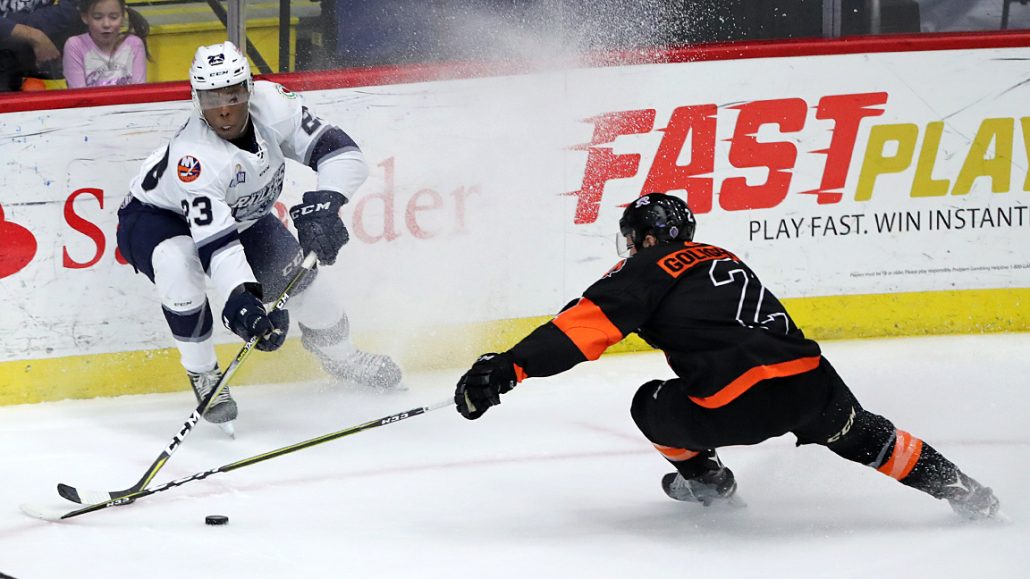 Meeting 5 of 14 vs. Reading this season

Woody Hudson and Jeff Kubiak scored for Worcester but the Royals were able to get goals from six different skaters to snap out of a five-game losing skid.  John Muse made 37 saves in net for Reading in his return from the AHL while Eamon McAdam allowed five goals in the first two periods before Mitch Gillam came in for the final frame.

The Royals screamed out to a 3-0 lead after getting a pair of goals just seven seconds apart by Mike Huntebrinker (8th) at 4:28 and Jimmy DeVito (7th) at 4:35 as the Railers were down early.  Chris McCarthy (8th) made it 3-0 at 11:06 after a quick pass from behind the net by Matt Willows and McCarthy zipped it home past Eamon McAdam from in tight.  The Railers got on the board at 17:03 after Ashton Rome threw a check along the left side wall and snuck the puck over to Woody Hudson (8th) who snapped a quick shot from the left slot to get Worcester back within two.  Shots were 14-12 Royals through 20 minutes.

Reading outscored Worcester 2-1 in the middle frame to take a 5-2 lead into the second intermission. Former Holy Cross Crusader Adam Schmidt (6th) found the back of the net on a shorthanded rush at 2:07.  Worcester got back within two goals as Jeff Kubiak (3rd) crashed the net and took a nice pass from Wade Murphy at 13:25. Reading answered right back just 30 seconds later as Nolan Zajac (7th) lit the lamp at 13:55 to close out the scoring in the second period.  Worcester trailed 5-2 after 40 minutes despite holding a 25-23 shot advantage through two periods of play.

With Mitch Gillam in net for Worcester, Reading would score on final time at 8:03 as Matt Willows buried a shot from the left slot on the rush to put the game away at 6-2.  Worcester fired 14 shots on goal in the third period but came up empty.

Notes: Three Stars: 3rd star: Jimmy DeVito (Goal, +3) 2nd star: Chris McCarthy (Goal and Assist) 1st star: Matt Willows (Goal, 2 assists) …Final shots were 39-30 in favor of Worcester… John Muse (7-3-1) made 37 saves on 39shots for Reading…. Eamon McAdam (7-6-4) made 18 saves on 23 shots for Worcester in the first two periods while Mitch Gillam made 6 saves on 7 shots in the third…. Worcester went 0-for-3 on the power play while Reading went 1-for-3…. TJ Syner, Matty Gaudreau (inj), and Josh Monk (inj) did not dress for Worcester….before the game, forward Chris Langkow was signed by the Hartford Wolfpack (AHL) to a PTO…. The six goals allowed matched a season high for the Railers…Kellen Jones, Wade Murphy, Ashton Rome, and Barry Almeida all added assists for Worcester…Woody Hudson had four goals in his last six games for the Railers…Kellen Jones had a game high seven shots on goal.

NEXT HOME GAME:  The Railers host the Manchester Monarchs on Saturday, Dec 30 at 7:05pm on a BIG GAME SATURDAY! The first 3,000 fans will receive a Railers scarf courtesy of UniBank on HOME FOR THE HOLIDAYS NIGHT.

Railers have the right stuff in 5-3 win in Glens FallsSCORE A RAILERS 6 PACK!
Scroll to top