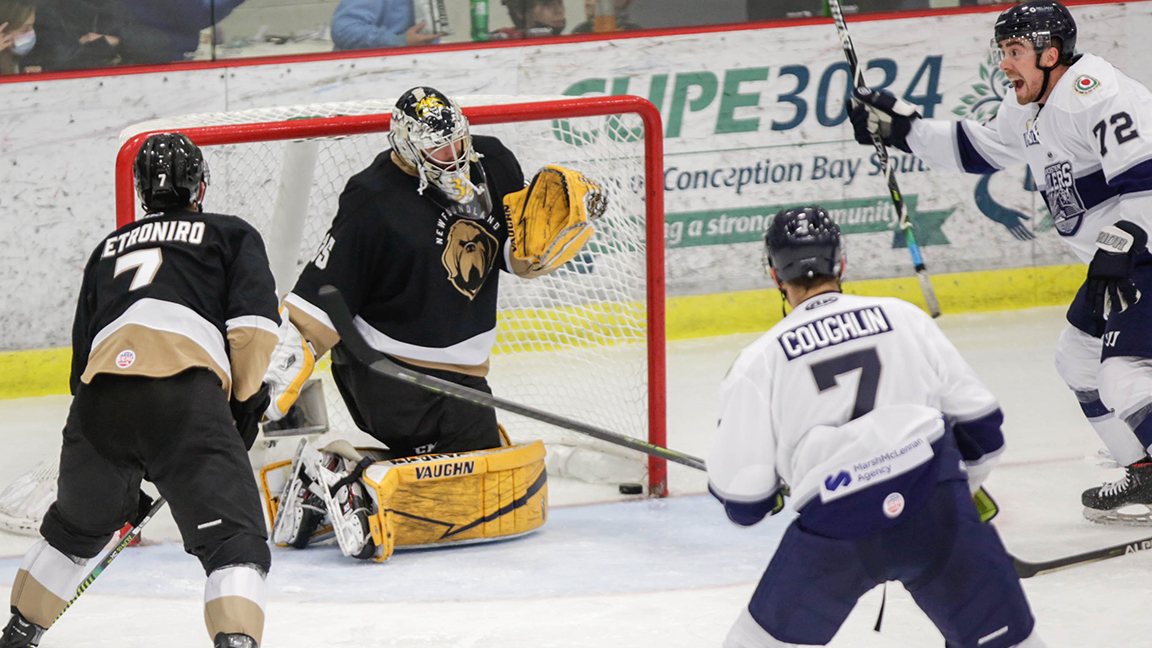 Worcester Railers HC at Newfoundland Growlers
November 13, 2021
Conception Bay South Arena
Meeting 2 of 9 vs. Newfoundland this season
Railers are 1-0-0-1 vs. the Growlers this season
Railers Explode in the Third Period to beat Growlers 5-2
Three Railers score their first goals of the season
Conception Bay South, NL – The Worcester Railers HC (2-4-0-1, 5pts) picked up their second victory of the season on Saturday night against the Newfoundland Growlers (7-2-0-0, 14pts), winning 5-2 in front of 1,168 fans at the Conception Bay South Arena. The Railers face off against the Newfoundland Growlers on Sunday, November 14that 2:30pm.
Worcester trailed 1-0 after 20 minutes of play, but stormed back in the second as Blake Christensen (1-0-1) and Jacob Hayhurst (1-0-1) each scored to put Worcester up 2-1. Newfoundland tied the game 2-2 early in the third, but Ross Olsson (1-1-2), Drew Callin (1-2-3) and Liam Coughlin (1-1-2) all recorded their first goals of the season as the Railers would go on to win the game 5-2. Keith Petruzzelli made 35 saves in net for the Growlers, while Ken Appleby made 30 saves for Worcester to pick up his first victory of the season.
Eight minutes into the first period, Matteo Pietroniro (2nd)  picked up the rebound of a shot from the point and deked around the left side of Ken Appleby to give the Growlers the 1-0 lead. The Railers were aggressive throughout the period as they drew two penalties and led in shots 14-8, but were unable to put anything past Keith Petruzzelli. The first period would come to a 1-0 close with Newfoundland out in front.
Despite trailing, Worcester kept their foot on the gas pedal in the second and were finally able to break through with a pair of goals. First, it was Blake Christensen (2nd) who raced into the slot and ripped one past Petruzzelli just 8:26 into the period. The Railers then capitalized on their third powerplay of the night, as Grant Jozefek would find Jacob Hayhurst (3rd) backdoor to give Worcester the 2-1 lead with 8:59 to go in the second. Neither team would score for the rest of the frame, as the second came to a 2-1 close. Worcester notched another 14 shots and continued to outshoot Newfoundland 28-21.
Similar to Friday night, Newfoundland tied the game 2-2 early in the third period thanks to a goal from Trent Bourque just 2:38 in. Worcester would bounce back with 11:18 to go as Ross Olsson (1st) recorded the game winner on a three-on-one break, putting Worcester up 3-2. Three minutes later, Drew Callin (1st) and Liam Coughlin (1st) each scored fifteen seconds apart to extend the Railers lead, and give the game its final score of 5-2. Worcester outshot Newfoundland 40-32 at the end of the game, as Ken Appleby made 30 saves to pick up his first victory in a Railers jersey.
Notes: Three Stars: 3rd star: Matteo Pietroniro (1-0-1, 3 shots) 2nd star: Ross Olsson (1-1-2, +1) 1st star: Drew Callin (1-2-3, +2, 9 shots)… Final shots were 40-32 in favor of Worcester… Keith Petruzzelli (4-1-0) made 35 saves on 40 shots for Newfoundland… Ken Appleby (1-2-1) made 30 saves on 32 shots for Worcester while Matt Jenkins served as the EBUG… Worcester went 1-for-6 on the power play while Newfoundland went 0-for-4… Nolan Vesey (DNP), Jordan LaVallee-Smotherman (DNP), Karl Boudrias (DNP), JD Dudek (DNP), Tyler Poulsen (DNP), Brett Boudoin (IR) did not dress for Worcester… Colten Ellis, Nick Albano, and Nic Pierog are all up with the Springfield Thunderbirds… Jacob Hayhurst scored in back-to-back games, and now has points in five of seven games for Worcester this season… Grant Jozefek tallied his second professional point in his second straight game with an assist… Ross Olsson, Drew Callin, and Liam Coughlin each scored their first goals of the season… Drew Callin led the Railers with 9 shots… Five goals is the most the Railers have scored in a game all season… Worcester has 65 games left on the regular season 33 of which are at the DCU Center… The Railers are now 5-12-1-1 all-time vs. the Growlers and 2-6-1-1 at Newfoundland.
https://railershc.com/wp-content/uploads/2021/11/game-image-11.13.jpg 648 1152 admin /_media/2021-22/logo.png admin2021-11-13 21:08:212021-11-14 10:59:39Railers Explode in the Third Period to beat Growlers 5-2