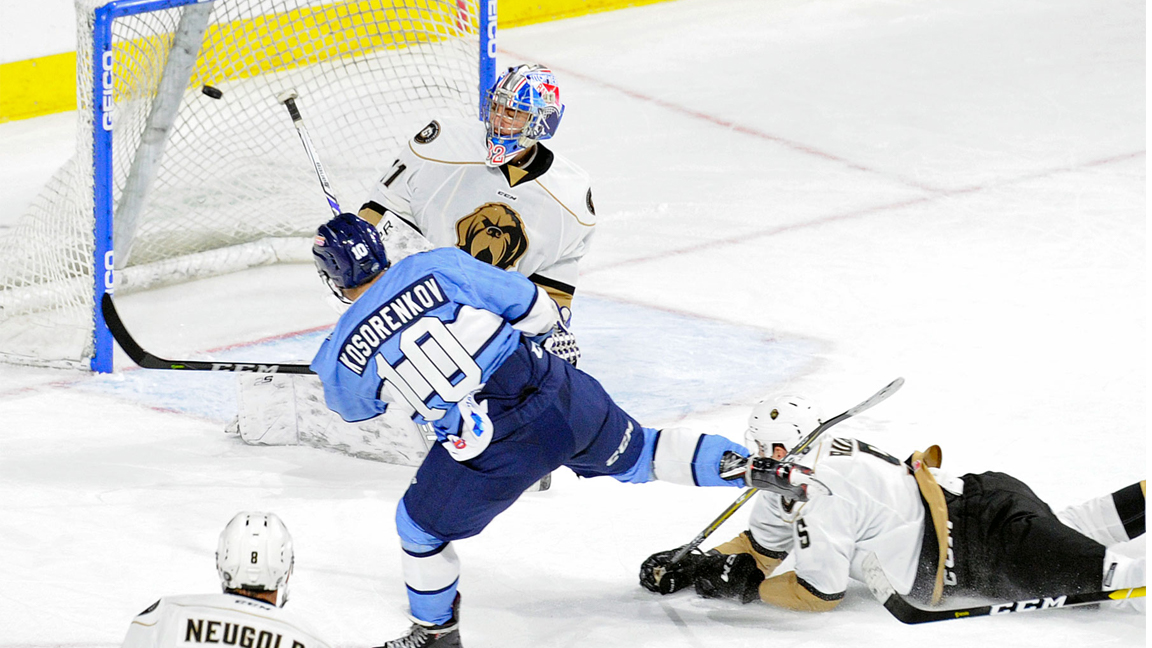 Meeting 1 of 8 vs. Newfoundland this season

Worcester, MA – The Worcester Railers HC(3-5-0-0, 6pts) dropped their third straight game with a 5-2 loss to the visiting Newfoundland Growlers (7-5-0-0, 14pts) in front of 4,877 fans at the DCU Center on Saturday evening. The Railers travel to St. John’s, NFLD to battle the Growlers for a pair of games on Tuesday and Wednesday.

The Growlers charged out to a 4-0 lead before Ivan Kosorenkov and Tyler Barnes scored in the third period for Worcester but it wasn’t enough as the Railers dropped their second straight game at the DCU Center.  Matt Bradley scored twice for Newfoundland and Mario Culina made 33 saves in his first professional start as Newfoundland ended their eight-game road trip 5-3-0-0.

Newfoundland charged out to a 2-0 first period lead after a power play goal by Stefan LeBlanc (1st) at 10:29 and an even strength goal by Brady Ferguson (6th) at 14:31.  Shots were 10-8 in favor of the Growlers through 20 minutes of play.

The Growlers would tack on two more goals in the second period as Giorgio Estephan (8th) struck on the power play with a wicked shot from the right circle at 7:56 and Matt Bradley (3rd) struck at 15:25 to put the Railers down 4-0. Shots were 20-19 in favor of Newfoundland through 40 minutes of play.

Worcester would score twice in a 27 second span late in the third period to cut the score to 4-2 as Ivan Kosorenkov (1st) scored his first professional goal at 15:59 and Tyler Barnes (2nd) scored after the first officials video replay at the DCU Center at 16:26.  The excitement was short lived as Matt Bradley (4th) potted one into an empty net at 17:29 as the Growlers pulled away for a 5-2 rod victory.

The Railers head to St. John’s, NFLD for a pair of games north of the border on Tuesday and Wednesday nights with 5:30pm start times.  Worcester returns home on Friday on COUNTRY NIGHT presented by Nash ICON.  The first 1,000 fans will receive a Railers bandana presented by Nash ICON and Jack’s Abby along with a live performance by country artist Mychael David.

Railers on the Road: Newfoundland Edition!
Scroll to top