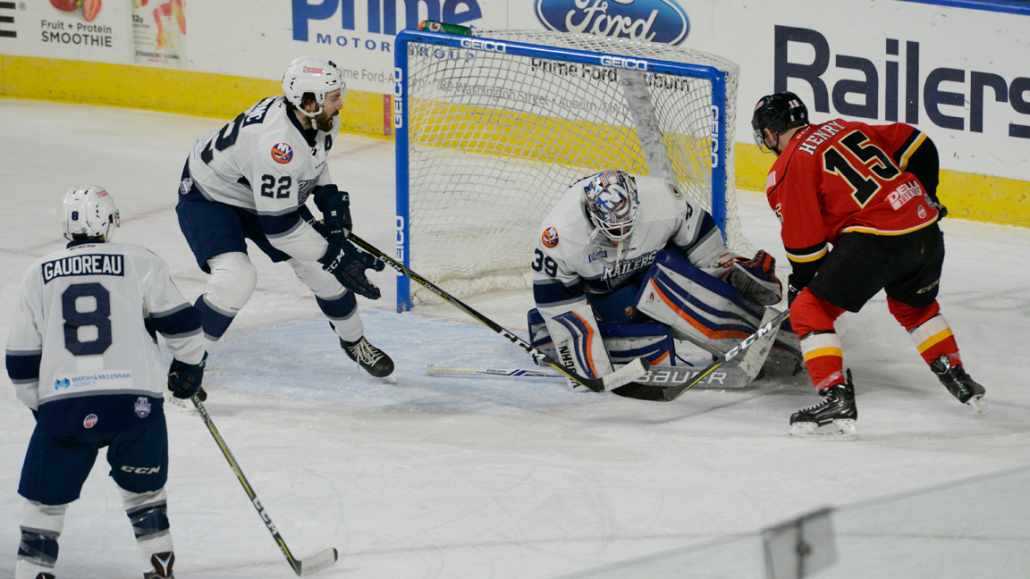 Game 3 of the Best of Seven North Division Semifinals

Worcester, MA – The Worcester Railers HC (1-2) dropped Game 3 to fall behind 1-2 in the best of seven North Division Semifinals after a 3-1 loss to the visiting Adirondack Thunder (2-1) in front of 4,216 fans at the DCU Center on Sunday evening. The series now shifts to Glens Falls, NY for games 4 and 5 beginning on Wednesday at 7pm.

Jeff Kubiak scored for the Railers while Eamon McAdam made 33 saves in his first professional playoff game but Brian Ward had a goal and assist for the Thunder as the Railers continue to have a tough time scoring on netminder MacKenzie Blackwood.

The Thunder outshot the Railers 18-11 in the first period and scored the only goal as Brian Ward (2nd) banged home a loose rebound after a goal mouth scramble at 10:51 past Eamon McAdam to give Adirondack a 1-0 lead.

Adirondack went ahead 2-0 as Mike Szmatula (1st) sent a quick shot from 20 feet past the blocker of Mackenzie Blackwood after a Railers turnover in their own zone at 2:48 of the second period.  Worcester got on the board about four minutes later as Jeff Kubiak (1st) struck on the rush with a high shot assisted by TJ Syner and Connor Doherty at 6:23. Eamon McAdam made several nice saves to keep the Railers close headed into the second intermission as the Thunder held a 28-20 shot advantage.

The Railers brought the pressure late in the third period and had several chances to tie the score, especially in the final two minutes with the goaltender pulled but had a tough time against goaltender MacKenzie Blackwood. Ryan Schmelzer (1st) sealed the deal for Adirondack with an empty net tally with 13 seconds left to give the Thunder a 3-1 win and a 2-1 series lead.

Notes: Three Stars: 3rd star: MacKenzie Blackwood (28 saves, Win) 2nd star: Jeff Kubiak (goal) 1st star: Brian Ward (Goal, assist) …Final shots were 36-29 in favor of Adirondack…Mackenzie Blackwood (2-1-0-0) made 28 saves on 29 shots for Adirondack… Olivier Mantha was the backup for the Thunder…. Eamon McAdam (0-1-0-0) made 33 saves on 35 shots in net for Worcester in his first professional playoff start …Mitch Gillam was the backup goaltender for the Railers…. Worcester went 0-for-3 on the power play while Adirondack went 1-for-2…Chris Langkow (inj), Frankie DiChiara, and Mike Cornell (inj) did not dress for Worcester…. Kellen Jones, Patrick Cullity, and Josh Holmstrom are currently on recall with the Bridgeport Sound Tigers…. Kyle McKenzie was back in the lineup for the Railers……Worcester is now 0-13 on the power play in the playoffs and have scored just two goals in nine periods vs. Mackenzie Blackwood….Jeff Kubiak had six shots on goal for the Railers.

The Worcester Railers (4thseed) trail the series 1-2 against the Adirondack Thunder (1stseed) in the first round of the Kelly Cup playoffs presented by Energy Monster.  The first round is a best of seven series and will follow a 1-2-2-1-1 format.  Complete schedule below:

Tickets are on sale now through the DCU Center Box Office, online via ticketmaster.com, or by calling 508-365-1750. Worcester Railers HC members may purchase their season tickets for the playoffs by clicking HERE.

The Railers Tavern, located behind the DCU Center provides hockey fans with a great pregame and postgame atmosphere all season long. Watch all road games broadcast live at Railers Tavern or watch on ECHLTV.com for a small fee. Listen to all Worcester Railers playoff games live on 98.9 Nash ICON with coverage beginning 30 minutes before puck drop with Eric Lindquist and Tom Matthews. Full season memberships for the 2018-19 season, mini plans, and group tickets are on sale now by calling the Railers front office at 508-365-1750 or by visiting www.RailersHC.com.