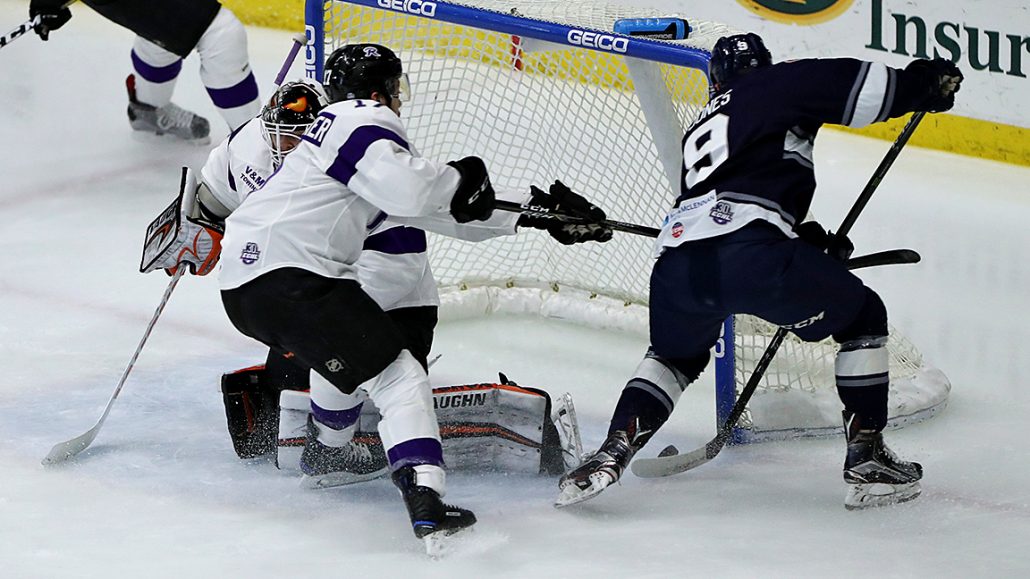 Meeting 9 of 14 vs. Reading this season

Barry Almeida added two points (1-1-2), Kellen Jones recorded his eighth goal of the season, and Pennsylvania native Eamon McAdam made 29 saves in net but Reading got a goal midway through the third period to break a 2-2 tie before adding an empty netter. The Railers finished the three-game set in Reading with a 1-2-0-0 record vs. the Royals.

Worcester struck first as Kellen Jones (8th) tapped in a rebound from the crease past goaltender John Muse assisted by Chris Langkow and Barry Almeida at 7:11 of the first period.  Reading would answer back at 16:49 as Nolan Zajac (8th) fired a one-timer past Eamon McAdam after a nice feed from behind the net by Matt Willows.  No penalties were called in the opening frame as Reading held a 13-8 shot advantage.

The Railers went ahead 2-1 on their first shot of the second period as Barry Almeida (9th) stole the puck at center ice and broke in on John Muse and scored with a quick shot through the pads at 7:00.  The Royals would tie the game again at 15:38 after a turnover behind the Railers net and a quick pass in front to Chris McCarthy (12th).  Each team had a power play in the second period as Reading held a 24-13 shot advantage through two periods of play but the score was tied 2-2.

Reading would grab their first lead of the game at 10:41 as Alex Krushelnyski (11th) sent a snap shot through a screen from the left circle to give the Royals the 3-2 lead.  Worcester would send a flurry of activity on the net in the final two minutes with the extra attacker but Matt Willows (13th) would put the game away with an empty netter at 19:52 to give Reading the 4-2 home victory.

Notes: Three Stars: 3rd star: Barry Almeida (1-1-2) 2nd star: Chris McCarthy (1-0-1) 1st star: Alex Krushelnyski (GWG) …Final shots were 33-21 in favor of Reading… John Muse (12-3-1) made 19 saves on 21 shots for Reading…. Eamon McAdam (8-8-5) made 29 saves on 32 shots for Worcester… Mitch Gillam was the backup goalie …. Worcester went 0-for-1 on the power play while Reading went 0-for-1… the Railers are now 0-for-22 vs. the Royals on the power play this season…. Matty Gaudreau (inj), Josh Monk (inj), TJ Syner, and Sean Gammage did not dress for Worcester…. Chris Langkow returned to the lineup after playing five games for the Hartford Wolf Pack and added an assist for Worcester… Mike Cornell (BRI) is currently in the AHL…. Worcester has scored just 16 goals in nine games vs. the Royals this season….Connor Doherty was +2 for the Railers…

The Railers six game road trip continues in Manchester on Friday at 7pm vs. the first place Monarchs.