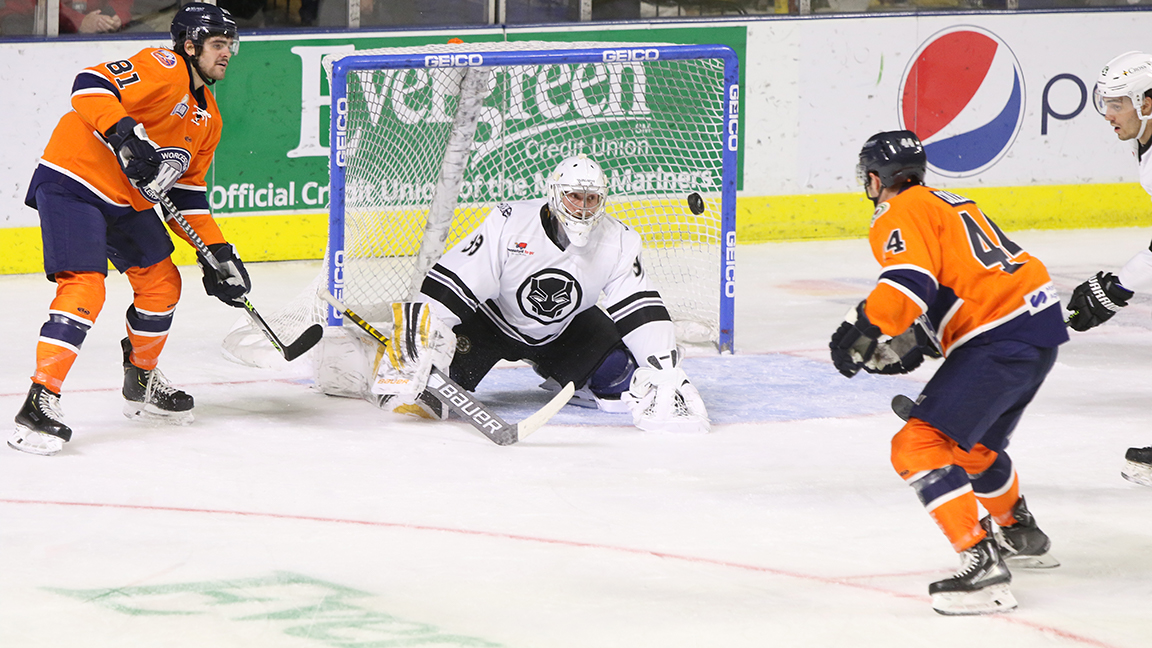 Meeting 6 of 14 vs. Maine this season

Portland, ME – The Worcester Railers HC (7-10-0-1, 15pts) lost in the sixth meeting of the “VIP Rivalry Cup,” falling to the Maine Mariners (7-8-3-1, 18pts) by the final score of 3-2 at the Cross Insurance Arena on Friday night. The Railers are back at the DCU Center against the Maine Mariners on Saturday, December 11th at 7:05 for the annual “Teddy Bear Toss” game presented by Fidelity Bank.

For the fourth time in six meetings, the Mariners scored first as Nick Master (3-0-3) put Maine ahead 1-0 just seven minutes into the first. Nick Master struck again in the second with just 3:59 to go in the period as he deked his way around Poreda and put the Mariners up 2-0. Master would cap off the hat trick with a goal midway through the third to make it a 3-0 game. Worcester made things interesting late in the third with a goal from Will Cullen (1-0-1) with 4:15 remaining, and Brent Beaudoin (1-0-1) with 1:34 to go, but couldn’t score the equalizer. The game would end as Maine won by the final score of 3-2.

Nick Master (3rd) was in the right place at the right time as he scored the game’s first goal. He batted home the rebound of a Brendan St-Louis point blast past Jimmy Poreda to give Maine the 1-0 lead with 13:13 to go in the first period. The ice at Cross Insurance Arena soon resembled a yard sale. With 5:19 to go in the period, Charlie Spetz (1stFM) dropped the gloves and took on Cam Askew, as Askew had delivered a late poke at Poreda after the whistle. Carlos Fornaris (1st FM) and Jake Bricknell also broke into a fight 2:17 later, and would head off to the locker rooms for the remainder of the period. Neither team would score again in the period, as the frame came to a close with Maine still ahead 1-0. Shots were 16-9 in favor of Maine after the first 20 minutes.

It took 16:01 for the first goal of the second period to be scored. Callum Booth made a save which enabled Maine to come back the other way with speed. Nick Master (4th) was able to carve around Poreda from the left side to give Maine their second goal of the game, putting the Mariners up 2-0. Neither team scored again in the period, as the score was 2-0 after 40. Shots were in favor of Maine 14-12 for the period, and 30-21 for the game.

In the third, Nick Master (5th) finished off the hat trick with 12:08 remaining as he tapped home a loose puck on the near side to put Maine up 3-0. With 4:15 to go in the game, Liam Coughlin picked up a loose puck in the offensive end, skated atop the blueline, and found Will Cullen (1st) down low who was able to finally get one past Booth to give Worcester their first goal of the game. Now within two, Worcester pulled Poreda to try to pull off the comeback. The Railers scored their second goal of the game with just 1:34 to go. Brent Beaudoin (2nd) batted at a loose puck in front to get Worcester within one and make it a 3-2 game. The goal would be confirmed after a lengthy review. The Railers thought they scored their third goal of the period with just 10 seconds remaining, but video review determined the puck did not go in, and the game would end with the final score of 3-2. Shots were in favor of Worcester 16-13 in the third, and 43-37 in favor of Maine for the game.

Three Stars: 3rd Star: Callum Booth (35 saves, 2GA, .946 SV%), 2nd Star: Westin Michaud (0-3-3, +3, 3 shots), 1st Star: Nick Master (3-0-3, +3, 3 shots)… Final shots were 43-37 in favor of Maine… Callum Booth (1-1-1) made 35 saves on 37 shots for Maine… Jimmy Poreda (0-1-0) made 40 saves on 43 shots for Worcester, while Brian Wilson served as the EBUG… Worcester went 0-for-2 on the power play while Maine went 0-for-5… Myles McGurty (INJ), Ken Appleby (CEL) did not dress… Mike Cornell, Connor McCarthy, Felix Bibeau, Paul Thompson, and Collin Adams are all still on recall with the Bridgeport Islanders… Blake Christensen is still on recall with the Springfield Thunderbirds… Colten Ellis was recalled by Springfield Thursday… Drew Callin signed a PTO with the Springfield Thunderbirds Thursday and scored in his AHL debut Friday night… Nick Albano signed another PTO with the Springfield Thunderbirds Thursday… Robert Roche made his ECHL debut… Ryan Cloonan signed an SPC Friday… Will Cullen scored his first professional goal… … Ross Olsson led the Railers in shots with 7… Worcester has 54 games left on the regular season 27 of which are at the DCU center.  The Railers are now 11-13-4-3 all-time vs. the Mariners and 2-10-2-2 at Cross Insurance Arena against Maine.

Anthony Repaci Nets Overtime Winner in a 7-6 Thriller on the Annual School Day...