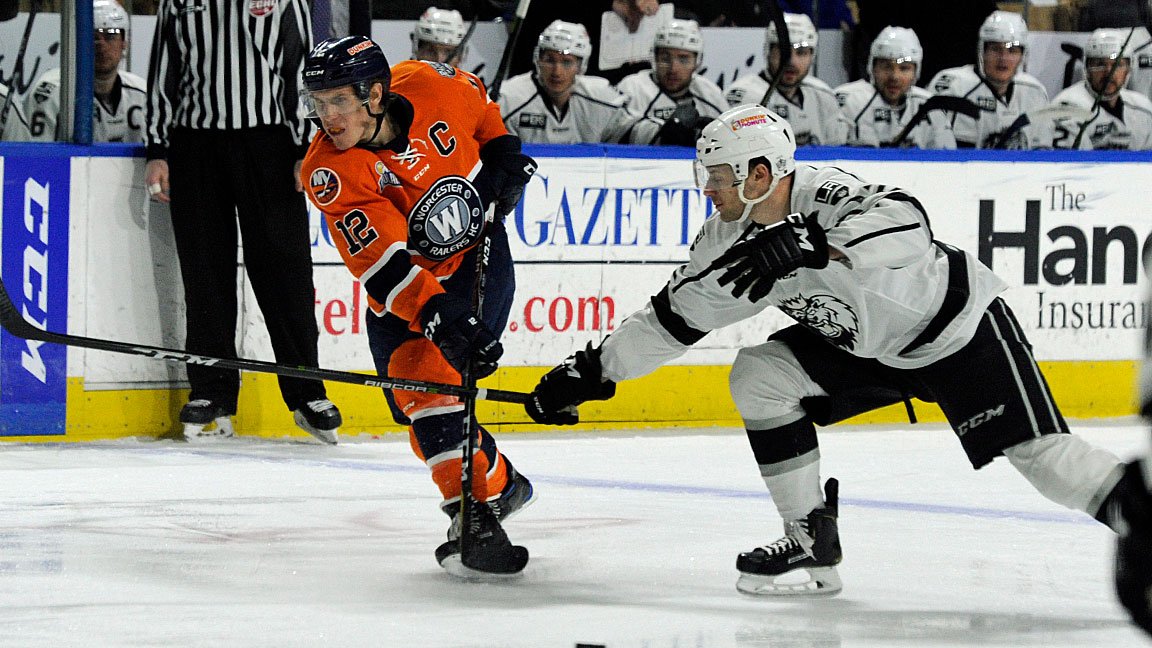 Meeting 10 of 12 vs. Manchester this season

Worcester, MA – The Worcester Railers HC (30-24-5-4, 69pts) tried to erase an early four goal deficit but ran out of steam at the end in a 7-4 loss to the visiting Manchester Monarchs (33-26-2-2,70pts) in front of 3,143 fans at the DCU Center on Sunday afternoon. With the loss, the Railers now trail the 4th place Manchester Monarchs by one point in the North Division with nine games remaining. The Railers are back in action on a 2-3-4 Friday at the DCU Center on Friday at 7pm vs. the Maine Mariners on Classic Rock Night presented by 100 FM The Pike.

Ryan MacKinnon, Dylan Willick, Barry Almeida, and David Quenneville (1-1-2) all scored for Worcester while Mitch Gillam made nine saves in net on 13 shots before getting replaced by Blake Wajtala. Nic Pierog scored four goals for Manchester while Charles Williams made 22 saves in net as Worcester fell to 16-10-4-1 on home ice this season.  The Railers trailed 4-0 after the first period and trailed 5-1 midway through the second period before getting within a goal early in the third period.

Ryan MacKinnon (6th) would get Worcester on the board with a power play goal on a nice rush down the right-wing side before sliding a low shot through netminder Charles Williams at 5:04.  Manchester would regain their four goal lead as Nic Pierog (30th) notched a hat trick at 12:42.  But the Railers would counter with a pair of goals in the final six minutes of the middle frame as Matty Gaudreau (11th) slammed home a Josh Holmstrom centering feed at 14:24 and Barry Almeida (22nd) ripped a shot top shelf to end a 3-on-2 rush at 19:27 to cut the Monarchs lead to 5-3. Shots were 22-21 in favor of Manchester through 40 minutes of play.

David Quenneville (5th) got the Railers within a goal with a seeing eye shot from the right-wing wall at 3:04 of the third period. Worcester would have several chances to tie the score the rest of the way, but the Monarchs added two empty net goals by Chris Carlisle (3rd) at 19:29 and Nic Pierog (31st) at 19:53 to give Manchester the 7-4 road victory.

Notes: Three Stars: 3rd star: Ryan MacKinnon (1-0-1) 2nd star: Josh Holmstrom (0-2-2) 1st star: Nic Pierog (4-0-4) …. final shots were 30-26 in favor of Manchester…Charles Williams (20-11-3) made 22 saves on 26 shots for Manchester… Mitch Gillam made 9 saves on 13 shots for Worcester before getting replaced for Blake Wojtala (1-2-0) at 16:27 of the first period…. Worcester went 1-for-4 on the power play while Manchester went 0-for-2…. Kyle McKenzie (inj), Tommy Panico (inj), Alex Vanier (inj), Evan Buitenhuis (inj), Matt Schmalz, Charlie Michalowski, and Ivan Chukarov did not dress for Worcester….Mike Cornell (BRI) and Nick Sorkin (BNG) are currently in the AHL….Holy Cross Alum Spencer Trapp made his pro debut on the blueline for Worcester and wore #55 and added an assist… the Railers are now 16-10-4-1 on home ice this season…Ryan Hitchcock has 35 points (15-20-35) in his last 26 games…. the Railers have 9 games remaining (5 home, 4 road)… Worcester now have 46 fighting majors this season – they had 45 last season….David Quenneville (2), Ryan Hitchcock, Tyler Barnes, David Quenneville, and Spencer Trapp all picked up assists for Worcester….Ryan Hitchcock had a game high six shots on goal…Tyler Barnes (3-3-6), Barry Almeida (3-2-5), David Quenneville (1-4-5), and Ryan Hitchcock (1-4-5) all extended their point streaks to three games….Worcester has not allowed a power play goal in seven straight games (12-12).

What’s on tap – Back home on Friday!

On Friday, March 22 the Railers host the Maine Mariners at 7pm on a 2-3-4 Friday and Classic Rock Night presented by 100 FM The Pike! Score$2 popcorn, $3 soda, and $4 bud lights inside the Bud Light Lounge!

The Railers Tavern located behind the DCU Center provides hockey fans with a great pregame and postgame atmosphere all season long. Watch all road games broadcast live at Railers Tavern or watch on ECHLTV.com for a small fee. Listen to all Railers games live on 98.9 Nash ICONwith coverage beginning 30 minutes before puck drop with Eric Lindquist and Tom Matthews. Full season memberships, mini plans, and group tickets are on sale now by calling the Railers front office at 508-365-1750 or by visiting www.RailersHC.com.

THE PLAYOFF PUSH IS ON!
Scroll to top