Eric Lindquist checking back in!  Hope everyone survived the holidays / New Year celebrations…. I am glad to be back full steam ahead getting ready for hockey THIS October at the DCU Center!

There is a lot going on over the next few months so let’s get you all caught up on all things Worcester Railers:

Just a reminder that the Select A Seat Event will be held on February 18 at the DCU Center.  Make sure to check your emails (email was sent out on Jan 6) for the brief questionnaire to reserve your seats a chance to WIN Patriots playoff tickets!  One member will win two tickets to the Patriots first playoff game on Jan 14!

The Worcester Railers may have the coolest new wheels in town!  The #RailersRaptor made its debut on Jan 5 at the DCU Center and will be heading up to the ECHL All-Star Classic on Jan 18-19.  The #RailersRaptor will be cruising around town over the next few months….so be on the lookout! 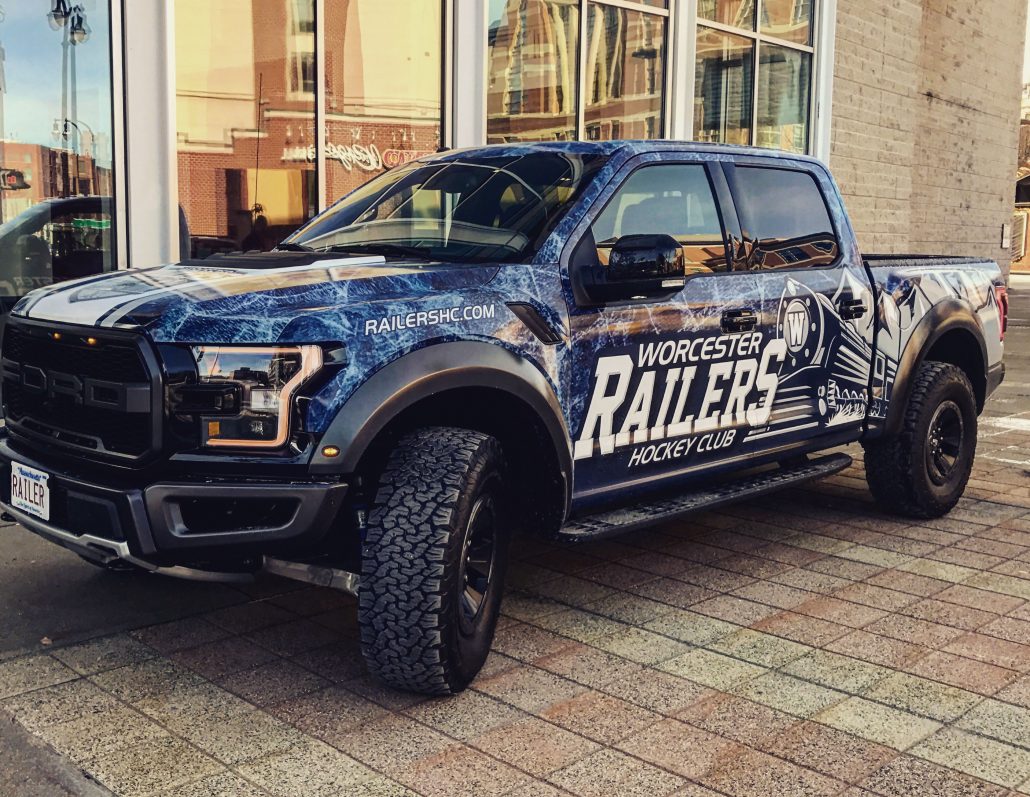 Worcester Railers owner Cliff Rucker, president Mike Myers, community development coordinator Jillian Witkowski, and TRAX are all heading up north for the 2017 ECHL All-Star Classic in Glens Falls, NY on Jan 17 and 18. The Railers look to become an official ECHL team after the Board of Governors meeting on Jan 18! – we will have you covered here on RailersHC.com!

Yanni Gourde, Matt Taormina, and Troy Grosenick were all named AHL All-Stars for the game in Lehigh Valley on Jan 29-30.  Matt Nieto was put on waivers by the SJ Sharks and was claimed by the Colorado Avalanche on Jan 5.  Ashton Rome has four points (1-3-4) in six games with the Manchester Monarchs since his return from Europe.

The Allen Americans have points in eight straight games (7-0-0-1) and are 1st in the Mountain Division….the Wichita Thunder have lost eight straight (0-8-0-0) games and have played 10 more games at home already this season (19 to 9)…. Toledo has 15 wins on the road already this season – which is more than 10 teams total win totals this season…. Former Shark Peter Sivak leads the ECHL with 24 goals in 31 games….Former Shark Vincent Arseneau leads the ECHL in shorthanded goals (3)… Former Shark Riley Gill leads the ECHL with five shutouts – no other goalie has three… Rapid City has the best power play on the road this season (25%) but rank 25th on home ice at 11.7%…. the South Carolina Stingrays give up the fewest amount of goals per game (2.67).

Check out the 1-on-1 interview with Cliff Rucker in the Telegram by clicking HERE.  Congrats to Team USA in winning the World Juniors Championship in Montreal after a 5-4 shootout win in the Finals over Team Canada – it was an AWESOME hockey game! As of today I have 281 days until the Railers home opener at the DCU center on October 17 – just saying! That will do it….  If you have a question…. shoot me a line at EricL@RailersHC.com.  Until next time…. HOCKEY, HOCKEY, HOCKEY…WOO!