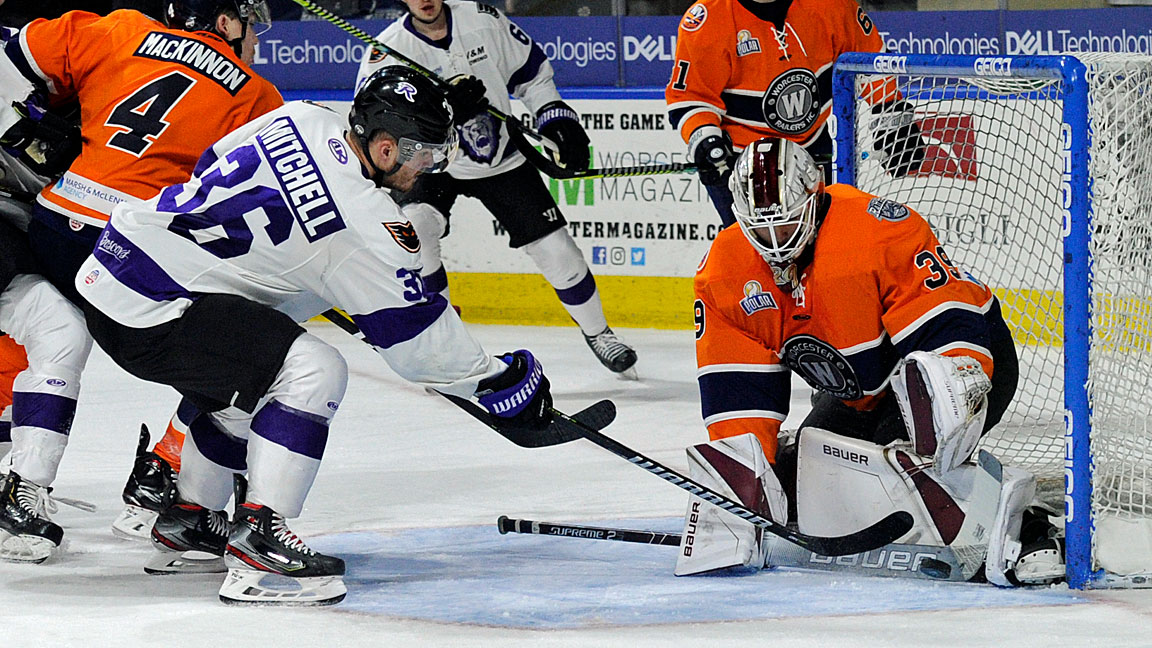 Meeting 2 of 13 vs. Reading this season

Nic Pierog (2-0-2) scored his third short-handed goal of the season, the Railers sixth of the year, while Drew Callin scored his first goal of the season and Ian Milsoz made 31 saves in net in his first professional game collecting the win and first star. Marly Quince scored the only goal for Reading while Kirill Ustimenko made 25 saves in the loss.

Jordan Samuels Thomas short-handed started up the left-wing wall and after cutting around the defenseman Kirill Ustimenko made the initial save but there was Nic Pierog (7th) to slam home the rebound to give Worcester a 1-0 lead with just 3:52 to play in the first period. Worcester was a perfect two for two on the penalty kill in the first 20 minutes and took a 1-0 lead into the dressing room after 20 minutes. Ian Milosz made stopped all nine shots he face as Worcester outshot Reading in the first frame.

After winning an offensive zone faceoff Jack Stander blasted a shot on net from the left point and Drew Callin (1st) was on the door step to bang home the rebound to increase the Railers lead to 2-0 at 13:54 of the middle period. Ian Milosz made 12 saves in the period to remain perfect in the contest stopping all 21 shots he faced through 40 minutes of play. Shots were in favor of Worcester 24-21 through two periods.

Marly Quince (2nd) made things interesting when he roofed one over the right shoulder of Ian Milosz at 3:14 of the third period to cut the deficit down to 2-1. The Royals pulled goaltender Kirill Ustimenko with 2:50 remaining in regulation and Nic Pierog (8th) at 17:59 and Dante Salituro (5th) at 18:49 would add empty net scores to give the Railers a 4-1 win on home ice.

Notes: Three Stars: 3rd star…. Nic Pierog (2-0-0, +2, 7 shots) 2nd star: Jack Stander (0-1-1, +2) 1st star: Ian Milosz (31 saves, Win) ….final shots were 32-29 for Reading…. Kirill Ustimenko (9-3-4) 25 saves on 27 shots for Reading.… Ian Milosz (1-0-0) made 31 saves on 32 shots for Worcester while Evan Buitenhuis served as the backup…. Worcester went 0-for-2 on the power play while Reading 0-for-6…. Ivan Chukarov, Anthony Florentino, JD Dudek (inj), Barry Almeida (inj), and Tanner Pond (inj) did not dress for Worcester…. Mike Cornell, Jakub Skarek, and Linus Soderstrom are currently on recall with the Bridgeport Sound Tigers…. Ian Milosz made his pro debut in net for Worcester making 31 saves and earning first star of the game…. Drew Callin scored his first goal of the season…. Nic Pierog scored his third short-handed goal of the season and is tied for the league lead and lead all skaters with seven shots….. Jordan-Samuels Thomas leads the league with five short-handed points…. Ryan MacKinnon (0-2-2) added two assists for his second multi-point game of the season…. Cody Payne (0-2-2) added two assists…. The Railers recorded back to back wins for the second time this season….Worcester is now 12-9-0-1 all-time vs. the Royals and 8-2-1-0 at the DCU Center.

What’s on tap – Allen at the DCU Center For First Visit!

On Wednesday, Dec 18 the Railers host the Allen Americans at 7pm on a 2-3-4 Weekday.  Score $2 popcorn, $3 soda, and $4 Bud Light in the Bud Light Lounge!  Show your Price Chopper Market 32 Advantedge Card at the Box Office for a $5 discount on all tickets purchased.