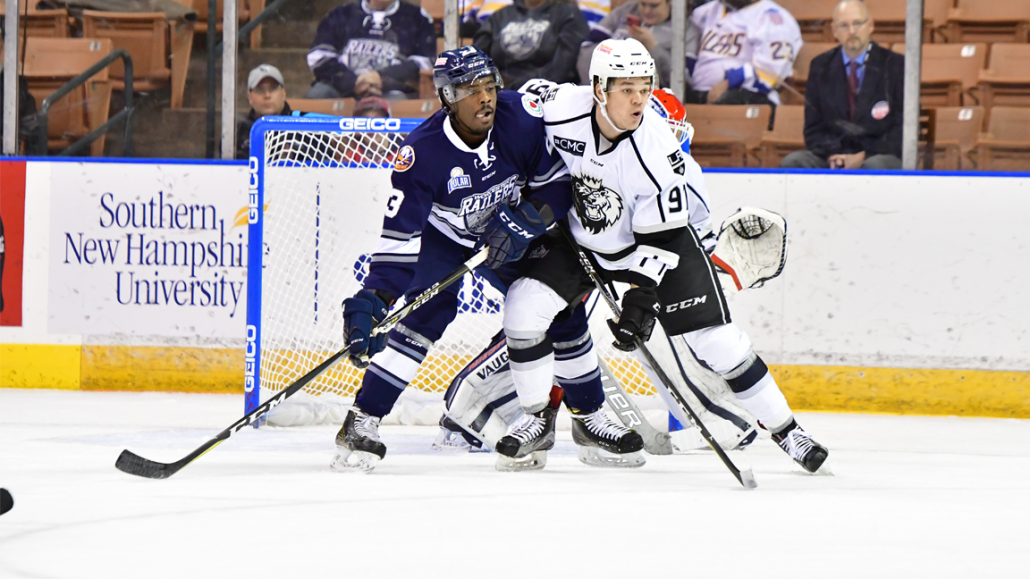 Meeting 4 of 15 vs. Manchester this season

No Sunday Funday for Railers in Manchester

Patrick McNally and Wade Murphy scored for Worcester while Eamon McAdam made 32 saves in net.  Manchester had five different goal scorers and Evan Cowley made 31 saves as the Monarchs extended their point streak to seven games with the win.

Manchester struck first in the opening period as Kevin Morris (7th) broke down the right-wing side on a 2-on-1 and snapped a shot off the post and past Eamon McAdam at 4:43. Each team went 0-1 on the power play as Worcester outshot Manchester 13-9 through 20 minutes of play but trailed 1-0.

The Monarchs would go ahead 3-0 after Craig Wyszomirski (2nd) fired a bouncing puck from the point and through a screen at 16 seconds of the middle frame followed by Cory Ward (5th) who ended up all alone on top of the crease at 7:23. Yanick Turcotte (7th FM) got the boys fired up with a great scrap at 16:15 with Martin Nemcik (1st FM) and the Railers responded.  With 45 seconds left in the frame, Patrick McNally (6th) fired home a power play tally from the point to get the Railers on the board.  Worcester trailed 3-1 after 40 minutes despite leading in shots 25-19.

Matt Marcinew (5th) struck on the power play at 9:52 to put Manchester ahead 4-1 in the third period.  Wade Murphy (3rd) scored on a tough angle shot from the right side at 11:32 to get Worcester back within two goals.  Zac Lynch (4th) would add an empty netter at 17:54 as the Monarchs swept the two-game set with a 5-2 home victory.

Notes: Three Stars: 3rd star: Craig Wyszomirski (1-0-1)  2nd star: Cory Ward (1-1-2) 1st star: Matt Marcinew (1-1-2) …Final shots were 37-33 in favor of Manchester… Evan Cowley (3-2-1) made 31 saves on 33 shots for Manchester…. Eamon McAdam (2-2-1) made 32 saves on 36 shots for Worcester…. Mitch Gillam served as the backup goalie for the Railers….Worcester went 1-for-4 on the power play while Manchester went 1-for-2….Ashton Rome, Frankie DiChiara, Matt Gaudreau, Ryan Lannon, and Connor Doherty (inj) did not dress for Worcester…the Railers and Monarchs are in the middle of a stretch where they play each other four times in nine days….Yanick Turcotte picked up his ECHL leading 7th fighting major….Chris Langkow added two assists for Worcester.

Coming up….
On Tuesday, November 14, the Railers host the Brampton Beast at 10:05am for the city’s first ever pro hockey School Day Game. Over 4,000 students from the Worcester Public School System is expected to attend.  The game is also open to the general public and Railers HC members.  The game will be televised live on Charter TV3 with a replay at 7pm.